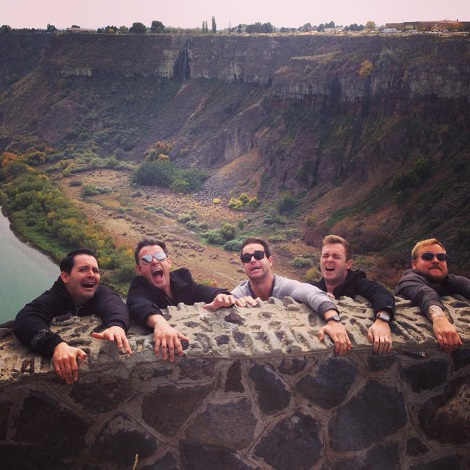 In the spring of last year, we thought we’d seen the last of Brandon Roundtree, Alex Howard, Ryan Tinsley, Corey Thomas and Jason Marshall at their farewell performance at The National.

In the spring of last year, we thought we’d seen the last of Brandon Roundtree, Alex Howard, Ryan Tinsley, Corey Thomas and Jason Marshall at their farewell performance at The National. If those names aren’t ringing any bells, let me remind you with one little word that ties them all together: Conditions.

Ah yes, now your memory is jogging back to the good ol’ days of the hometown rock band that you jammed out to in your car on a nice sunny day with all your friends as you blew your speakers out cruising down the road with the windows down to nowhere.

The local group rose to fame on the love of their fans with three hit albums, and a spot on Warped Tour. However after a tour in 2013, the band decided to walk away from the spotlight leaving us with one final show in 2014…or so we thought.

To our delight, Conditions has decided to reunite this Friday for a show at The Canal Club in honor of the 5th anniversary of their Fluorescent Youth album. Yes, get ready for the screaming and moshing because the band is back and playing their first full-lenth album in its entirety.

Guitarist Alex Howard said the band is psyched to come back to their old stomping grounds to play these songs for their fans again.

“Fluorescent Youth was our first full-length, so it’s really special to us after being a band that only released EPs, shopping around to labels that told us how we should sound,” Howard said. “The album was a culmination of taking the route we wanted to take, and I think that’s why a lot of people have drawn connections to it.”

Conditions put out three albums under the record label Good Fight Records including Fluorescent Youth in 2010, Full of War in 2013 and Missing Hours a year later right before they disbanded. And for those that don’t know the alternative-rock band for some weird reason, you could compare them to the likes of Blink 182, All American Rejects, Yellow Card or Jimmy Eat World.

And this will be a big homecoming for the band, which formed in 2006, to not only play in RVA, but at the Canal Club, where they played in 2013 for their Full of War CD release.

“Early on as a band, we always felt like Canal Club was home to us,” Howard said. “The staff treated us great, the shows were wild and it was always a fun time. We hope that that same energy is still alive today!”

Their sound is very upbeat and positive and unlike many other bands that ride their way to popularity on lyrics centered around sex, drugs, or money, Conditions never took that route.

“[Our lyrics are] more just talking about life and going through it, learning your way through, and kind of picking you back up,” Howard said in a 2014 interview with RVA Mag. “I want people to turn to that if they’re having a tough time, and help them get through a tough time in their life.”

The band’s songs are ones of purpose, meaning and substance, something refreshing that bands coming out these days could take a cue or two from.

The band has meant a lot to each member over the years and Howard said the farewell show was bittersweet in its own way.

“It was an incredible way to properly send off eight years of touring full-time in Conditions, and going our own ways,” he said. “The turnout was great, and we heard from people that traveled from all over the country just to come see it.”

With quick success, constant touring, hectic scheduling, and creative differences many bands usually split when it’s too late. They’re either hanging on to a dream that died a long time ago or they’re at each other’s throats and can’t even be in the same room.

But not Conditions. Howard said the band knew when enough was enough and it was time to take that final bow, close the curtain and go out on a good note.

“We just felt like we had hit a ceiling,” Howard said. “We wrote music and toured relentlessly, and after eight years of having to work odd jobs in between tours just to make ends meet, we were burnt out. We decided it was right to hang it up while we could be proud of what we had done, rather than drag it out to a potentially ugly ending like a lot of bands do.”

Fast forward to today, the five guys that make up Conditions are all doing something a little different.

“Everyone is kind of up to their own thing these days, but we all still talk frequently,” Howard said. “Jason and I actually live together in Richmond. Corey moved up to Brooklyn and is working there, Brandon just got engaged and is working in Richmond, Jason is finishing his degree at VCU, Ryan is working in Mechanicsville and I am a touring guitarist for Sleeping With Sirens.”

Conditions has built a huge following here in Richmond over the years and Howard said the band will still get the occasional request from companies and musicians beckoning for a comeback.

“We’ll get emails from bands wanting to play shows or management companies wanting to bring us back which is pretty funny,” he said. “We’re grateful for Richmond being our home and always treating us like family.”

Speaking of a comeback, the days of Conditions performing to packed crowds cheering their name and singing along to their songs might be gone for the time being, but Howard hinted that new material from the band isn’t completely out of the question. (yes, you can breathe now Conditions fans).

“I think we’re all fairly open to the idea of making music,” he said. “It was the business that comes with it that had turned us off I think. We all love writing music, it’s why we started in the first place, so if we can afford to put the right amount of time and effort in together then I think it’s a possibility. No real talks or plans of anything yet, but I think it’s possible in the future.”

Howard said coming back to play their first full-length album gives the band a sense of happiness and nostalgia and allows them to think back to the days when they looked out over a vast crowd, play their hearts out and feed off the crowd’s energy.

“I know that when the five of us got up there, there were stories and memories behind the songs that energized all of us,” he said. “We’re all looking forward to playing together again and just having fun with it. No more van payments, owing the label money, etc…just back to the basics of getting up there and having fun.

Syke, a company that hosts and sponsors concert events throughout Virginia, is putting on the Conditions show.

Conditions will play at The Canal Club Friday, Sept. 4 with Broadside, Underdog Champs and When Cities Sleep. $10. Grab your tickets here.