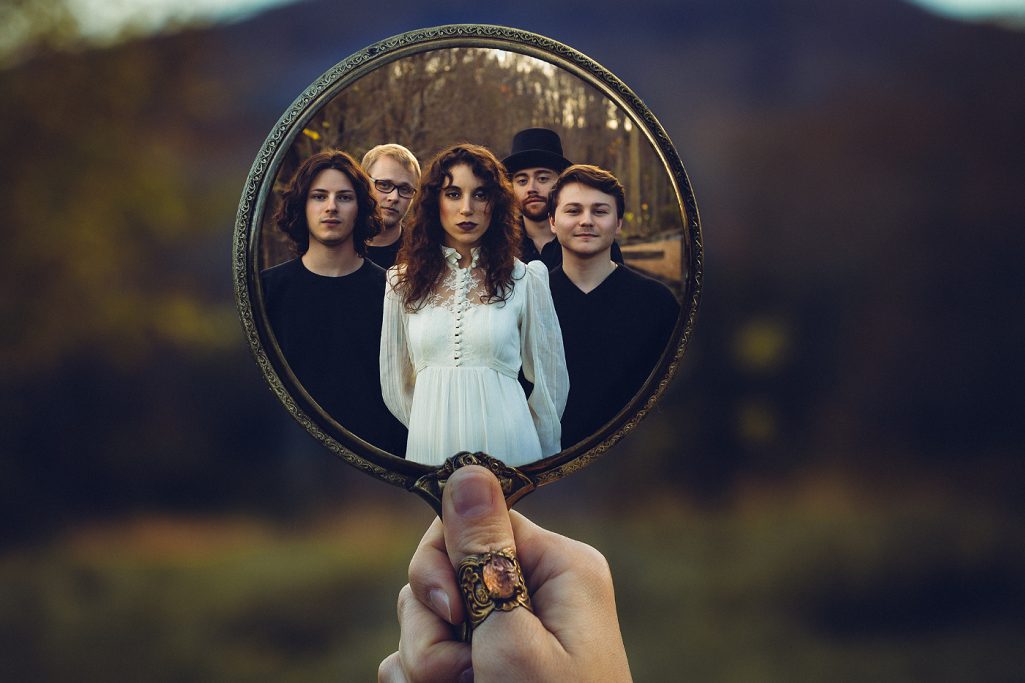 Charlottesville-based band Dropping Julia, fronted by singer/songwriter Jules Kresky, is finding their sound with their latest single, “My Room,” which will greet the world this Friday, at the dawn of a new year.

Jules Kresky, frontwoman of the Charlottesville-based band Dropping Julia, grew up in a musical family. Although she rebelled from the familiar path, she fell in love with guitar in college, and when she moved to Virginia at 23, she knew she wanted to play music professionally. After experimenting with a duo, leading different bands, and trying her hand at open mic nights for singer-songwriters, she formed Dropping Julia — a five-piece funk rock band with a groovy sound and grand ambitions.

Dropping Julia is Kresky, drummer Sean Bracken, guitarists Sam Passe and Alex Bragg, and bassist Sebastian Nikischer. Kresky and Bracken spoke over the phone about their journey as a band and their new single, “My Room,” which will be released on January 1.

Dropping Julia has been a years-long journey to this point for Kresky, who formed the band with different members over two years ago. Since then, the current lineup has fallen into place.

“They all either were filling in for a different band member and then ended up being full-time, or circumstantial things happened which brought us all together,” Kresky said. “It ended up we just became this little family.”

The band grew close quickly, which Kresky attributes to their heavy travelling around Virginia and Maryland. With a home base in Charlottesville — which Kresky notes has a strong, jovial music and singer-songwriter community — Dropping Julia journeyed around the region, playing different venues and releasing two records, Wake Up in 2019 and In My Sleep in 2020.

When the pandemic hit, Dropping Julia had to scrap their plans for the year, which had included an east coast tour for In My Sleep. In warmer months, they found ways to play for socially-distanced, outdoor audiences at wineries to keep their momentum as a band going. They also kept rehearsing and writing new material, recording their new single and another track.

You can hear hints of the evolution of Dropping Julia on “My Room” — an imaginative, funky song where Kresky embodies a young girl sent to a therapeutic reform school. Kresky’s rich, clear voice makes her an ideal storyteller, paired with her poetic lyricism and the lush soundscape of the band behind her.

Bracken connects the lyrics of the song to how many people feel about lockdown — shut up inside, time blending together, and anxiety’s imagination when faced with the mundane. In the chorus, Kresky sings, “Wake me up after the winter’s through / til then I’ll be locked up inside my room.” While the song’s narrative tells a different story, the similar feelings resonate with the listener. Kresky said her songwriting process lends itself to that kind of thematic crossover.

“I wrote about a past situation, but I wrote it today,” Kresky said. “Some of the things I’m feeling and going through today probably bled into that.”

“My Room” is a dream-like song, but it’s far from sleepy — from the track and in conversation, it becomes clear that this is a band who is now unafraid to take risks because of the comfort they’ve established with each other.

“It’s a safe space for emotions, but it’s also a safe space for us to write music that maybe we wouldn’t have normally done,” Bracken said. “Now I’m so much more comfortable because you can play something that maybe doesn’t sound great, but if you’re bouncing it off people who respect you as a musician, some good product is going to come out of it.”

Bracken talked about the drum beat for “My Room” in particular — which he said he never could have imagined writing even six months ago. Kresky also took advantage of being able to experiment with a group of supportive people, and discussed how easy the recording process was for the new songs, even though the current lineup had never actually recorded anything all together.

“It was a humorously easy song to produce and then record,” Kresky said. “Everyone was just laughing and having a great time, it was such a breath of fresh air. I went into it so stressed out because I always do, and because of different experiences, but I left feeling so confident.”

The solidifying sound of Dropping Julia is a confident mix, the product of collaboration and Kresky’s mining of issues she’s passionate about exploring — from dreams and storytelling to social justice and feminist issues. With the band behind her, Kresky has said her ability to engage in topics she may have shied away from before has increased.

“Once I started to create my own band I felt this really big sense of urgency and authenticity for myself,” Kresky said. “I felt okay with writing about those things. Once I learned that and how good it felt to start being really honest in my songwriting, those things started popping up in most of my songs.”

Bracken recognized Kresky’s evolution as a performer as well, and the band’s role in supporting her as a frontwoman.

“When we first started the band it used to be this little timid girl behind a giant acoustic guitar timidly singing about things that were important to her,” Bracken said. “And now she’s got a full band behind her and instead of softly talking about these things she’s practically yelling about them.”

Like many bands, Dropping Julia is eager to get back on the road when it is safe to do so. With 2020’s In My Sleep and the new songs, there’s plenty of material for a tour, and more waiting in the wings.

“We have so many songs we’re itching to record and release, but we just haven’t yet, because it’s hard to record more music when there’s kind of still a question mark as to how and when we’ll be able to release it and play it,” Kresky said.

If “My Room” is any indication, Dropping Julia will be a band to watch for intriguing, funky, and imaginative music in 2021 and beyond.

Robin Schwartzkopf is a writer from Richmond, Virginia, currently studying Media Studies and English at the University of Virginia. She enjoys exploring stories about pop culture, the arts, and film. In her free time, Robin loves watching basketball and crafting with her roommates.