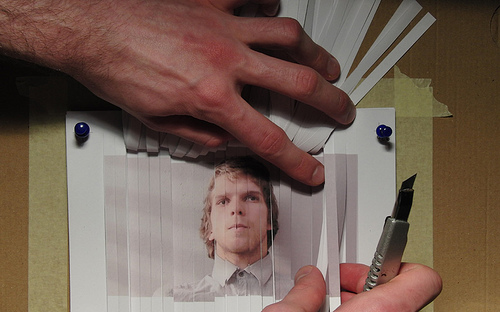 The music video for “Everytime” by Oi Va Voi caught my eye with the simple but very time consuming technique used to bring the concept to life. Every third frame was printed out and put through a shredder then put back together for a look reminincent of Peter Gabriel’s stop motion “Sledgehammer” video from back at the inception of MTV. Not many people with today’s tech would go this route, so I tracked down the duo behind it.

The music video for “Everytime” by Oi Va Voi caught my eye with the simple but very time consuming technique used to bring the concept to life. Every third frame was printed out and put through a shredder then put back together for a look reminincent of Peter Gabriel’s stop motion “Sledgehammer” video from back at the inception of MTV. Not many people with today’s tech would go this route, so I tracked down the duo behind it.

Katarzyna Kijek & Przemysław Adamski are a pair from Poland that have several very creative works on Vimeo. They were kind enough to answer a few questions for us at RVA about making the video.

RVA: Would you mind explaining the dynamic/relationship between the two characters?

Katarzyna: These people are a couple in real life, so in a way they are not just fiction characters in love as usually in films or videos. (if I understand the crux of the question well)

RVA: What inspired the creative direction behind the video?

Katarzyna: It was pretty much last part of the song where male and female vocal blend. We were trying to show the idea of two “worlds” permeating each other and visualize how one person becomes a part of another this way. Narrow stripe of paper suited well as a modul. Plus had all the connotations of destructivness which we found between lines in the lyrics of “Everytime”.

RVA: Did you find yourself at any point thinking that this might be too much work or that it might not work out?

Katarzyna: As a matter of fact the whole undertaking was an experiment, so it might as well be a failure. But on the other hand rules of this process were so simple that it couldn’t go too wrong.
And since almost every our project is time-consuming, we are not scared any more.

RVA: What are you working on next?

Katarzyna: We are preparing to make a short movie called “Noise” which will be based on concrete music. Polish Film Institute is involved, so we hope it will go smoothly.

Thank you for your interest in our work.

————————>
———–> Information on the band Oi Va Voi <----------- Out of London - Oi Va Voi’s third album ‘Travelling the Face of the Globe’ is the sound of a band absolutely at the top of their game. All the elements that the band has developed over the past five years are realised with new found confidence and independence. The band have returned to their roots, taken control of every aspect of their career and reunited with the Grammy award winning producers of “Laughter Through Tears”, Kevin Bacon and Jonathan Quarmby. “Travelling The Face of the Globe” opens beautifully with the melancholic yet uplifting ‘Waiting’. Second song; ‘I Know What You Are’, showcases the wonderful, smoky vocals of lead vocalist Bridgette Amofah: “I look up at the sun rising, I know what you are”. The album unfolds gradually as Steve Levi’s haunting vocal juxtaposes with violinist Anna Phoebe’s soaring violin work beautifully. Here is a band that is completely at ease with themselves and their position in the world of music. In Amofah Oi Va Voi have found a singer that can use the power of her voice to dramatic effect and yet still remain vulnerable. Elements of Nina Simone and Shirley Bassey combine with a contemporary urban approach to create a sound all her own with the ability to touch and disarm. On more up tempo songs such as the title track “Travelling The Face Of The Globe” and “Long Way from Home” trumpet player Dave Orchant and Levi play fiery klezmer/gypsy/Balkan lines while Amofah’s vocal and fly on top of the engine of the band’s driving rhythms – Josh Breslaw (drums) and Lucy Shaw’s (bass). Nik Ammar’s beautiful picking guitar lines on Foggy day echo those found on songs like “7 Brothers” and “Ladino Song” from the “Laughter Through Tears” album. In true Oi Va Voi tradition the new album also features wonderful guest vocal contributions. Agi Szaloki, who sang the haunting “Dissident” on the group’s second album; “Oi Va Voi” returns to feature on the Yiddish song “S’brent”. Inspired by the folk song of the late 1930s and 40s, “S’brent” tells of the horrors of a burning town whilst elders look on. Szaloki’s Yiddish vocals with their spine-chilling filmic quality drift across the Voi’s beautiful musical canvas. Oi Va Voi have always been prepared to take risks and rip up the rule book. Legendary French singer Dick Rivers closes the album with the anthemic “Photograph”. His deep, world weary vocal resonates as he plays the part of Emile Zola reminiscing on his struggle to tell the truth of events during the Dreyfus affair 19th century in France. In “Travelling the Face of the Globe”, Oi Va Voi have finally distilled the lives and influences of 7 Londoners. The band have melted the music of their heritage with the sounds of contemporary London and created songs that will touch and inspire.