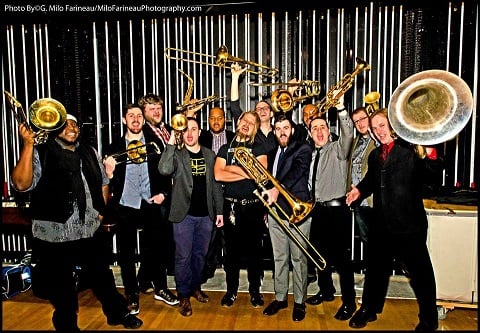 Fresh off the high of their single premiere on The Tonight Show’s tumblr, NO BS! Brass Band heads to The Broadberry tonight

Richmond’s favorite brass band NO BS! hits The Broadberry tonight bringing their snazzy jazz and in your face funk that you know and love alon

Richmond’s favorite brass band NO BS! hits The Broadberry tonight bringing their snazzy jazz and in your face funk that you know and love along with them. NO BS! Brass Band takes New Orleans brass to another level with their elements of James Brown, John Coltrane, Michael Jackson, and Led Zeppelin. But you already knew this awesomeness if you’ve ever seen them live. And if you haven’t, well I don’t know what you’re doing with your life.

The huge brass ensemble got a nice shoutout from The Tonight Show last night. Jimmy Fallon premiered their new jam “Brass Knuckles” on the show’s tumbler page and it is, well awesome. Give it a listen below.

The band has been busy this summer and has had the pleasure of sharing the stage with Bon Iver and Sufjan Stevens this July at the Eaux Claires Festival in Wisconsin. They also peformed alongside other big name bands such as The Tallest Man on Earth, Sturgill Simpson and SPOON.

NO BS! is dropping the new album November 20th and tonight’s show will kick off their fall tour which will take them all up and down the East Coast. Check out tour dates here.

Get tickets to their Broadberry show here.

Amy David was the Web Editor for RVAMag.com from May 2015 until September 2018. She covered craft beer, food, music, art and more. She's been a journalist since 2010 and attended Radford University. She enjoys dogs, beer, tacos, and Bob's Burgers references.
Topics: brass, No BS! Brass Band, rva music, The Broadberry