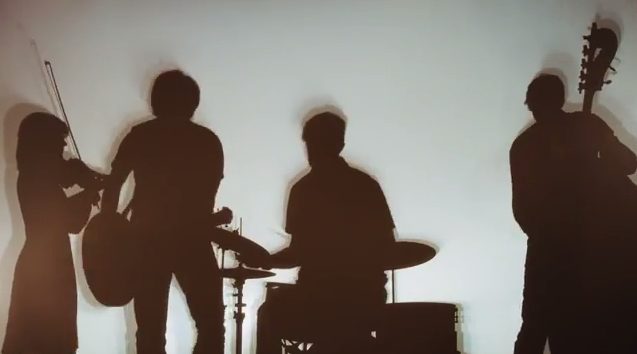 Richmond’s own prog/indie/hootnanny mainstays Goldrush have released a new video for their song ‘Om Shanti’ and it’s a keeper.

Richmond’s own prog/indie/hootnanny mainstays Goldrush have released a new video for their song ‘Om Shanti’ and it’s a keeper.

The song is a ‘casual but trippy experience,’ said Prabir Mehta, Goldrush’s front man. “It was written in India in 2011 and has since then turned into a band staple.”

‘Om Shanti’ made it onto their debut album, “Greatest Hits” which released late last year.

A certain degree of radiance is simply baked into the Goldrush experience — between frontman Prabir Mehta’s expressive vocals, Treesa Gold’s shining violin and the band’s knack for writing catchy hooks, it’s just kind of there. But there’s darkness “there,” too. Second track “If You Want Me” kicks off with a yearning two-part string arrangement, laying a bittersweet foundation for a tune that ends with a major chord but conveys major doubts as to whether the narrator’s devotion will be rewarded. There’s also the more minor-sounding “You Won’t See Me Crying” — a title I just love, as it can mean two exactly opposite things — and strolling blues tune “Stuck And Lonely.”

“The song’s origin is a play on an ancient phrase that still has relevance in both a spiritual and contemporary slang setting,” said Mehta. For this vibrant and bouncy video the band teamed up with local production company Double Take.

Come check out Om Shanti live when Goldrush plays Hardywood with Anousheh and Patrick Bates on Nov 26, the day before Thanksgiving.