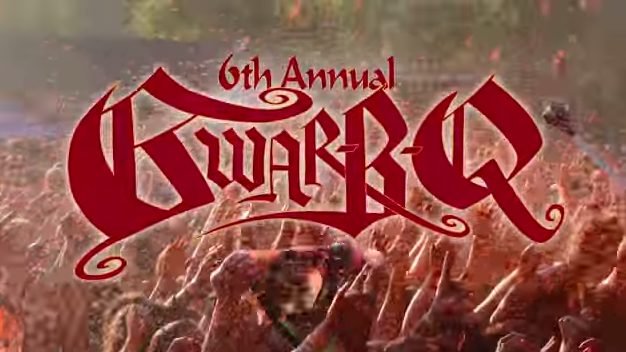 GWAR-B-Q 2015 gets a date and announcement video

Just a one year and a few days after the passing of front man Dave Brockie, GWAR has announced the date for the

Just a one year and a few days after the passing of front man Dave Brockie, GWAR has announced the date for the GWAR B-Q 2015 and released a crazy video supporting the event.

Look’s like we’ll be getting covered in blood and drunk as hell at Haddad’s come Saturday, August 15th 2015.

Here’s some more details about the event below via GWAR’s facebook page:

Come celebrate GWAR’s 30th year of conquest on this fucking shit-hole planet at the most ear-bursting, bone-crushing, mouth-watering, belly-bursting, beer-guzzling, nut-bustingest party of this or any summer! The date is set for the 6th Annual GWAR B-Q: Saturday, August 15 at Hadad’s Lake (7900 Osborne Turnpike Richmond, VA 23231).

This amazing milestone in GWAR’s torrid history – 30 fucking years! – demands more than just a one-day party. The Scumdogs have set forth a slew of satellite events to be held across Richmond over the three-day weekend of August 14th through 16th. GWAR fans will be busier and more fulfilled than during any time in their miserable existence!

We’ll give you updates as they get released.