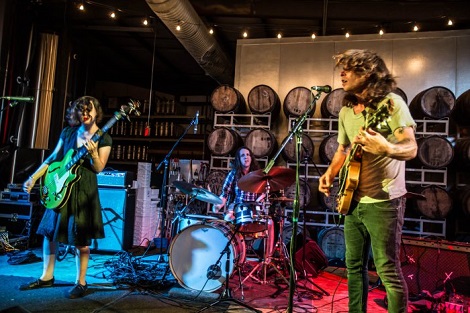 “We were in Louisiana, I guess it was really Baton Rouge, at a gas station, and the attendant noticed and complimented the upside down cross necklace I had on,” said Skye Handler, guitarist and singer

“We were in Louisiana, I guess it was really Baton Rouge, at a gas station, and the attendant noticed and complimented the upside down cross necklace I had on,” said Skye Handler, guitarist and singer for the band Lady God. “And that’s when I realized she was a vampire!”

“She had real fangs…like surgically implanted into her skull…I never heard of that before,” he said. “We wanted to get a picture with her, but I left my Polaroid at home by accident…but I guess it was a good thing because she wouldn’t have shown up anyways…”

Local band Lady God left about a week and a half ago to tour and promote the aptly titled new seven inch Lady God #2, which they recorded with John Morand at Sound of Music Recording Studios.

Handler apparently had other intentions.

“We’re really out here to beat the piss out of the other bands,” he said. “We’re pissed and ready to vanquish!”

Except for the weird vampire truck stop experience, the band’s second tour experience has been relatively mellow.

Chrissie Griffith, bassist and singer, said the band chose to tour the South—with stops in Georgia, Florida, Texas, Arkansas, Tennessee, and Virginia—because they have roots down here and and have friends in town to show them around.

The ban was birthed in 2014 at Virginia Moonwalker, a Mechanicsville recording studio where they released Lady God Presents: The Pebbles on vinyl, which was produced by Russell Lacey.

The band’s pace for this tour has been relatively relaxed compared to their previous tour, during which Handler suffered from untreated Lyme’s Disease, which the band said is a bummer because they’d rather “be running than sitting around.”

“I don’t want to be comfortable on stage,” Handler said. “I want there to be an Evel Knievel vibe, you know? Like it could all end at any moment…”

The band stressed the importance of making mistakes for the band to be creative.

“People want everything to sound crisp, clean, perfect…and it’s really their insecurities…they can hide behind this wall of sound,” Handler continued.

Lady God have a 60s-retro garage-rock sound full with some psychedlelia thrown in, however they like to describe their sound as sort of a “vintage rock n’ roll salad we call “Slink.”

Drummer Tim Falen confirmed their “fly by the seat of their pants” strategy.

“I don’t know shit usually…and so I never play songs the same way ever,” he said.

The band carries this attitude into their recording sessions as well according to Griffith who emphasized that you have to be open to new things.

“With this recording we did some new stuff, and not all of it was good,” she said. “But, it’s important to take risks for the sake of making the best music.”

Lady God kicked off their tour with a release show of Lady God #2 at Hardwood Sept. 18 and the band had a show Wednesday in Harrisonburg, Va., at The Golden Pony where they played alongside The Diamond Center, who will come to Black Iris in RVA tonight for their own album release show.

The band said they look forward to seeing people dance at their shows…or get too drunk and do something crazy. Or shake a tambourine. What they don’t want is to see people standing around with their arms folded.

“I do it all the time, listen to Jumping Jack Flash and stare at my fridge at home,” Handler said. “But that’s not what shows are for with Lady God.”

If you missed Lady God at their Hardywood show, you’ll have an opportunity to check out the trio Nov. 28 at Balliceaux, which recently just reopened with a snazzy new place and new menu.