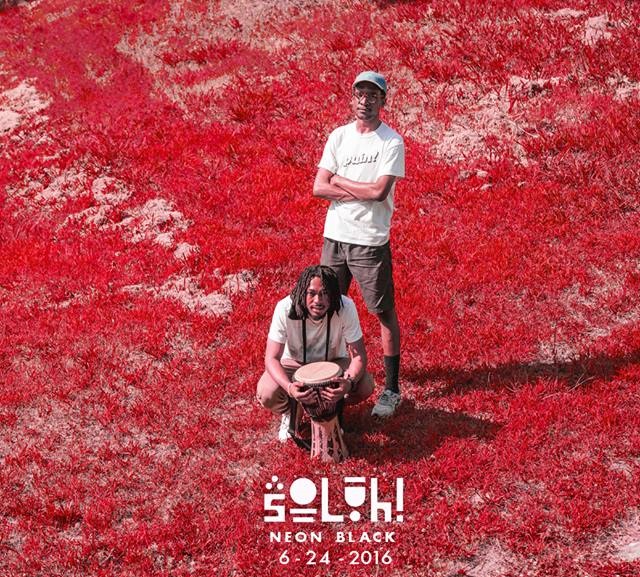 Harris, working as the producer, and Gibsun providing the rhymes, have recently put out a followup to that, a seven-song EP called Neon Black.

The new EP is only about half as long as the debut record, but goes just as hard if not harder and continues to bring as much substance as the previous EP. It’s simple, yet soulful, and sonically appealing.

“For this, I spent some time trying to decide what Neon Black meant as sound, and I tried to reflect that in the samples I chose,” said Harris, when discussing the new album. “Neon Black was supposed to feel like an album you can play in your car over and over again, for your friends while you drive around in the summer weather.”

Soluh! also had the help of local artists Koncept Jack$on and BGKHNAOG for the project.

“The collaborations were to not only expand our fanbase, but to show the alliances in the Richmond music scene,” Harris said. “Max (Koncept Jackson) is a good friend of mine and we are also in a collective together called Mutant Academy, so it wasn’t too difficult to get him on a track with Rob.”

Harris said the duo got their gears turning for the project just after finishing up Incredible Heat Machines and they’ve been working on the production for the EP for the last two and a half months. Neon Black officially dropped June 24.

“The whole project, with the exception of two tracks, was recorded at the studio of a musician and mutual friend of ours, Luke, also known as, Big Kahuna OG, who was also integral to the mixing process of this project”,” he said.

Vocalist and writer Rob Gibsun, the other half of Soluh!, said he began writing material for the EP in mid-March.

“The phrase “Neon Black” began as a writing prompt from 2011 National Book Award winning poet Nikky Finney,” Gibsun said. “After pitching the title to Jefferson, and delving into a brainstorming session, our intent was to answer ‘Who is Neon Black? What does Neon Black sound like?’”

And I believe the hip hop pair did just that. You can close your eyes and visualize what’s going on in each song by the beats that Harris has provided and Gibsun has painted a riveting, raw picture with his words. Their experimental sound is very different from what’s going on in the city’s hip hop scene, in a good way. It’s versatile and unique and between Gibsun’s powerful flows and Harris’ beats it makes for another successful album for the two.

The beat off “Coils”, the third track on Neon Black, is especially sick and catchy, and the track “Counterfeit Diamond Pendant” with RVA hip hop artist Koncept Jackson, is super dope and sounds like a mash-up of old school seasoned hip hop with young voices backing it.

Incredible Heat Machines dealt with much hardship and personal experiences from Gibsun. It also featured field recordings produced by Harris with everything from water from a local park to a space heater. For Neon Black however, Harris said the two wanted a more stripped down EP.

“I wanted to capture the overall feelings of each track, quickly without a lot of extra bells and whistles, while keeping in mind the brevity of the project as a whole,” he said. “I tried to really let the samples do the talking.”

Neon Black is available online and you can purchase that here. And Harris said the duo isn’t slowing down on their project anytime soon either. Plans for another LP are in the works for the near future.

“I’d like to have that out by early next year, but i’m not going to rush it,” Harris said.

Catch Soluh! at their Writer’s Block Variety Show this Saturday July 23rd at the Firehouse Theatre at 10:30 PM. $5 cover.