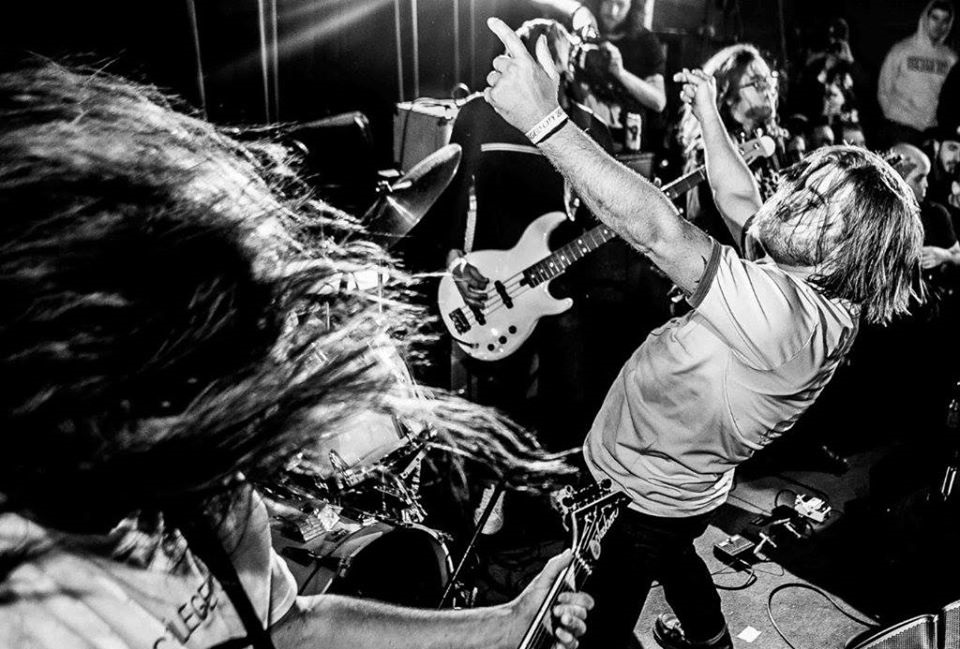 RVA Mag #38 is on the streets now! Here’s another article from the issue, featuring a conversation about all things crossover between Iron Reagan’s Rob Skotis and Enforced vocalist Knox Colby.

On the heels of their debut LP release this summer, Enforced is amping up their name in Richmond and throughout metal and hardcore scenes with their latest sounds in crossover thrash. Following their tour with Iron Reagan earlier this year, At The Walls dropped in July after their “Skinned Alive” single premiered with Revolver.

The local bands came together again, as frontman Knox Colby sat down with Iron Reagan’s Rob Skotis to talk writing processes, genre breakdowns, and future plans between the two bands in an exclusive interview. Enforced is heading back out on tour this month with High Command, kicking it off with a show on October 18 at Wonderland ahead of their dates across the U.S. and into Canada.

Rob Skotis: I wanted to talk about separation, and how humanity is just repeating itself.

Knox Colby: Oh, yeah, I mean, a lot of a lot of [Enforced’s] lyrics are basically just like, “This is heading off a cliff.” We’re all headed towards absolute fucking disaster. If you don’t see it, I’m sorry, I’m not gonna berate or belittle you. But please see the writing on the wall. I’ll be living in Mad Max in my lifetime.

RS: Yeah. It’s like if people asked if you want to have kids and you’re like, “No. Do you think I’d want to bring someone in this world?”

KC: My mom is so upset. She was like, “You and your brother won’t have kids.” I’m like, “Good.” I’m sorry that you can’t be a grandmother, but I’m not bringing another fucking person to live 80 years into absolute chaos that I won’t live to see. They will. I don’t know what’s gonna happen. It’s a really bad idea.

KC: I really do. I would really love a kid. Three or four, a murder of children would be great.

RS: Talking about all that, trying to find a way to fix it —

RS: One of the things I like asking bands about, because it’s always different: What is your writing process?

KC: Yeah, it is always different. Every band I’ve been in before Enforced was with the same 10 people, since I was 13. So that writing process got so easy, because you’re writing with each other for 13 years. I know who’s going to do what, I know what their ideas are going to be, and what the music they write sounds like. So you’re like, “Okay, yeah, this is all easy. It’s very fluid.” Doesn’t make it good, but it makes the writing process fucking non-existent. You don’t even think about it. Like: “You do that, you do that, I’ll do that like we always do.” Boom. Throw it up.

But with Enforced, it’s a completely different group of personalities that I’ve never worked with. I don’t know how anyone goes about anything. But they had all known each other and been in bands with each other prior, so they have their formula down — I was just the new guy, in terms of the writing group. They already had a demo done, and I just had to put vocals on it. But they were very adamant about “the vocals have to be perfect.” They’ve gotta hit how everyone wants them to hit. You’ve got to get the cadence right. Or, “Here’s how we picture the vocals to be for this.” And that’s so strange, because I’ve never had a kind of frame to put shit in. I’ve always been given free rein.

RS: Do you think having them giving you some constraints actually made you better?

KC: Yeah, because it’s so much harder. I can’t just be like [making drunken opera sounds] whenever I want. So I’ll go through five or six drafts of lyrics. Then we’ll practice it, record it, just do a quick scratch demo, and listen to it a bunch. And be like, “Yeah, no, it’s still not hittin’ like it should,” and change the song. By changing the song, you gotta change the lyrics. Back to square one. Every time. Until it’s absolutely spot on and they’re like, “Yep, that’s good.”

RS: Is there one of the dudes in the band that writes more of the riffs?

KC: Will Wagstaff and Zach Banahan write 99.8% of everything.

RS: Does the drummer construct with them?

KC: Yeah. In terms of what Alex [Bishop] is comfortable doing, what he can do. He can’t do double bass for three minutes straight, [but] I don’t care. I mean, who wants to do that?

RS: I don’t really get it. You’re like… running. Just let me run as fast as I can for a full sprint.

RS: I like that you use double bass and you’re crossover.

RS: That’s great. That’s one thing I always liked about Municipal Waste; they put a lot of double bass into crossover, which took it away more from the hardcore side of things and brought it to the metal side.

RS: That’s great. I think there are a lot more crossover bands popping up now, and a lot of them are full-blown to the Municipal Waste side, where it’s super-fast pizza thrash. Then the other ones are taking it super Power Trip-side. Or like Hatebreed, almost.

KC: The opposite side of party pizza thrash is metalcore crossover.

RS: Yeah, exactly. Taking it that far, but doing a bad job at it.

KC: Both ends of the spectrum are fucking questionable. You gotta get it right. If you get it right, then great. What right is, I don’t know. If it slaps, it slaps.

RS: So my next question is: do you like writing music that slaps?

KC: Do I like writing music that slaps? No. I fucking hate it. It’s hard to do. If I wrote shit that fucking slopped then it’d be awesome. It’d be the easiest shit to do. I could just do it in my sleep. But there’s a difference between slop and slap. You gotta slap. Can’t slop.

RS: Are you guys really into making this a band that you could just tour with for the rest of your life?

KC: We made a blood pact.

RS: So you’re really fucking going for it?

KC: Oh yeah, absolutely. It’s spooky, for me at least, because I’ve had a job since I was 14. So having a job, going to work, doing the grind. No matter what, for 15 years, and still doing music. Neither of them ever intersecting has been a constant. So now it might get to the point where I have to quit my job. That’s great if it does, but that’s super fucking spooky for me. I just turned 29, so it’s like: you really want to quit your job now? At 29? You’ve been doing this shit for about six years. Does that seem like a good idea? No. But that’s really what I want to do.