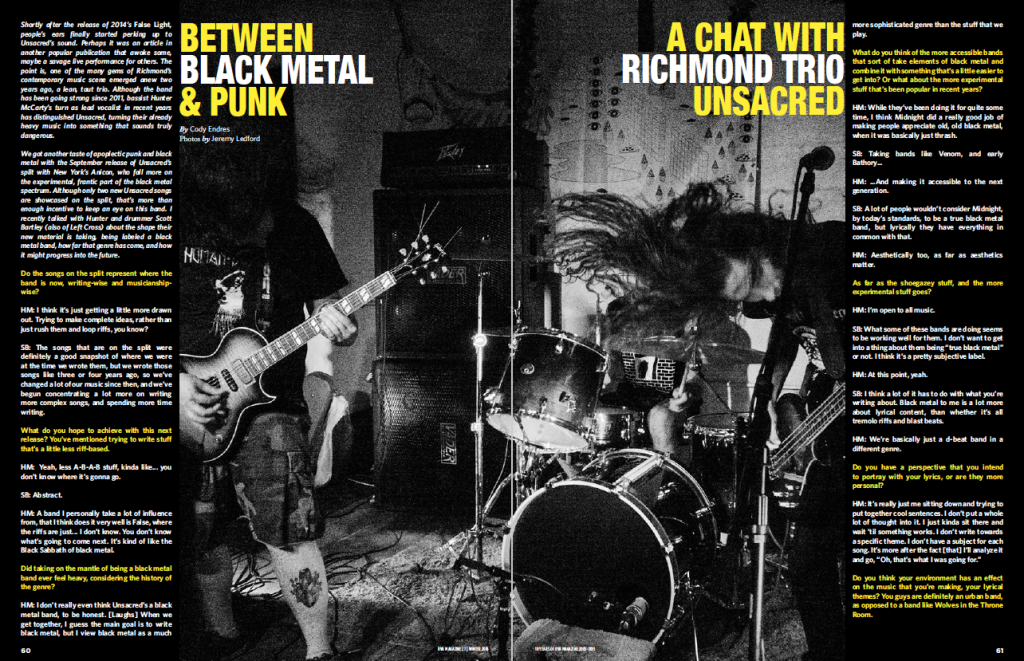 Shortly after the release of 2014’s False Light, people’s ears finally started perking up to Unsacred’s sound. Perhaps it was an article in another popular publication that awoke some, maybe a savage live performance for others. The point is, one of the many gems of Richmond’s contemporary music scene emerged anew two years ago, a lean, taut trio. Although the band has been going strong since 2011, bassist Hunter McCarty’s turn as lead vocalist in recent years has distinguished Unsacred, turning their already heavy music into something that sounds truly dangerous.

This article was featured in RVAMag #27: Winter 2016. You can read all of issue #27 here or pick it up at local shops around RVA right now.

We got another taste of apoplectic punk and black metal with the September release of Unsacred’s split with New York’s Anicon, who fall more on the experimental, frantic part of the black metal spectrum. Although only two new Unsacred songs are showcased on the split, that’s more than enough incentive to keep an eye on this band. I recently talked with Hunter and drummer Scott Bartley (also of Left Cross) about the shape their new material is taking, being labeled a black metal band, how far that genre has come, and how it might progress into the future.

Do the songs on the split represent where the band is now, writing-wise and musicianship-wise?

HM: I think it’s just getting a little more drawn out. Trying to make complete ideas, rather than just rush them and loop riffs, you know?

SB: The songs that are on the split were definitely a good snapshot of where we were at the time we wrote them, but we wrote those songs like three or four years ago, so we’ve changed a lot of our music since then, and we’ve begun concentrating a lot more on writing more complex songs, and spending more time writing. 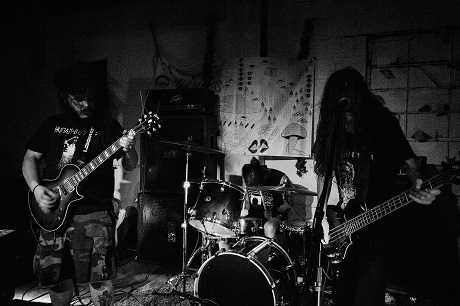 What do you hope to achieve with this next release? You’ve mentioned trying to write stuff that’s a little less riff-based.

HM: A band I personally take a lot of influence from, that I think does it very well is False, where the riffs are just… I don’t know. You don’t know what’s going to come next. It’s kind of like the Black Sabbath of black metal.

Did taking on the mantle of being a black metal band ever feel heavy, considering the history of the genre?

HM: I don’t really even think Unsacred’s a black metal band, to be honest. [Laughs] When we get together, I guess the main goal is to write black metal, but I view black metal as a much more sophisticated genre than the stuff that we play.

What do you think of the more accessible bands that sort of take elements of black metal and combine it with something that’s a little easier to get into? Or what about the more experimental stuff that’s been popular in recent years?

HM: While they’ve been doing it for quite some time, I think Midnight did a really good job of making people appreciate old, old black metal, when it was basically just thrash.

HM: …And making it accessible to the next generation.

SB: A lot of people wouldn’t consider Midnight, by today’s standards, to be a true black metal band, but lyrically they have everything in common with that.

HM: Aesthetically too, as far as aesthetics matter.

As far as the shoegazey stuff, and the more experimental stuff goes?

SB: What some of these bands are doing seems to be working well for them. I don’t want to get into a thing about them being “true black metal” or not. I think it’s a pretty subjective label.

HM: At this point, yeah.

SB: I think a lot of it has to do with what you’re writing about. Black metal to me is a lot more about lyrical content, than whether it’s all tremolo riffs and blast beats.

Do you have a perspective that you intend to portray with your lyrics, or are they more personal?

HM: It’s really just me sitting down and trying to put together cool sentences. I don’t put a whole lot of thought into it. I just kinda sit there and wait ’til something works. I don’t write towards a specific theme. I don’t have a subject for each song. It’s more after the fact [that] I’ll analyze it and go, “Oh, that’s what I was going for.”

Do you think your environment has an effect on the music that you’re making, your lyrical themes? You guys are definitely an urban band, as opposed to a band like Wolves in the Throne Room.

HM: I think it definitely affects the vocabulary that I use, because, y’know, things that I see every day, ideas that are constantly popping in my mind. I’m sure if I was stuck in a forest, living in a cabin, I’d probably use a much different vocabulary. As far as how it influences our music, I don’t know.

SB: I think living in an urban environment can inspire a lot more feelings of being trapped, and I think you kind of underestimate the feeling of isolation. You’re surrounded by so many people in a city. I think that’s definitely inspired a lot of our music, as far as for me.

Historically, black metal has been an outlet for hateful, sometimes regressive thought. Do you think the genre could be used to promote some more progressive, inclusive thoughts, and how might that be received?

SB: Inclusivity outside of the black metal scene I’m sure is really welcome. Within it, probably not so much. It just kind of depends on the bands, who you’re playing to. There are a lot of black metal people that hate and xenophobia are a big part of black metal, and you can’t really deny that. I think a lot of those people were just trying to be the most evil, going further and further into being evil, and then evil becomes hatred. I think inclusivity should be a part of anything. We identify a lot with the punk scene. We definitely want to be as inclusive as possible.

HM: I think black metal is just cool music, so I think cool people are going to appreciate it, and cool people play in other cool bands, and eventually all of the hateful nonsense gets washed out. It still exists, but there are cooler and cooler people that are making black metal that are not exclusive…

HM: They just find other cool things to write about.

SB: There’s hatred in a lot of music. That shit’s everywhere. If you want it, you can find it, but if you don’t want it, you also don’t have to hear it. Living in the time of the internet, a lot of that stuff can be weeded out. A lot of people can just be stuck on these hateful bands. I think no one is making me directly support them, and I think nowadays, people will choose what they want to listen to, and a lot of those bands will just be weeded out, like Hunter said. Most people don’t want to hear that kind of stuff, and the people that do are such a small minority that it’s irrelevant to the majority of the scene, in my opinion.

You guys said that you don’t really think of yourselves as black metal band, more of a punk or d-beat band. Can you expound upon any bit of that identity that you feel is maybe overshadowed by the labels that people give you?

SB: Calling us posers because we don’t listen to enough Satyricon…

HM: I just like to call it a metal band, because metal as a whole is a pretty broad genre. We definitely fit in there somewhere.

Black metal has always felt to me like one of the most punk sub-genres in metal. The early stuff just sounded, maybe unintentionally, crappy.

SB: They would go for the worst.

HM: I think a lot of it was intentional. [Laughs]

SB: They wanted it to sound as gritty and as gross as possible.

HM: They pulled it off.

SB: I really like the idea of that. I don’t think you should necessarily go out and record your demo with First Act stuff. I’m not really advocating that, but I think there’s something to be said for simplicity, and trying to convey an emotion through simpler means.

HM: Just usin’ what ya got.

SB: The whole DIY ethic is a lot more present in black metal than a lot of other stuff.

HM: I just think in modern times obviously, it’s a lot easier to get somewhat better equipment, and make your music sound a little better, so that’s why more people do it — understandably so. I think it would be weird if a newer black metal band came out, and they recorded all of their stuff on USB microphones or something. I feel like it’s just outdated. Not that it’s not cool, because I still listen to Mayhem all the time. It’s 2016, man. [Laughs]

"The religion of one age is the literary entertainment of the next." - Ralph Waldo Emerson

As a hardcore kid that grew up going to shows in the mid-‘80s, having a fest like United Blood in my hometown makes this city very... READ MORE

As a hardcore kid that grew up going to shows in the mid-‘80s, having a fest like United Blood in my hometown makes this city very... READ MORE