Not All For Naught: Brooklyn’s Bear Hands on their pivotal growth before tonight’s Spring Fling event - RVA Mag 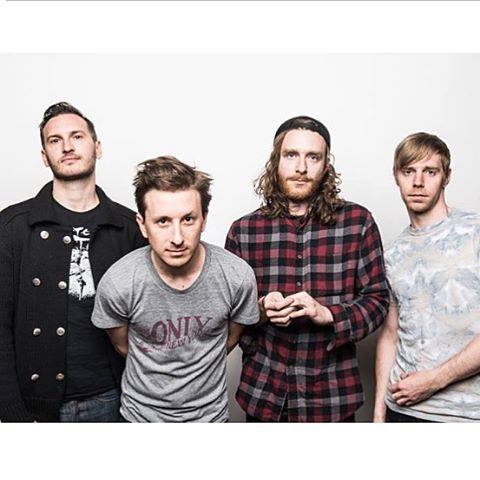 What does alt-rock even mean in 2016? Well, that’s what tonight’s Spring Fling at the Coliseum aims to find out as it brings four remarkable and beloved bands from the genre together for an almost over-booked night of guitar angst and mayhem. It’s a chance to show that the genre most relish in eulogizing still has plenty of life left to live as well as a chance for heavyweights like Cage The Elephant and Silversun Pickups to live up to their lofty success.

But most importantly, it’s a chance for an emerging band like Brooklyn’s Bear Hands to show that they can hang with these headliners as they look to take lead of alt-rock’s next generation of bands.

Spring Fling offers Bear Hands a unique opportunity to jump to the next level. As the release date for their third record You’ll Pay For This looms on the horizon, they’re being exposed to the biggest audiences of their career when they step on stage each night to open the show. It’d be intimidating for any young band and frontman Dylan Rau was very honest in that it’s no different in this instance. “This is easily the best collection of bands I’d ever been on the road with,” he exclaimed. “That and the sheer scope of the venues is very overwhelming at times. I mean, we’re playing arenas like where the Sacramento Kings play when we’re used to just playing intimate venues. It’s intimidating for sure, but also inspiring.”

It’s a pivotal moment for Bear Hands as they look to surpass the triumph of their sophomore album, 2014’s Distraction, and prove the success of “Giants” was no fluke, but it’s also a change in how Bear Hands operates. For years, Rau served as the primary songwriter and lyricist for the raucous quartet. The remaining three members contributed in their own way, but for the most part, each album and each song was Rau’s own vision he carefully cultivated. That all changes on You’ll Pay For This though as it makes the shift to collaborative songwriting between Rau and guitarist Ted Feldman, something Rau has been over the moon about.

“We really help each other now,” Rau admitted. “We write on our own, but we get together and it’s great to have someone help weed out the weaker ideas and strengthen the ones we feel have merit.” As they began work on what would become You’ll Pay For This, Rau found himself encouraging and even mentoring Feldman in his growth, though he noted that it wasn’t for long as Feldman was a “ridiculously quick study.” Still, the songs were no longer Rau’s sole vision and creation, though he clarified that he felt just as attached to these new songs as anything he wrote on his own in the past.”

“They’re still my babies,” he joked. “We really worked together on each song to the point I think there’s only one song for each of us on the record that one of us did the whole thing.” Rau credits spending so much time on each composition from inception to recording with his emotional attachment, though he clarified that his own attachment would be necessary for any song Bear Hands ever wrote. “You have to go out and sing them all each night so that connection has to be there,” he said. “Otherwise, you just come off fake and phony and that’s never going to be Bear Hands.”

Thematically, Rau and Feldman both settled on an idea of being too old, something he reasoned spilled over into all aspects of your life. “I think it all touches down on feeling like your best days are behind you,” he described. “Feeling like you’re too old to play in a rock and roll band or to fall in love or to just be an exciting human being.” Their lead single “2AM” firmly grounds these thoughts, but Rau also pointed to songs on the record like “Chin Ups” and “Too Young” that also drive this point home. “We think ‘Too Young’ will probably be the next single we release,” he revealed. “We wrote it together on tour and it’s kind of anthemic and really drives home the thought process behind a lot of the lyrics on the new record.”

With less than a month to go until release, the band’s eager for these songs to find an audience and reap the benefits of their hard work. “We didn’t spend a year of our lives for naught,” he reasoned and while it’s a blunt, almost dismissive declaration, it comes from a realization that Bear Hands’ music will never be all-encompassing and please every fan. Rau knows full well the different role music has in people’s lives and how their own music can be twisted to fit either need. “Sometimes, you listen to music and it’s your only thing going on,” he laid out. “It’s your sole focus and you find yourself really getting into the lyrics and rhythms. Other times, you’re just looking for something in the background to add texture to your daily life.” While either is fine for Bear Hands and really any band, Rau did add that he believes You’ll Pay For This deserves intensive listening before being relegated to the background.

Initial reception has been strong for the new music, but while the band is excited to find out how the rest of the world reacts, they’re also understanding of the fact that there’s never going to be any time where they can just stop and bask in the adulation. “You don’t get a lot of time to ever truly savor it,” he stated, “but in a way, every show you play is an opportunity to savor the music. I don’t feel like I’m missing anything at all. I’m right here at ground zero and it gets more exciting with every new show.”

Bear Hands bring their own unique flair to Richmond tonight as part of the Spring Fling alongside alt-rock bands Cage The Elephant, Silversun Pickups, and Foals. Tickets are still available starting at $29.50 and the doors for the event open at 6 PM with the show starting at 7 PM. For more information on the show, click here.