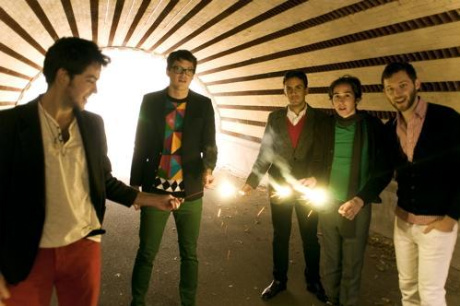 Ours Go To 11: Harlem Shakes

There’s a scene in the classic mocku-rockumentary Spinal Tap wherein Tap guitarist Nigel Tufnell is showing the documentary-maker around his impressive stash of equipment.

There’s a scene in the classic mocku-rockumentary Spinal Tap wherein Tap guitarist Nigel Tufnell is showing the documentary-maker around his impressive stash of equipment. After going through several of his dozens of guitars, Nigel heads for a Marshall amp, explaining the band’s edge over other bands. “The numbers all go to 11,” he says, to the confusion of his interviewer. When queried as to why the band didn’t just make 10 louder and have their equipment go to 10 like everyone else’s, Nigel blankly stares and replies with the incomparable line “These go to 11.”

It is this philosophy, somewhat ridiculous, but very singular, that was the rational for this interview series. That and the fact that there are 11 questions, of course.

First victim: Harlem Shakes. They stole their name from a dance move, you know. The band came through Richmond last month on their nationwide tour with blogthrobs Passion Pit, stopping into Plan 9 for a hot and sweaty instore before their set at The National. He of the delightfully off-kilter croonings, Mr. Lexy Benaim, took up the challenge of 11, and passed with flying colors. Make sure to check out Harlem Shakes’s latest LP, Technicolor Health. AND if you’re the scallywags that took their equipment, please give it back.

Megan Petty : How would you describe your music?

Lexy Benaim :I generally try not to. People can just listen to it, and see what they
think.

I can say for sure that after a month it turns the heart tired. I haven’t
checked my heart lately but I pray it isn’t cold and black, and that it just
looks like normal gore.

People have been talking about this record you made (i.e. Technicolor
Health). Does it offer artistic validation when critics heap praise on the
product of your blood, sweat, and tears? (And did you listen to Blood,
Sweat, and Tears while recording?)

Honestly, it depends on what the critic writes. But I don’t read many
reviews. In terms of personal satisfaction, it matters more to me that we
like it. I love Blood, Sweat, Tears! What a weird band.

Speaking of Technicolor Health, which song are you most proud of on the
record? It’s ok to play favorites.

And also, what color means you’re in the best “technicolor health”?
Beige?

You were at SXSW. I was at SXSW. We were all at SXSW. Other than yourselves, naturally, which band/s did you think proved to be the cream of the crop this year?

We played so much I didn’t get to see too much. I did love Titus Andronicus.

Who do you most want to drag into a dimly-lit alleyway to engage in some
good old-fashioned fisticuffs with?

What’s been your favorite show of your current tour, and how come?

Maybe Dallas. Expectations weren’t super high–“how’d they take a million
steers/ and turn ’em into buildings made of mirrors?”–but I like playing
that old Granada Theater, and the people were great.

Is winning everything? Or the only thing? Or does it really only matter
how you play the game?

Definitely how you play the game. Unless the game is basketball rather than
a metaphor for life; in this case, only winning matters.

What was the last record you bought?

Please finish the joke: a priest, a rabbi, and a voodoo priest walk into a bar…

And that bar was Union Pool, and now they all have 19 year-old partners who
study film.