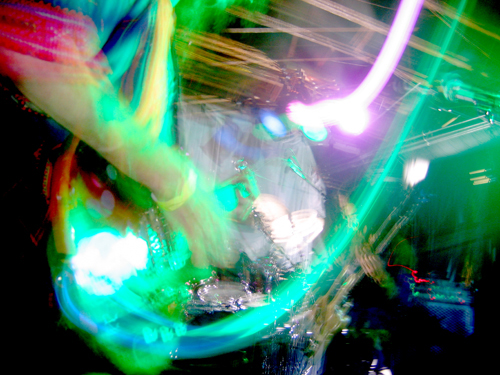 Ozric Tentacles at The Canal Club

When waiting for a band you have seen 5 times in ten years to take the stage there is time to reflect back on who you were at each of those shows. You think about college, graduating and after. Taking in the crowd with the age gaps knowing how you fit in and how you used to. When the first song finally starts it is time to stop thinking and just be thankful to get to catch the band. Ozric Tentacles played Wednesday night at the Canal Club June 24, 2009. They have been on a modest US tour this spring that has brought them to Richmond. Opening band was Highly Classified made up of pieces of several Richmond bands (Modern Groove Syndicate, Existor, and DJ Williams Projekt) who set the tone with a solid set of instrumental music with movie dialog samples that shared a sense of secrecy and conspiracy. 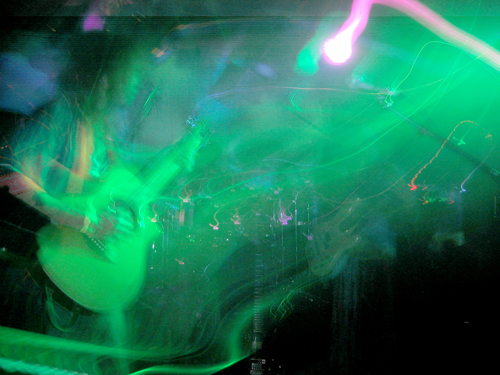 Fans of progressive rock and jam bands have gravitated to Ozric Tentacles based on recommendations, catching them at festivals, or a direct marketing suggestion when shopping online in the nebula of progressive rock. Formed in 1983 as the legend has it at Stonehenge, they have under the musical direction of Ed Wynne continued with several different lineups of musicians. The ferociousness in the fusion of musical genres is an acquired taste. When I have tried to turn people onto them I have heard “Ostrich Testicles?” “This sounds like music from Cirque du Soleil!” and it not going over well with neighbors. Those that get the vibe of Ozric and can dig songs that go from reggae to trance to rock to metal and then settle out into ambient they have a new favorite band.

As a lone DJ played a sweet Meters-funk set before transitioning into Highly Classified, the members of this Ozric touring lineup, far from their England homes, quietly had dinner in a booth off to the side. Slowly patrons arrived, first in were the diehards, myself, the promoters from EQ, the older progressive rock guard of Richmond then came the youth, a dread-locked, tie-died, dance party, spinner crowd started to form. I was thrilled that people had shown up, that the word of Ozric had reached those who appreciate them. After playing a run of classics the bassist was noticeably amazed at how thoroughly into the show the Richmond crowd was. “I didn’t know if you wanted to see our Virginia show…” and the yells of the fans confirmed that indeed many initiated Ozric fans where quite happy to be there. 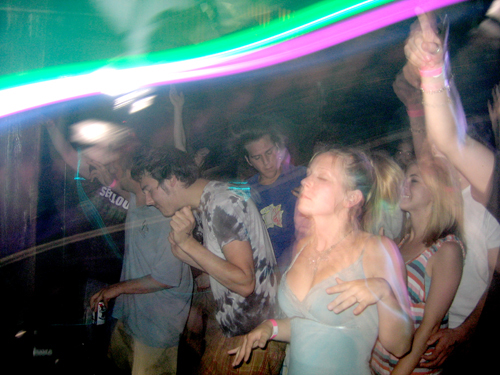 Jesse Pruitt one of the guys behind EQ Produktions shared when he first heard of the Tentacles “…back in 1996. I was obsessed. I couldn’t get enough of them. To me, their music has always been so peaceful, tranquil, and serene… at other times visceral, vicious, and other-worldly. My first CD was “Jurassic Shift” and I wore it out, Literally. I played it until it didn’t work anymore. Then I got “Strangitude” which I thought was even bette, and solidified them as one of my all-time favorite bands. This is something I understand and my own “Strangitude” CD was destroyed from over use. Out of the 25 plus albums they have made each song is new and fresh yet always the same feeling and sonic space exploration, I am excited to listen to The YumYum Tree to hear what strangeness awaits. On the opportunity to book them here Jesse said “It’s a dream come true really. I’ve always wanted to meet them and now I actually get to work with them, it makes me very happy to bring something that I cherish so deeply to RVA and to be able to share my appreciation of their music with my friends and family.” He adds “EQ was tapped to bring them to Richmond by Entourage, their booking agency. Entourage sought us out because of “our overwhelming success with the Jam/Electronica market.” Over the course of the past year we’ve managed to build a strong fan base of like-minded Virginia music lovers… carving out a niche for ourselves with such great acts as the Pnuma Trio, Eoto, Pretty Lights, Brothers Past, Future Rock, The Disco Biscuits, 2020 Soundsystem, Telepath, and Big In Japan. We’ve also supported local Richmond artists in the scene such as Existor, The Silo Effect, The Former Champions, Jason & The State, M6, and Highly Classified. 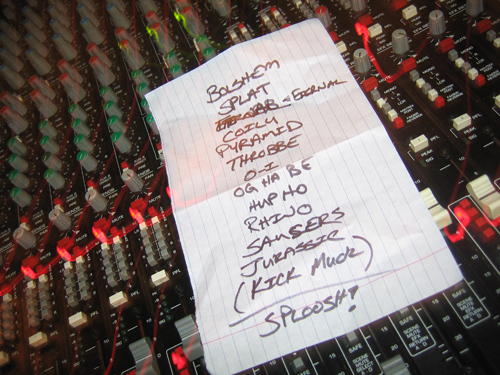 It was the sparsest lineup but most pure I have seen, Ed Wynne doing his thing with guitars (with his classic Ibanez) and keyboards, Brandi Wynne on bass and more keyboards and samplers, another keyboardist-sound man who shared a head of hair just like Ed and new drummer who held the intricate rhythms in check. Into the 14 song show the crowd yelled for Sploosh Ed said “if you have been to one of our shows you know that is the last song, do you want us to play that now? Keep saying it.” the crowd asked for more and got more until the promised encore of Sploosh. Memorable songs included Coily, Throbbe, MoonCalf (new song) and my favorite live piece Saucers. Every few songs Ed would remind us how strange the next song is or how weird the last one was. The best thing about an Ozric Tentacles show live is the way the bass bubbles out of the speakers and feels like sound waves washing through your body, I have never gotten that sensation from any other music or concert it is something I associate with Ozric’s late-night highway driving hyper space-battle blast style.

Suffering hearing loss there was a thrill of getting to photograph a band that the first time seeing them I was in Photography Courses at VCU learning how to do the long exposure photography I am fond of. The fears and regrets that may have crossed my mind while remembering who I was at the other shows passed and the thrill of hearing the band live again was fantastic.