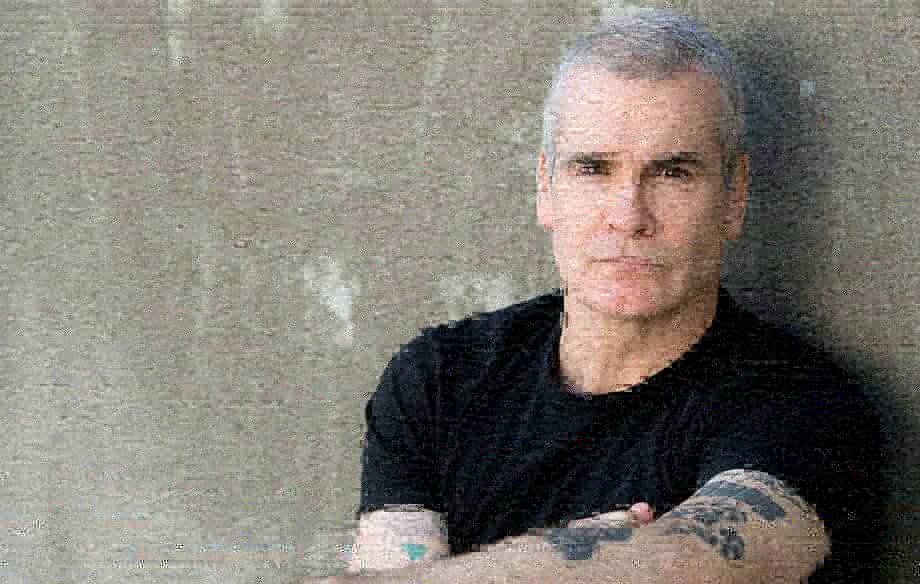 The best foil in a story is one under the perfect contrast, it’s opposite. A white bold text shows best on a black canvas. On Sunday night, on a cold bitter night, an audience waited patiently, dispersed murmur. A rather coy man walked up to the mic, calmly introduces himself and precedes to show the best title in its respect: On the screen sits a simple white text; Henry Rollins.

Rollins is a foil in himself, someone so animated with raw passion, an ecstatic persona sincerity, maned the far corner of the stage, channeled most clearly through the confines of his own meek demeanor.

The show, Henry Rollins’ Travel Slideshow, which the actor/writer/and musician brought to The National over the weekend, was a visual storybook of his time bouncing across the Middle East and much of Southeast Asia; combining photos he took, accompanied by anecdotes that continue the same fiercely intense empathy behind his enlightening performances that defined his craft.

Travel Sideshow showcased photographs Rollins shot from locations branching from the sun-soaked plains of Masaka, Uganda to a music festival in the desert, with shows catered to the camels and people in the crowd. Rollins also discussed his travels in Thailand, India, Indonesia, and North Korea, he provides insight on the interactions of amazing people whom we would otherwise never hear about.

He discussed the beauty he found in North Korea, as well as the compassion shown in Iran. The shots generally depicted people he met, places with a past, yet very few landscapes, the general zenith to photographic achievement: “I don’t like taking landscape shots,” Rollins said, “landscape shots don’t hit back, there’s no people behind it.”

Every photo has a story or insane adventure that Rollins encountered, every shot a punchline he could barely contain. The stories bounced around between funny and gut-wrenching reality that kept the seated audience on their toes.

While not especially religious or spiritual, an aura mimicked a trick on the lighting in the building, his presence permeating in an outer-body experience; a spectacle at the price of admission. “I’m not a particularly religious person, but if someone put a gun to my head and said you have to be religious or it’s curtains, I’d pick Buddhism! They have a steady ambient humor, I respect that a lot.”

Rollins stressed the importance of travel, a signature “If you don’t go, you won’t know” philosophy that is at the center of many of his other themes in the show. He’s traveled to many places seen as dangerous, being around people deemed a threat, but this is what drew him in, this the reason he went. “Everyone must travel if they can, and it’s important to go to places you would never think to look,” Rollins said. “Leave with curiosity and sincerity, but do your research.”

“It’s very difficult to travel and not bring home with you into other scenes,” Rollins said. “It took many years of travel to be in that spot and take it for what it is.”

While he even occasionally mocked the legitimacy of his own opinion, Rollins made a steady case for the importance in striving to meet others in any other country we can, to go to places we don’t understand with the utmost respect and sincerity. “I’ve almost been killed four times, like really close, very unpleasant,” Rollins said. “That was all in America. The other countries were really nice to me in comparison. America is like a Philly-Flyers game coast to coast.”

Rollins spoke without any breaks, each sentence a stanza he wanted to scream to the world, you swore he was about to pass out after every slide. This is an individual to which the sun never sets, every waking minute a reason to gain insight into the lives of others. In his mid-50s, Rollins worked the crowd with mastery and poise, with enthusiasm I can honestly say I’ve never seen more genuine in a human being. His empowering words took hold like a warm embrace. Someone who strays from the materialism around him, Rollins is enthralled by the beauty of human interaction, utilizing his inner rage to fight for every opportunity to meet someone new.

Rollins is a feral altruist: he never proposes a problem he doesn’t hold a solution to, never sparks an argument he doesn’t have an answer to. He’s someone who emphasizes empathy, he’s Johnny Quest Jr. on a mission to save the world from itself. His solution to the world, to take it’s first steps towards a Rollins’ Utopia: Let them eat metal.

The truth is, Rollins is known for many things, he is an individual characterized not by his achievements or awards inscribed with his name, he basks but by his relentless ethos and ravenous curiosity for the dynamics of the world around him. He doesn’t need his work to speak for him, no foundation to secure him in history, Henry Rollins exists to spread an infection of love and understanding in every human around him, an infection that has bugged him since his travels as a youth.

Rollins is still on tour for his Travel Slideshow, you can check out dates here if you missed him in Richmond.

Taking You With Me: Weekend Playlist by The Silent Boys

Taking You With Me: Weekend Playlist by The Silent Boys