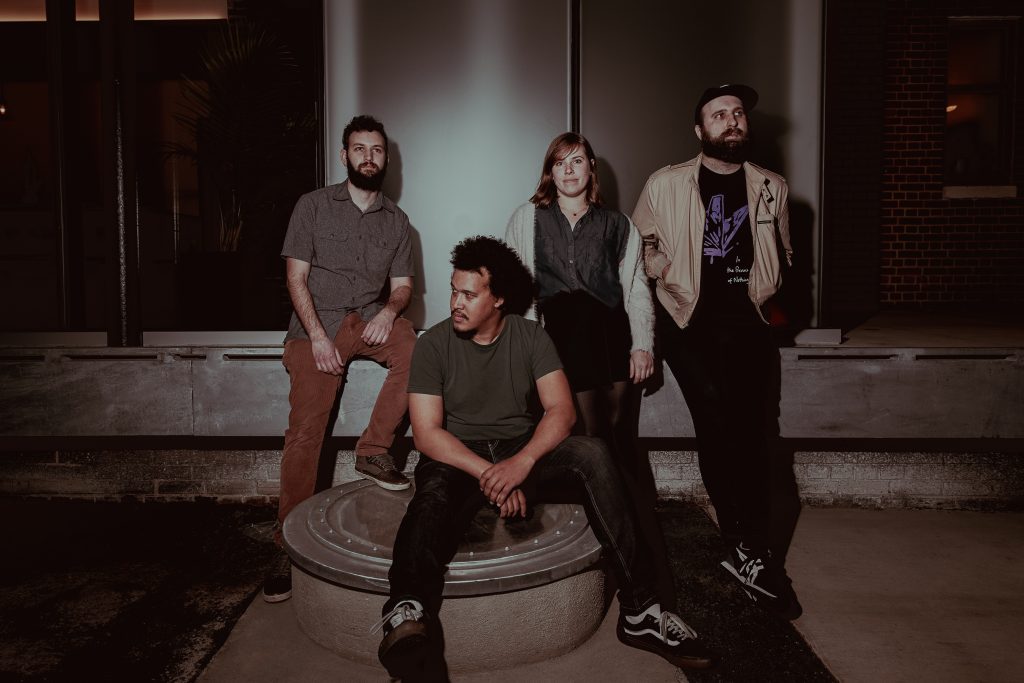 Richmond’s Opin is on track to drop their next EP Drifters later this month, and the four-piece has given us a little taste of what to expect with the funky/groovy track,”How Can I,” accompanied by some extra trippy visuals. Formed last year by ex-White Laces members Tori Hovater (vocals, keys) and Landis Wine (vocals, guitar) after they announced the end of their longtime shoegazey turned indie rock group, Opin has since recruited Night Idea’s Ethan Johnstone (drums) and Navi’s Jon Hawkins for their project, put out a self-titled LP on Egghunt Records, and plan to hit the road in the next few weeks.

The video, between its electronic groovy rhythms and spliced images of a giant swirling moth, bikers and more, makes me feel like I am dropped into an old-school video game. The vocals are upbeat yet hazy and transport me into another world as I sit here typing away at work. A world which is carefree and I’m dancing among other carefree souls in a dimly-lit room with nothing but pops of bright colors shining through here and there to light us up as we dance the night away. We can thank director Chris Foster-Baril for his seriously weird and hypnotic work on this video.

“He’s a really excellent graphic designer and does a lot of visual experiments with his artwork,” Wine said. “He’s gotten into more video art and we wanted something interesting to go with that track and he hunkered down and did a lot of rendering and came up with something really cool for us.”

Drifters, Opin’s second release, is slated to drop on Fri., April 20, via Harding Street Assembly Lab, a Lynchburg-based studio who Wine worked with on past projects when he was in White Laces.

“They suggested doing a limited-edition, clear one-sided 12-inch, which I’m a big fan of old dance remix 12 inches and that sort of thing so I jumped at the chance,” Wine said.

The band recorded the six-track (two bonus tracks) EP this past summer in Philadelphia with Jeff Zeigler, who they worked with their on their debut record, and who Wine and Hovater worked with on several of White Laces’ albums.

“Jeff’s a great dude and we had a few songs that were outside of stuff that was on the record that came out last year that we were playing live,” he said. “We basically went in with what we had and did most of it live in the room.”

Wine said the band wrote most of it while Johnstone was gone on tour with Night Idea, and wrapped up finishing touches on the EP in August after having it mastered by Heba Kadry.

To add to the unique sound for “How Can I”, Opin recruited the lead singer of Doll Baby Julie Storey for her lovely backup vocals.

“I’ve known Julie for a really long time since I was at VCU, and she was doing acoustic stuff primarily and it was really cool to get her to hop on a track,” Wine said.

The band plans to hit the road later this month for an East Coast tour with Doll Baby {dates below}, a band that Wine said is one of his favorites and really vibes well with the band.

“I love their songs, I love seeing them live, they’re good people and a great band,” he said.

Judging from the other tracks RVA Mag had the pleasure to have a sneak peek into, fans are in for one hell of a treat this spring when Drifters drops. Get your dancin’ shoes ready. You can pre-order Drifters here, and until then, make sure to catch Opin tomorrow, Apri 4, at Sound of Music Studios with Shormey, Chesapeake’s Shormey, Atlanta/Philly’s Pamela_ and her sons, and fellow Richmond band, WaBeya. Doors: 8 PM and Music at 9 PM. $5 cover.