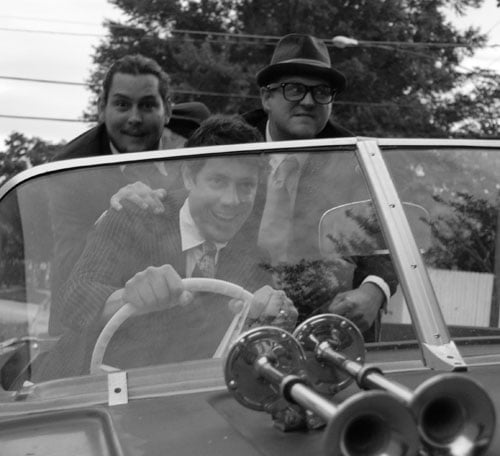 Microjoy has the best qualities of a fun party band – borderline alcoholism, good-natured jams and an unbelievably wide range of musical influences to make sure all the people in the crowd are touched with the fever. The guys took some time to talk to me about a number of things, some of which are ridiculous. Enjoy.

Microjoy has the best qualities of a fun party band – borderline alcoholism, good-natured jams and an unbelievably wide range of musical influences to make sure all the people in the crowd are touched with the fever. The guys took some time to talk to me about a number of things, some of which are ridiculous. Enjoy.

Tony Harris: You guys sound like a boat full of drunken Vikings making all kinds of music. I hear rock, reggae, hip-hop, even some country in your songs. If someone was to interview you and asked you to describe your sound, what would you say?

Adam: I’d describe our sound as delicate and agro, happy and angsty, bratty and raw, punky and funky, eclectic and electric music.

Bradley: I’d say our sound is a little bit of everything we’re in to. We know no boundaries. We like to make music that makes you want to have fun.

Is there a genre that you guys haven’t done that will get done in the future?

Craig: Maybe salsa, show tunes or more opera. I’ve never just listened to one genre of music; I just like good music. I’ve had my favorites, but hardcore and hip-hop have always spoken to me the most. Basically it’s more fun to write any kind of music I want. I’ve kind of studied all genres of music, but there’s definitely more to learn.

Bradley: I’m sure there is, and I’m sure we will. Nothing’s off limits.

You reference Richmond a lot in your music. What is it about this town that matters?

Adam: We live in Richmond and we’re a Richmond band that likes Richmond. It’s good to represent.

Craig: We’ve all pretty much grown up here. I’ve just always writing whatever comes to mind. I love this city. I’ve lived other places, and I spent some of my childhood growing up in the Philippines, I’ve been all over the world and still love living here. So many good bands and artists are here. Every town has its snobs; you gotta look past that.

Bradley: This is our home; it’s where we grew up. We’ve seen the best of times and the worst of times here.

Your lyrics are funny, beer induced and weed infused. I wanted to ask you – are you guys insane?

Craig: I feel like we’re very misunderstood. We’re also in a town that’s really in to heavy metal right now. Once they here anything about hip-hop in the mix, they don’t even give us a chance. I’ve just always liked rhyming. Beastie Boys influenced me a lot the way they just rapped the way they are. I don’t try to sound black, and I don’t try to sound like a Rasta man when I make a reggae song. I just try to write fun songs and always be myself. Our hardcore and metal songs destroy anything else, but we also want songs for the girls to dance to. That’s what separates us from most bands. Insane is rather harsh. Maybe weird or creative would fit better.

Adam: No, not really… unless it’s crazy to shoot for the stars each and every day!

You guys sound very comfortable playing music together. How did the band happen?

Craig: I formed this band about 10 years ago in my head; it’s my dream band. I’ve been playing acoustic with Bradley for a long time. Adam was in my favorite hardcore band growing up called New Clear Vision. We’ve all been friends for a while. Adam went to Cali for a masters in sculpture. When he came back we started jamming and Brad was in to it. It was perfect; our songs come together so easily.

Bradley: Craig and I have been good friends for quite some time now, and I wasn’t playing with anyone else. Adam had just come back to town and we began playing. Craig writes like 17 songs a day, so we had plenty of material to work on.

Adam: Three musicians crossed paths on a balmy summer evening. They had known each other for many years, but on this night they met to make joyful sounds. That night, a new chapter in the history of music began. Now I would say we are about four to five chapters into Part One of the book of Microjoy. I’m not sure how many chapters will be written, but I can tell you that it will probably be a whole bunch of chapters. So far it’s been over 3 years in the making.

If I was a bagel with cream cheese and… uh… nevermind… next question. If I was a werewolf could we still party?

Craig: If you’re nice. We wrote the song “Hanging out with Werewolves” for an upcoming 7” split with the Baltimore hardcore band, Werewolves. They rule and we went to Best FrIends Day last year together.

Adam: Oh sure, we LIKE to party with werewolves, so no problem at all!

Thanks for rolling with me on that last one. When is the new album coming out, and where can I buy a copy?

Bradley: Well speaking of werewolves, Tony, we have a split 7″ coming out with Werewolves from Baltimore, who shred, sometime soon. Please buy a copy.

Craig: We have two full-lengths available at Plan 9. Currently we are working on the songs for our new one. With our last two albums we recorded them whenever we could and with a few different producers. For this album we’ve written all the songs, and we’re gonna record them all at once with one producer. It’s fun to keep doing things differently; it keeps things fresh.

Bradley: Botox Party, The Hotdamns, Brainworms, I like them a lot… good bass player. I’m all about some Municipal Waste. And who doesn’t love some Avail?

For more information check out myspace.com/microjoy