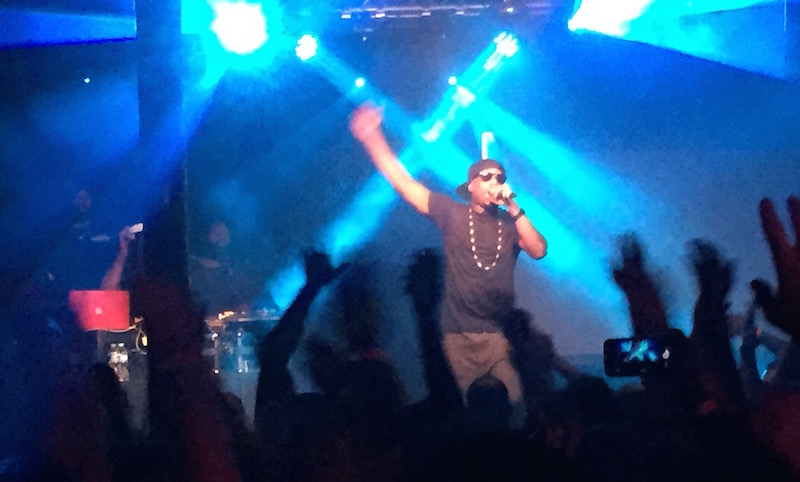 Talib Kweli brought the best of old and new hip-hop, and progressive politics, to the Broadberry Stage

His name is “in the middle of equality.”

His name is “in the middle of equality.”

One half of the acclaimed hip-hop duo Black Star, Talib Kweli and his tour-mates preached a message of progressive activism and positivity to a sold out crowd at the Broadberry last night.

One of those fresh faces was Chicago-based rapper K’Valentine, who made a statement in her song “Chiraq” about the culture of violence that has developed in her home town.

“Glorifying-ass bitches…basically you’re telling me death could come from an argument…killin,” she said midway through her set. “Little kids ain’t a part of this: hit your muthafucking target bitch”

Needless to say, Valentine’s flow was sick… but so was the Brazilian born and Orlando raised Niko Is, who brought a blend of humor, hippy mysticism and deep-cut hip hop references (a la Das Racist?), including a recurring nod to Clipse’s: “I’m from VA where there ain’t shit to do but cook.”

Niko Is opening for Talib Kweli at the Broadberry last night.

And of course, Talib put on for the packed Richmond crowd, performing songs from the new self-released mixtape, Fuck the Money, all the way back to Black Star. He even giving props to the dude in the front row wearing the “Eric B. For President 2016” t-shirt.

Black Star made an appearance

In keeping with his progressive politics, Kweli spent a minute late in the evening addressing the #BlackLivesMatter movement, addressing the current political environment, the “non-candidate” Donald Trump, and the importance of “knowledge and self determination” in the growth and development of “all oppressed people.”

From here, the crew moves on to tour for the next couple of weeks in Southeast Asia.

Here’s to a great show, and wishing them back soon.

Talib sharing the stage with the Brazilian.