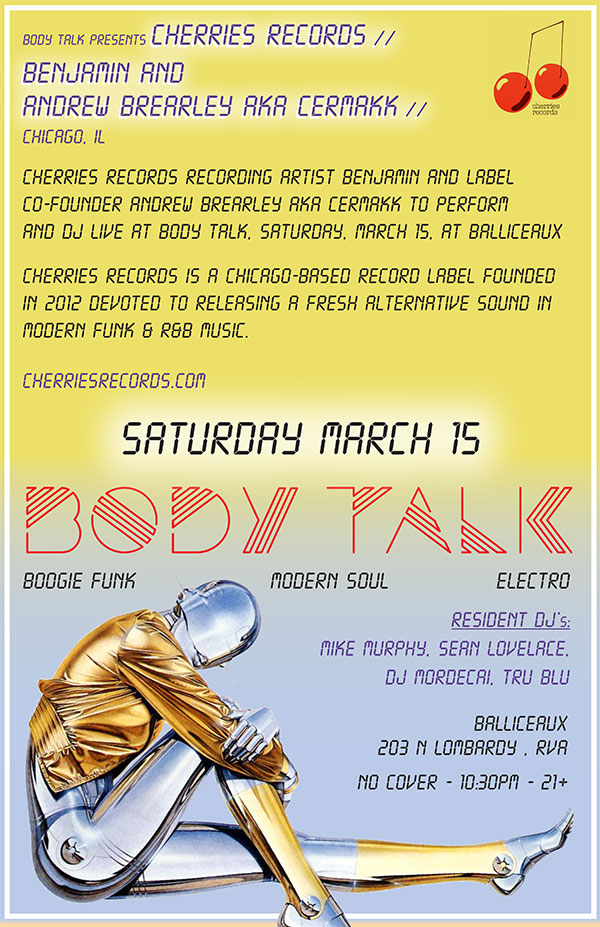 Andrew Brearley, AKA Cermakk, and recording artist Benjamin will be playing at Balliceaux’s Body Talk on Saturday, March 15 at 10:30pm.

Andrew Brearley, AKA Cermakk, and recording artist Benjamin will be playing at Balliceaux’s Body Talk on Saturday, March 15 at 10:30pm. Along with his wife, Brearley is the cofounder of Cherries Records, a Chicago based record label founded in 2012 devoted to releasing a fresh alternative sound in modern funk & r&b music.

Richmond has proved to be a successful stop for Cherries before, and they hope this trip will be even better. Brearley is really looking forward to visiting Richmond this time in particular; it’s his first trip to RVA that will last longer than a day. “I want to go record shopping,” he says, “I know there are a lot of good record stores in Richmond. I’m excited to just walk around.”

Brearley has been DJing since 1998, and he has been collecting records for even longer. Currently he works with his wife in New York selling records for a living. Even the name of his label, “Cherries Records,” has its origins in a record store: “I used to work for this funny older guy,” says Brearley, “And when ever we’d get records that were in mint condition, he’d be like, ‘it’s so cherry!’ and it came up somehow when we were talking about starting a label.” The name stuck.

As for the Body Talk show, you can expect some unreleased Cherries material as well as some of their existing records. “I’m coming with Benjamin—he’s a vocalist and he plays guitar and keys and everything,” says Brearley, “And I’ll be bringing the tape we just released the other day, unreleased stuff, merchandise, and all of our forty-fives.”

Back in Chicago, he played every week, but Brearley hasn’t played as many shows as he’d like since he moved to New York. He’s looking forward to DJing in Richmond this Saturday. “I’m excited to play some new records. I’m always finding new stuff,” he says, “I play a lot of rare and hard-to-find stuff, and some classics, too.”

Body Talk will also have some resident DJ’s, including Mike Murphy, Sean Lovelace, DJ Mordecai, and Tru Blu. The show will have a little bit of boogie funk, modern soul, and electro. Body Talk will be at Balliceaux, 203 N Lombardy, and welcomes everyone 21 and up.