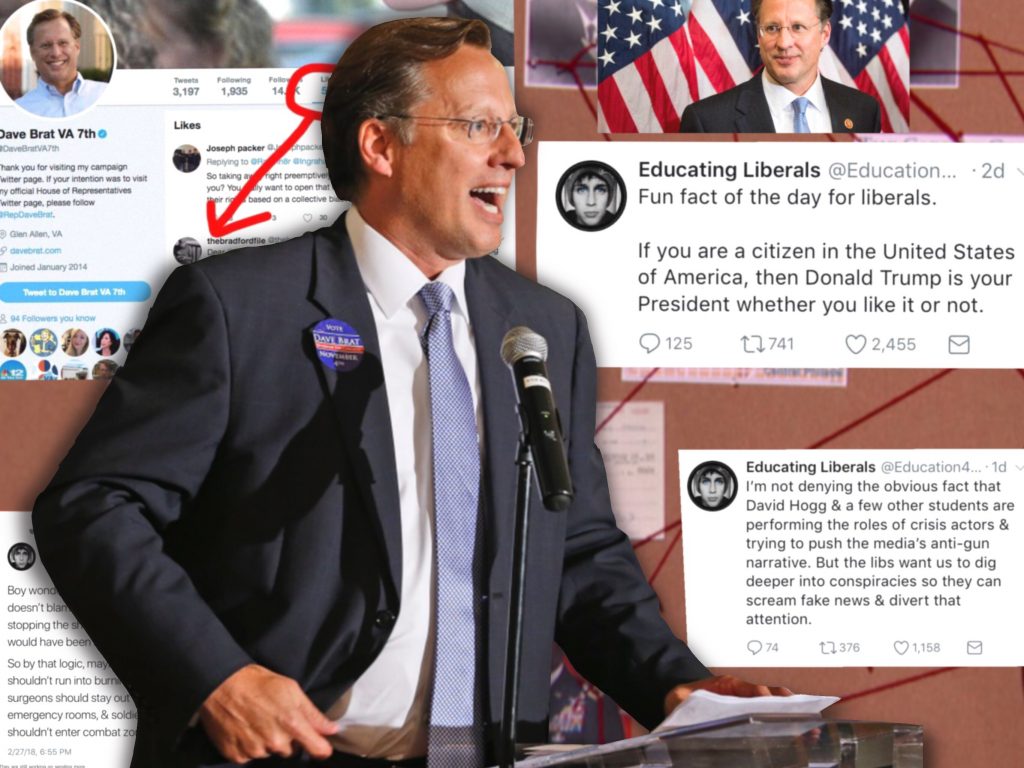 This is a developing story.

As local students in his district prepare for a national walkout in support of gun control, a Twitter account belonging to Congressman Dave Brat’s (R) campaign was liking tweets from conspiracy theorist websites implying Parkland survivor David Hogg is a paid “crisis actor.”

One of those tweets was from The Bradford Files, a site which primarily shares right-wing memes and conspiracy theories. The tweet was originally sent to CNN, asking the outlet to question the teenage Hogg if he is receiving money for speaking about the mass casualty shooting on Valentine’s Day.

The idea that the survivors of school shootings are paid to distort or invent stories is a common one in far-right circles, disseminated throughout social media by fake accounts associated with foreign spy agencies and through alternative media like Alex Jones’ Infowars.

One of the other tweets Brat’s account endorsed was by a Twitter user who goes by the screenname Educating Liberals (@Education4Liberals). The specific tweet was one making fun of Hogg. We emailed and called the Washington office of Brat to ask what his position was regarding students who speak out, and if he believes that any are paid “crisis actors” and were told a statement would be issued by early afternoon.

The Educating Liberals account had previously shared a tweet calling Hogg a “crisis actor”, and the user reported that YouTube had deleted videos he made criticizing the high school student. It’s a common theme throughout his tweets.

When RVA Mag called the Washington, D.C. office for comment, multiple individuals refused to use their last names or identify themselves, eventually being transferred to someone described as “Mark, our chief of staff” – who also refused to give his last name and said that all questions should be referred to Juliana Heerschap.

Outside of Heerschap, no one speaking would give their last name, not even simply for a log of who RVA Mag spoke to for future follow-up. A follow-up call with a front desk person confirmed that the chief of staff is Mark Kelly.

Via email and over the phone, Heerschap said a formal statement would be forthcoming “in 30 minutes or so,” that would answer all of our questions. Some of RVA Mag’s questions included Brat’s view of the role of young people, if he believes Hogg is a paid “crisis actor”, and if he stands by claims he made last year in a Richmond Times-Dispatch article that women who protested him were paid activists for the far left.

The formal statement avoided answering any of those questions and is printed in full below:

“It has come to our attention that a campaign staffer who helps with posting in the @DaveBratVA7th twitter account mistakenly liked tweets on this account when they believed they were logged into their personal account. This was against our policy of Dave approving twitter content. Dave did not approve the “liking” of these tweets nor would he approved of liking the question about Mr. Hogg. As has consistently been his position, neither Dave nor his staff, support any alt-right views or individuals. The staffer’s personal tweet likes have been removed, and the campaign is putting safeguards in place to ensure that it will not happen again.”

RVA Mag asked in a follow-up if the office can answer the other questions and if they’ll confirm who the staffer was, what their official job was, if they are being retained for the campaign, in addition to what the other 53 liked tweets were.

Sometime between our initial call and email, sent at 11:59, the campaign Twitter account had purged 55 likes, including the two RVA Mag inquired about.

This story will be updated as more information comes in.