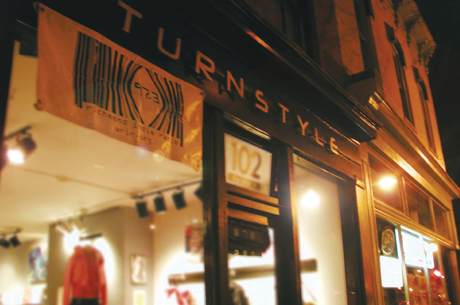 This year, RVA Magazine will be celebrating our 10 Year Anniversary–and in honor of our first decade of publication, we’ll be taking a look back and some of our favorite articles we’ve run over the past 10 years. Today, we go back in time to our interview with Jesse Oremland and JoAnna Oremland of Turnstyle from RVA Vol. 1 Issue 4 back in 2005.

This year, RVA Magazine will be celebrating our 10 Year Anniversary–and in honor of our first decade of publication, we’ll be taking a look back and some of our favorite articles we’ve run over the past 10 years. Today, we go back in time to our interview with Jesse Oremland and JoAnna Oremland of Turnstyle from RVA Vol. 1 Issue 4 back in 2005. Ten years ago, they started a record store business and cultivated a community on Broad Street when not many people were brave enough to try. About the same time, First Fridays RVA began to revitalize that strip of storefronts and galleries to what you see today and Turnstyle is still there. Go by and say hi. Enjoy!

The good people at Turnstyle recently spent some time with RVA’s own Donny George to talk about Richmond, the electronic music scene and trying to bring the two togetther.

DG: What made you decide to want to open a vinyl boutique specializing in electronic dance music in Richmond?
JO: It was too difficult to get the music and fashion that I was looking for in Richmond and found that others felt the same way. So I felt I could bring my years of experience and world travels to the table and offer Richmond something new.
JW: We both wanted to open a record store well before we moved to Richmond. So in 2003, the timing was right and Richmond got lucky.

DG: What difficulties did you have when you started that you were able to overcome?
JO: Overcoming incorrect perceptions of what Electronic Music is, as well as the negative image that the media has painted over the years. It is a constant struggle, as with any scene.
JW: Ridding the city of the tired 1999 mentality that “Nothing goes on in Richmond”. 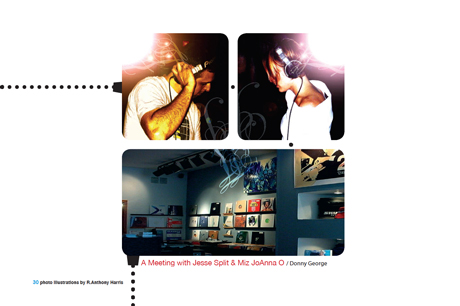 DG: What have been your biggest successes so far?
JO: I look at anything that moves Electronic Music in a positive direction as a success. The EVOLVE festival, Turnstyle, WRIR, THERAPY Anniversary Event when we blocked off Broad Street during First Friday’s Artwalk in June of 2004.
JW: Jesse pretty much summed it up. The future continues to look bright for Richmond as a techno city. The addition of good techno on the FM airwaves gives our music a voice like this city has never seen before.

DG: How do you divide up the responsibilities for running things or do you both just do everything together?
JO: We definitely try to split up work according to each others strengths and help the other in areas that may be weaker. We just have a good sense of what the overall goal is, and we each work towards that goal. Sometimes responsibilities overlap.
JW: We both have specific expertise in different areas that balance well when put together. We are always together anyway, so eventually everything gets done in the 60+ hours we work per week.

DG: Why did you choose that location?
JO: Its downtown, and I love living and working in a downtown urban environment. Downtown
Broad street is on the rise.
JW: We never thought of any other location. Downtown is where the action is at.

DG: What kind of contribution do you hope to make to the Richmond community?
JO: I just hope I can bring a positive influence to a city that needs more positive influences.
JW: To continue bringing quality techno music & urban fashion to Richmond.

DG: Briefly describe your night, ‘Therapy’.
JO: A downtown clubbing experience that highlights turntablists, live performances,
and just the best that Electronic Music has to offer in a one of a kind venue.
JW: Good vibes, superb music, fine people, strong drinks, booming sound, wooden dance floors, and we party till 4am. Sounds like therapy to me.

DG: How did you come up with the name “therapy”?
JO: This night is for those that are tired of the same old crap, you can come get your end of work week therapy. Let loose and blow off steam after a long week. Because we could all use a little therapy. Music is very therapeutic.
JW: Agreed. And, It is quite humorous to hear your friends tell others that they have to be at
“Therapy” on Friday night.

DG: Can you tell us about the venue?
JO: Mr. Bojangles Entertainment Complex is a 3 floor, 14,000 sqft nightclub with the most unique layout of any club I have seen. The second floor has an outdoor patio that overlooks Festival Park with a backdrop of the Richmond Coliseum. The 3rd Floor opens up to the 6th Street Green House and has floor to ceiling windows that overlook the Richmond Coliseum. It really is something that has to be seen to be believed.
JW: I can honestly say it is by far one of the most incredible venues I have seen. You can take the elevator (or stairs for the super healthy) up to the 2nd or third levels. Grab a drink at one of the four bars, relax on the patio while takin’ a break from dancin’ on the nice wooden dance floors. As a DJ, the sound is the best I have ever played on in Richmond. The top level is my favorite though, it almost reminds me of an amusement park for adults.

DG: How long have you been djs and how did you get started?
JO: 10 Years, I got started by buying tracks on vinyl because they weren’t available in another format. If I wanted to hear my favorite song, I had to play the record. The next logical step was to learn how to mix the tracks together, so I bought a pair of decks. But even as a little kid I was always trying to adjust EQs and knobs in order to get a different sound out of stereo equipment.
JW: 7 years. I could always be found on the dance floor prior to djing. At the time, most of my friends were djs, so that is just how we hung out. There was seriously one summer where the music never stopped because someone was always spinning. I never had the intention of becoming a DJ, I was just looking for another creative outlet & it seemed to come natural to me after years of playing the piano at an early age. I promise I will still be spinning records when I’m eighty.

DG: How would youdescribe your style and approach as a dj?
JO: I adjust my style andapproach depending onthe audience I’m playingto, the equipment I’m playing on, and the vibe that I get from the audience. If you don’t have good equipment(sound system, mixer, turntables, needles…I could go on) it really limits the overall potential and it becomes more difficult to perform the way you like. The DJ’s job is always to move the crowd, which is a lot more than just playing a song that everyone knows.
JW: It depends on whether we are playing together as Turnstyle Soundsystem or individually. But
in either case, The ADHD I was never diagnosed with as a child seems to come out when I get behind the decks. Lots of cross fader action & EQ Tweakin combined with slammin beats.
I enjoy making people sweat to my beats.

DG: Is performing as a duo different from performing solo?
JO: Sure, its just like any other musical performance, when you’re solo you really have to bring it from yourself, as when working with another musician, you can vibe of each other.
JW: I enjoy performing both ways. When we play out together it is generally a house / breaks / techno session. When playing solo, I am usually booked to play breaks or dnb. Sometimes being a female DJ tends to overshadow us as a duo, focusing more on the novelty of me being a girl than on the sound of our music.

DG: Do you ever get nervous before performing? How do you deal with it?
JO: Sure, whenever I perform to a crowd there is the anxiety of the unknown. I just try to have confidence in myself and my abilities, and remember that everyone is there to have a good time.
JW: Most definately, if I didn’t there would be something terribly wrong. It is more like a nervous, excitement though. I generally count to ten and take deep breaths, after that it’s on!