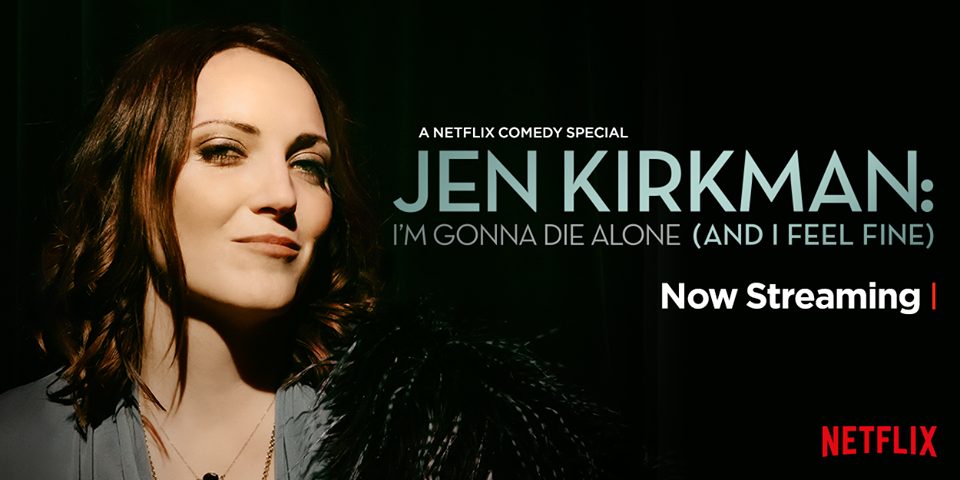 Jen Kirkman Is going to die alone and she remains unbothered.

Then again if David Hasselhoff was the star of your Christmas cards one year, you’d probably be pretty content as well.

Jen Kirkman Is going to die alone and she remains unbothered.

Then again if David Hasselhoff was the star of your Christmas cards one year, you’d probably be pretty content as well.

Kirkman is the proud owner of a new Netflix stand-up special I’m Gonna Die Alone (And I Feel Fine), and it is a snarky and joyous exploration into her new venture divorcee.

A life that definitely has its perks.

However, Life wasn’t always so easy for a woman in the rough and tumble comedy boy’s club.

Just kidding – don’t say stuff like, that it makes all of the strong, funny women into victims, and Kirkman isn’t into it.

“I think we should just be treated the same and I just feel like unless someone wants to have a Diane Sawyer, Caitlyn Jenner sit down with me, and I can explain all the nuances of being a woman in this field, then what’s the point, and there aren’t any except that we get hit on and harassed, everything else is the same.”

Not that Kirkman isn’t a feminist, she is an open advocate for a woman’s right to not be harassed. In fact she has had many open arguments on twitter with people who still seem to think that sexism is a cute form of expression. She’s just sick of having dudes make their entire articles about one offhanded and out of context comment.

“I like talking about it with women, but when dudes call me and try to talk about it, It’s like I know you guys are trying to be part of the cause but you guys don’t know how to talk about it yet – it’s new to them.” Said Kirkman “Im assuming someone doesn’t want to talk about race with someone who doesn’t know where they are coming from it doesn’t feel safe really.”

So unless D. Sawyer comes-a-calling, Kirkman would prefer to talk about regular old comedy.

It’s no secret that she got her big break writing for and being a part of Chelsea Lately. A job she said she wasn’t originally too keen on. Prior to working on Chelsea Lately she was an admitted pop culture snob. However things were very different than she imagined.

“It turned out I was good at it and it turns out people that work on a pop culture tv show, nobody really cares about the subject matter. I thought I was gonna be in a room full of people that were gonna be like ‘oh my god lets gossip about this and that’ but it’s not. I think pop culture has changed since her show, now it is ok to talk about it doesn’t mean youre stupid,” Kirkman said. “You can look at a quick tweet and go ‘oh Justin Bieber did this’ and also know about the Ukraine – everything is getting equal attention now.”

Even though she Didn’t think working on a pop culture show was for her, Kirkman said she was always very good at making fun of people.

Her first brush with comedy involved cigarettes and some state-of-the-art technology.

“At night my friend Jackie, she had a video camera, which was a big deal back then in 1992 or 3 to own a video camera it was like ‘wow.’ We used to sit on the front steps of our dorm and I would be smoking cigarettes and she would put the camera on me and I would do these rants. and it would make her laugh so much. So she would always tell me I was funny but It was so specific to making Jackie laugh I never thought, ‘oh I’m so funny.’”

Perhaps Kirkman was ahead of her time on the whole youtube star craze. Either way, it was this experience that propelled her to join an improv group and eventually pursue comedy as a full time career.

While she said that being a performer has always been her goal, her time writing for Chelsea Lately was invaluable to her, and she met a lot of celebrities during her time there. She met her hero, the late, great Joan Rivers, and got to pal around with “David Fucking Hasselhoff.”

Of course not all her celebrity interactions were positive.

“I had an awkward interaction with Reese Witherspoon on the set of After Lately. The cameras weren’t rolling and she was looking at an… I think it was an US weekly magazine and it was pictures of celebrities going out on Halloween with their kids. She pointed at one of the pictures and said ‘I don’t like that costume, I hope thats not a trend.’ Out of nowhere I just go, ‘it’s not as bad as the black face thing, parents are taking their kids out in black face.’ she goes ‘they are??’ I said ‘no I’m just kidding.’”

“She just looked at me like I was a monster, she was like ‘ok’ and didn’t talk to me for the rest of the day. Thats one of those things where I’m like oh right actors are a little more sheltered than comedians who just say awful things all day long.”

But Kirkman doesn’t fault Witherspoon. “I was shut down by her… and she definitely thinks I’m a weirdo.”

When Kirkman isn’t freaking out Hollywood stars, she is touring around the country. Check out her website for tour dates and ticket information and watch I’m Gonna Die Alone (And I feel Fine) on Netflix.