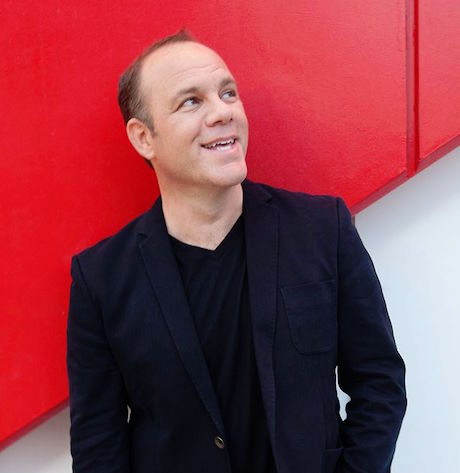 “Life is a pair of skinny jeans, and you are a big fat ass.”

“Life is a pair of skinny jeans, and you are a big fat ass.”

A pretty accurate philosophy on life I must say, I wish I would’ve thought of it. But sadly, that wasn’t me – that came from longtime actor/comedian Tom Papa in his standup special “Live in New York City”, which aired on Comedy Central back in 2012.

Papa, who started his career in NYC in 1993, has done everything from standup, to movies, to animated films, to sitcoms, to even hosting a reality show. Now, he’s in charge of the chaos over at Fox with their game show “Boom!”, hosts a regular radio show on Sirius called “Come to Papa”, and will be coming to Richmond this Friday to make us laugh.

It’s a wonder this man has managed to get any sleep in the last 20 years.

“Literally if I can get like two days in a row where I’m home not doing anything it’s very unusual,” Papa said in a recent phone interview. “But then you’re there and the kids are waking up and needing rides to school so I don’t sleep there either.”

Papa’s delivery on stage is very character-like, vibrant and captivating. But you wouldn’t suspect that energy and stories like that time he “snuck away from his wife at a musical to smoke a joint in a theatre bathroom” to come out of the mouth of a middle-aged guy wearing a suit.

Papa said it’s been stories like this (and the skinny jeans bit) that resonate with his audience.

“It’s funny when you have this one little thought in your head and so many people connect with it,” he said. “The act of constantly writing, constantly updating it still makes it fresh and makes you excited about what you want to talk about.”

But you won’t find much material on marijuana or other drugs in his standup these days.

He’s the father of two girls and he’s got some advice for them.

“I’m trying to prepare them for how awful men are,” he said. “I’m trying to teach them right now there’s no such thing as a great guy.”

His comedy deals heavily with marriage and kids, which Papa said is exactly what people can expect in his upcoming show.

“Family life is a big part of what I’m going through,” Papa said. “Where we’re shopping, where we travel, trips to Disney, the big widening gap of super rich people compared to regular people…”

Fox announced that Papa would host the game show “Boom!” last spring and let me tell you, I’m not a game show person, but when you see a sweat-drenched family attempting to cut the right wire on a guacamole-filled bomb by guessing the right answers to trivia questions in hopes of winning big money, you tend not to flip the channel.

Papa said he was more than happy to steer that crazy train.

“I always liked those summer game shows where you can sit with your whole family and watch them, we used to watch wipeout,” he said. “Being able to host one is perfect.”

Papa said he wasn’t worried about stepping into the role of a game show host now that it’s become a little more common for comedians.

“It’s really changed from how game shows used to be, you never had comedians doing it, but now it’s Steve Harvey, and Drew Carey, and Howie Mandel, the list goes on and on,” he said. “It’s not going to be a corny show it’s actually going to be a lot funnier, a little edgier.”

And contestants aren’t just getting splattered with slime either.

“We’ve had guacamole bombs, we’ve had mashed potato bombs,” Papa said. “They also take great pleasure if they can hit me with it… yeah the guys that are making these bombs…they’re not really very nice people,” he joked.

Papa said he went through 20 suits in the making of the show. We both agreed that the producers should just send him out in sweatpants, but hey, where’s the fun in that?

“It’s always funny when you have a guy in a suit running for his life,” he said.

His radio show “Come to Papa” on Sirius has had every comedian from Mel Brooks to Jerry Seinfeld to Carl Reiner to Jim Gaffigan, and Papa can’t get enough. (If only we all had that job.)

“I’m friends with a lot of these people, but you never really get to have these conversations unless you’re interviewing them,” he said. “It’s cool for the audience, but I really enjoy it because I get to connect with all these people who after the show become friends.”

Papa and Seinfeld go back 10 years. He said Seinfeld picked him out of a club in New York and has been a really great mentor.

“It’s weird it’s kind of like a combo of the most professional adult and the silliest kid in the back of the classroom,” Papa said when asked about Seinfeld.

I suggested the two of them do a Comedians in Cars Getting Coffee episode.

“I know it’s funny – we do it all the time in our regular life. We haven’t done it on the show yet,” he said.

“As a kid he {Martin} was so silly to me and knock out funny,” Papa said. “George Carlin always seemed to be going a little deeper, always so prolific in talking about so many different subjects.”

Famous comedians aren’t the only people Papa pals around with. Rob Zombie directed his comedy special “Tom Papa: Freaked Out” in 2013. Now for those that have heard of Rob Zombie, the two might seem like an unlikely pair, but they have more in common than you think.

“We ended up at a mutual friend’s wedding where we didn’t know anybody we started hanging out and making fun of all the people at the wedding… we just kind of hit it off,” he said. “He saw my comedy and I knew his music, we started working on this animated movie together and we just been friends ever since.”

Papa said Zombie is a huge comedy fan, and when it came time to make his special a few years ago, he said he wanted it to be more like a film: enter the mind of Rob Zombie.

“He’s super creative, he has a great eye,” he said.

He’s had success in all forms of media and Papa said he’s enjoyed it all, but said his true love will always be standup.

Papa plans to shoot his next standup special at the end of year, which will be produced by Steven Soderbergh, along with another season of “Boom!” and perhaps another TV project.

Tom Papa will bring the laughs to The Modlin Center for Arts at the University of Richmond Friday, October 16. Tickets are $32 for adults and $10 for UR stuents. Get yours here.