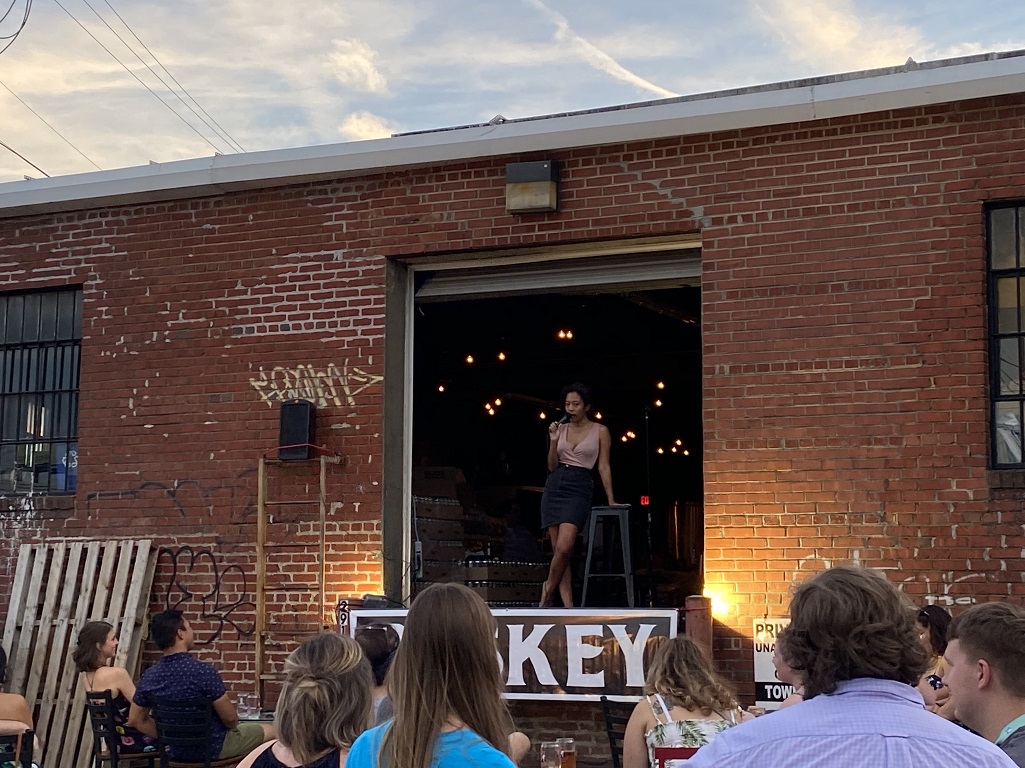 The COVID-19 pandemic has negatively impacted countless industries. People have had to adapt drastically to the new normal that we now live in, and that definitely includes the comedy scene.

Open mics have been prevalent in Richmond, and many comedians have cited the unique energy and receptiveness of Richmond audiences. But ever since the COVID-19 pandemic hit in March, open mics have become a bit of a rarity.

Winston Hodges has been doing stand-up comedy for five years, and has certainly seen the difference.

“I would say before COVID, you could get up [on stage] in Richmond… if you never wanted to leave Richmond proper, you could perform three to five times a week,” Hodges said. But since COVID-19, Hodges says the shows have dwindled. “In the city, I think you can get up once a week.”

Hodges says that while he misses the open mics, he’s taken the opportunity to create his own standup special, Grieving Productively, in which he does about a half an hour worth of material on the topic of his father passing. Over the course of the pandemic, Hodges wrote, recorded, and edited the comedy special, which premiered on Friday, October 16 on YouTube.

Many comics have gone through different avenues working on projects as well. One such comic, Francesca Lyn, is even hosting her own open mics virtually. Her open mic show, “Caged and Enraged,” is hosted via zoom on the first and third Thursday every month. “I call it ‘Caged and Enraged’ because I’m trapped here,” Lyn said. “I’m here in my house all day and everything else is going on around me.”

Other comics like Sarah Ahmed had hosted comedy shows in the past, but once the COVID-19 pandemic hit, they had to make some major adjustments. Ahmed used to host “Beans, Bits, and Brews” at Crossroads Café, but since February the event has become nonexistent. “To think that that was such an ingrained part of my life and my routine…” Ahmed said. “…and now it being that thing, like, ‘What was that life?’”

Ahmed said that she did enjoy some time to relax and not have to worry about the show, but inevitably has plans to potentially start a virtual “Beans, Bits, and Brews” as early as November. “The show has a solid reputation,” she said. “So even that encourages me to do a digital version of the show.”

All three comedians have been participating in virtual open mics. All reported that the atmosphere was supportive. Hodges chalks that up to the kind of people that are participating in these virtual shows. “I think it has to do with the fact that a lot of the comics who are at my level or higher have felt like they’re either too good to do online shows, or they’ve been like, ‘I’ve been doing comedy long enough, I don’t have to do this stupid shit,’” Hodges said.

Because of this, Hodges feels that jaded people have been weeded out of the crowd for virtual open mics. “You just have a huge community of people that want to be so supportive because they know how tough this time is, and you’ve gotten rid of all the jaded bitter people that have been doing it,” he said.

Other comics have also noticed the receptiveness of virtual open mics, but have also cited how drastically different it is. Ahmed recalled her first virtual open mic. “The first virtual stand up show I did I was extremely nervous for it,” she said. “I was like, ‘Do I sit down, do I stand up, do I have a microphone just they’re not plugged in?’ It’s like, what the fuck is zoom comedy?” Ahmed even noted that some comics do in fact have a mic set up, though it’s purely optical.

Lyn in particular noted how different shows are, because comics can’t get amped up. “You have that transition time where you’re driving to the job… you get there and you’re like now you’re in work mode,” Lyn said. “It’s weird to be like, ‘Okay, I was sitting on my couch watching Selling Sunset, but now I’m on my couch doing a comedy show.’”

All of the stand-up comedians noted that the virtual shows have been great for networking, now being able to utilize comedian social media groups like Displaced Comedians to connect with other comedians who are feeling the same way during the pandemic. They reported that they’ve been able to connect with people from across the United States, to England, to Australia, and even Japan.

“It’s not like a show in public, where I can yell over somebody with my microphone, or just talk louder, or ignore them,” Hodges said. “All you can hope is the host ejects them out of the room.”

Luckily, in person open mics aren’t completely dead. Each comic said that the socially-distanced comedy show held at Buskey Cider, Back Alley Comedy, is an amazing experience. The show is outdoors and there is limited seating with table reservations available.  Even when the shows sell out, patrons are allowed to watch from afar while still observing social distancing guidelines.

There’s also an open mic at Intermission Beer Company that each comic spoke highly of. The Funny Bone Comedy Club is looking at reopening soon, and a new comedy club, Sandman, is opening up soon in the former Champion Brewing location.

Comics like Lyn are extremely grateful for these kinds of shows that are serious about safety guidelines. “I have a couple of health problems,” she said, “so I’ve been maybe even more cautious than other people about not venturing out too much.”

Ahmed said that when she did a set at the Buskey Back Alley Comedy show, she saw first-hand just how much people have missed watching stand-up comedy when it started to rain.

“They sat outside through [rain] — not sprinkling rain, it was raining [hard] on them,” she said. “We kept the show going, and not a single audience member left until the show was done.”