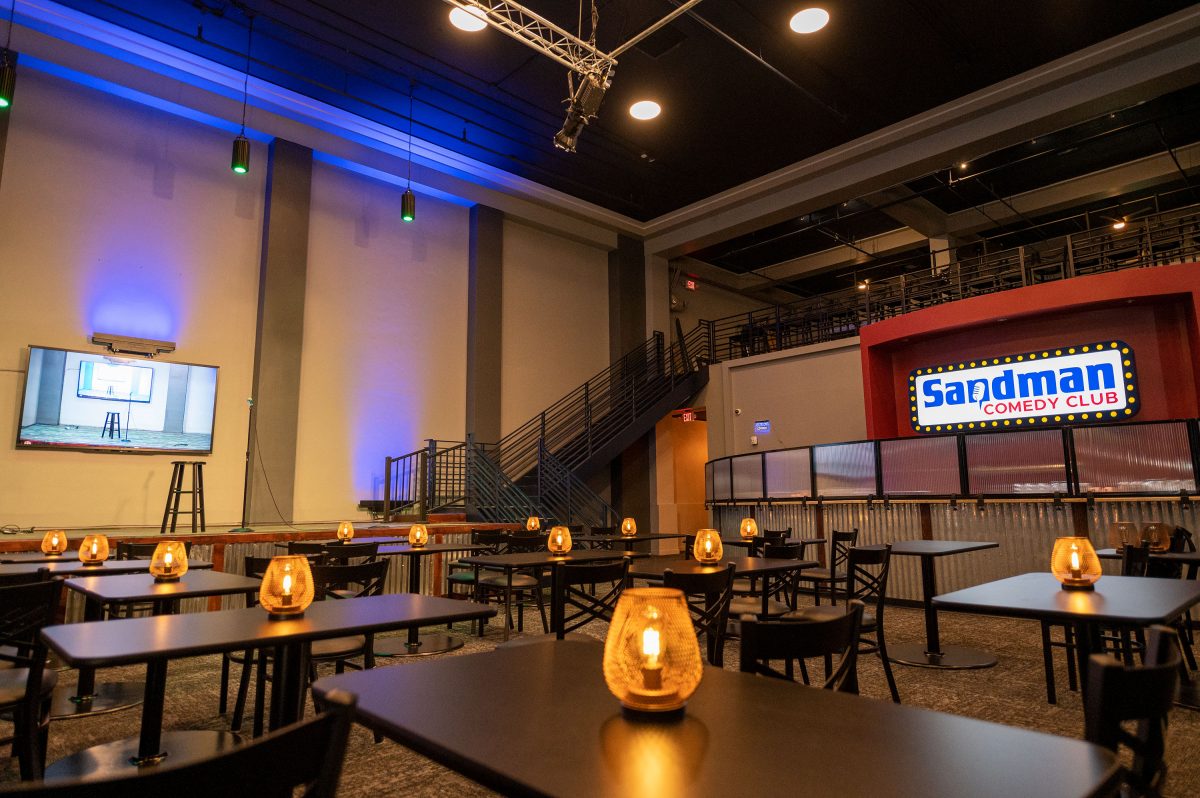 Scrolling through the internet one day, I came across an advertisement for a new comedy club opening on 4th and East Grace in Richmond. The location was previously Champion Brewery, Club Aurora, once upon a time a bank, and now: Sandman Comedy Club. Looking at their post, there were recognizable touring comedians from across the country. I reached out to the local owners, Michael and Carrie Sands, who agreed to meet up with me for an interview, to give me a tour of the club, talk comedy, and talk about opening a comedy club in the city a midst a pandemic.

The Sands greeted me and brought me to a table. On my way to the table, I saw the whole room. A big floor with rows of tables for two and four, spread six feet apart to the CDC standard. On the sides of the room were elevated areas with the same outline. In the back is a staircase that led down to the stage with a mic stand that looks over the room. The look was completed with a nice bar with taps from local breweries, among other beverages.

Michael wasted no time in telling me his vision: “The way it’s set up is that the headliners will bring a feature with them, and then we have a person MC for every show. And we want to use all the local Virginia comedians to MC the shows. We’ll rotate.” Upcoming headliners include names such as: Finesse Mitchell, Adam Ferrara, Gina Brillon, Shane Gillis, and many more filling up their calendar. This is a comedy club in the city dedicated to stand-up and its traditions, including an open mic night every Sunday.

Opening this venue wasn’t an easy task given the past year’s events. They officially owned the property on January 1st of 2020. “Just as we got to the point where we were going to start remodeling, Covid hit,” Michael explained. “Our initial goal was we were going to open in May of [2020]. Then we were hoping maybe August, but things just kept getting worse.” The owners used the year to remodel and make the club they wanted. With vaccines rolling out, more of the public opening up, and some careful planning, they decided to open at the end of April.

We talked about the regional comedy scene and the national acts working together at their club to add to a scene that has been under our noses. “I think it is a comedy city,” said Sands. “The proof of that is that, because of the lack of a stand-up comedy club in Richmond, you see a lot of these small venues having the local and regional comedians do shows at these spots. And that’s a great find.”

The tour through the club showcased its sound booth, kitchen, and upstairs, which included more seating and a green room for headlining comics. Visions of possible future memories were surrounding every room and hallway. The bar menu (which is available on their website) is priced fairly, unlike many clubs I’ve been to in the past, and includes a large menu that includes vegan options. Some comedy clubs automatically charge for two drinks with admission but Sandman wants to go a different route than some of the chains around the nation.

I had never been in this building when it was open as other venues. I was pleasantly surprised to walk by some bank vaults used as storage. You can live in this city all your life and forget there’s so much history here.

We talked about some of our favorite comedians on tour, and also how the Sands want to add to a hungry local scene that’s looking for a new spot. As the tour came to a close, the owners want to let the people know: “Give us a chance. We’re going to bring the best talent we can get and it will only get better as we get past COVID and eventually to full capacity,” Michael said. “We just want to bring laughter to every body because we know they need it,” said Carrie Sands, backing up her co-owner and husband.

Humor means a lot to so many people in Richmond and I think this is great step for our city’s culture. Now there’s a new place comics and fans of comedy can go to that’s dedicated to the set up and punchline. Located at 401 East Grace Street, Sandman Comedy Club’s opening night is April 29th with Finesse Mitchell doing 7:30 and 10 o’clock sets all weekend. Doors open an hour before the show starts so be sure to get there early to try the menu, order drinks, and get ready to laugh. To order tickets and check out their schedule and menu, go to their website at sandmancomedyclub.com.