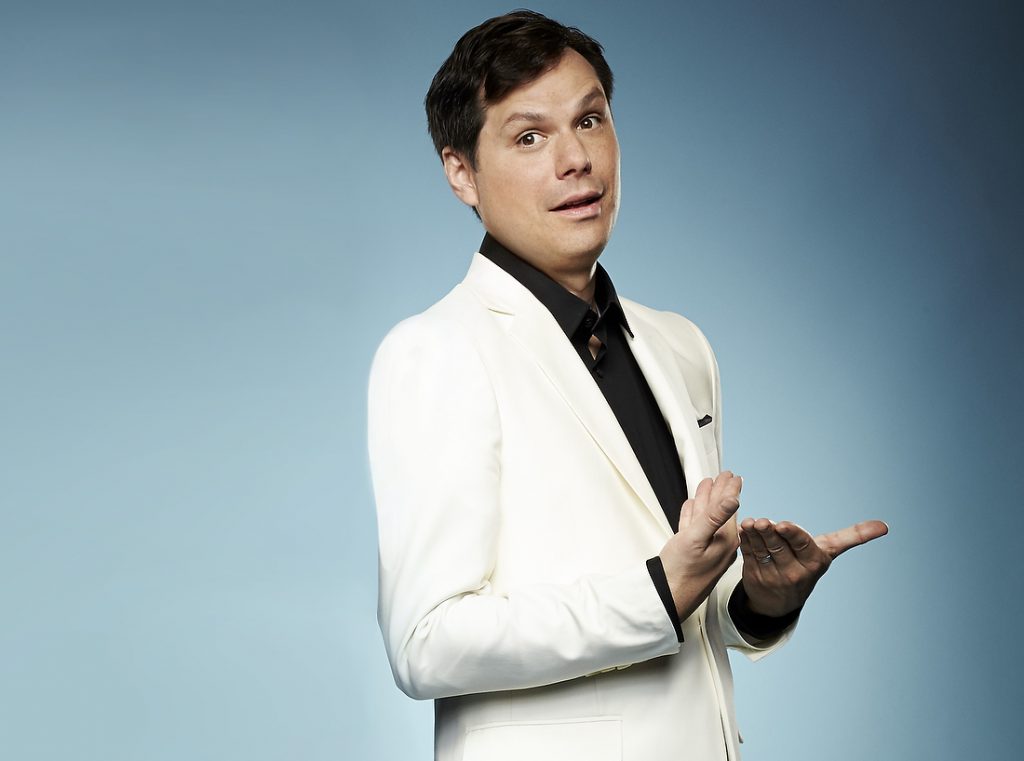 From The State and Wet Hot American Summer to his recent renaissance as an author of children’s books, Michael Ian Black’s done it all. In preparation for his appearances this weekend and Sandman Comedy Club, Gabe Santamaria caught up with him to talk about fatherhood, summertime in the south, and Teenage Mutant Ninja Turtles.

This week I got to interview someone I grew up watching. This one, I was actually nervous for. I’ve always been a fan of Michael Ian Black. He’s known for many comedy TV series and movies, including The State, Viva Variety, Wet Hot American Summer: First Day of Camp, and Michael & Michael Have Issues. He has a quite a lengthy career and is just a non-stop worker full of humor and creativity. We talk about fatherhood, writing children’s books, and his life as a Ninja Turtle in his early career. Here’s our conversation:

Gabe: So, you moved to Savannah, Georgia recently. How are you liking it?

Michael Ian: Oh, it depends on what the temperature is. And what the humidity is. My mood about Savannah rises and falls with the dew point.

Gabe: Well, you get all the seasons. It certainly gets hot in the south.

Michael Ian: Yeah, it’s pretty hot and sticky. But apparently, you know, eight months out of the year. It’s gorgeous.

Gabe: So, I want to go way back. When you were first getting your start, you got a job going on tour as Raphael of the Teenage Mutant Ninja Turtles. What was that experience like?

Michael Ian: Well, I was nineteen and I was getting paid to drive around the country and see the country. And I was basically on my own with just me and my friend. And it was great. Except when you put on the suit. The suit stank, the way you would think a turtle suit would stink. So it smelled, but it was fun.

Gabe: That sounds fun. In more recent years you’ve been writing children’s books. How’d you decide to get into that work?

Michael Ian: I had two kids and I would read stories to them every night. And I thought to myself after, you know, the 10,000th night of reading bedtime stories that I bet I could write a children’s book at least as terrible as the ones that I’m reading to my children. And if I could do that, then I could probably get a children’s book published. So that’s what I did. I just started writing children’s books home. Mostly for fun.

Gabe: That’s awesome. And on the other hand, you’ve written some BOOK books. In 2020 you put out a book called A Better Man: A (Mostly Serious) Letter to My Son. What is that book about?

Michael Ian: Yep. it was a letter to my son, who is now twenty. He was eighteen at the time, when I was writing it. And it was just advice on being a guy in the world. What I thought would be advice, and some thoughts that I thought would be helpful for him as he entered the world as a young man. So it was a more serious book than I’ve ever written before, but I think it was good, and there’s jokes in it.

Gabe: I’m sure it’s fantastic and I think it’s so cool for you to put out something so personal. Being a dad is huge. And you have kids out of high school now. How’s that sink in? Are you still growing as a parent?

Michael Ian: Once they left high school, then I just wash my hands and I don’t even speak to them anymore. My job is done. I’m hoping there’s some sort of pension involved, but I haven’t seen a check.

Gabe: [laughs] You’ve been in the business for a long time now. Sketch comedy, improv, standup, writing, directing… such an impressive resume. What were some of your earliest works in comedy?

Michael Ian: Well, when I was in college, I started doing sketch comedy with a group that we started called The State.

Michael Ian: And we ended up with our own show on MTV, and then I just kept going in comedy. It wasn’t my intention to end up in comedy, but that’s what happened. Turned out that I’m hilariously funny.

Gabe: [laughs] Thanks so much for doing this. I look forward to seeing you at Sandman Comedy Club. Have a nice rest of your day.

Michael Ian: Thanks! You too. Take care.

Very thankful to talk to someone I’ve admired for so long. Michael Ian Black is so funny and very kind. Turns on the dry sarcasm or the hilarious charisma like a light switch. You can catch him in Richmond at Sandman Comedy Club from Thursday September 30 to Saturday October 2, performing five shows over three days. You don’t want to miss this. Be sure to show up an hour early for food and drinks. Tickets can be purchased at Sandman Comedy Club’s website.