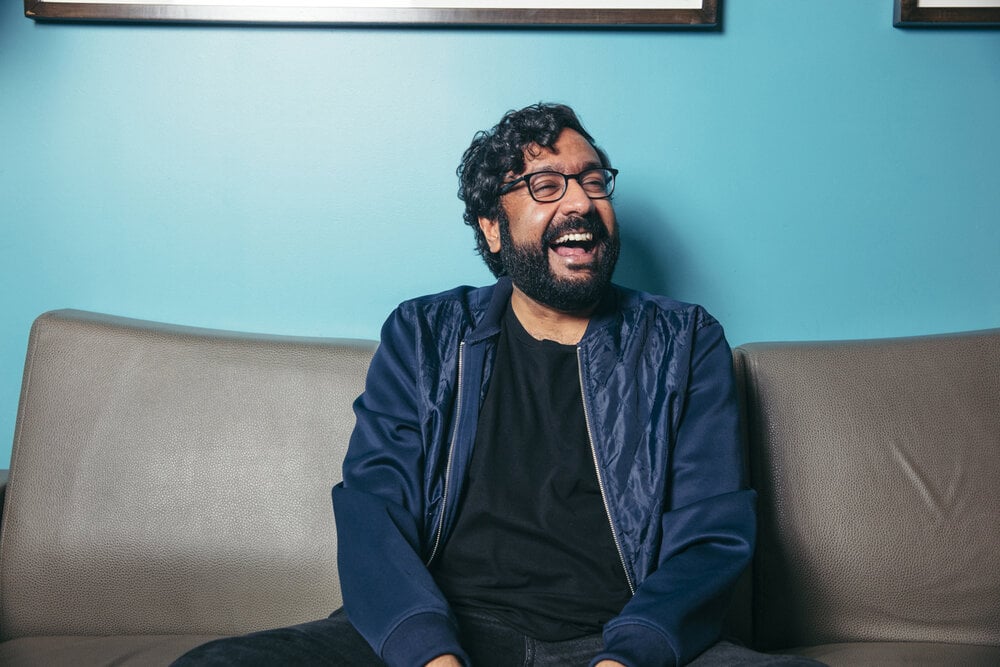 Hari Kondabolu is a standup comedian, podcaster, and the director of documentary The Problem With Apu. This weekend, he brings his fearless, politically informed comedy to the Sandman Comedy Club for five shows in three nights. RVA Mag’s Ash Griffith spoke to him about politics, the pandemic, and being a new father, among other things.

If you’re not already familiar with Hari Kondabolu, it’s high time you catch up on this incredible comedian and join me in wishing that he was our best friend. You’ll have your chance to get to know him starting on Thursday, May 19th, when he’ll begin his three-night Richmond debut at Sandman Comedy Club. At these five shows, he will be working on new material for a one-hour special he’ll be recording in a couple months.

Kondabolu is known for focusing his material on politics and social issues such as racism and the LGBTQ community. You might also know him for his documentary The Problem with Apu, which premiered on TruTV back in 2017. His latest special, Warn Your Relatives, is available now on Netflix, and serves as a good entry-level guide to his work. The special, which took a couple of years to write, was filmed in Seattle. Kondabolu originally started his career in this Pacific Northwest city, and still returns often. For him, filming the special where he has had so much support just felt right.

“That was a really fun hour that felt like a nice range of material, and it had stories, [both] political jokes and some family stuff. A nice mix of things,” said Kondabolu. “I really, for that hour, wanted [it to] have that range. Like, I wanted people to be able to see this is what I believe in. This is what I stand for. This is who I am. This is my family. And yet, at the same time, I didn’t want people to think that it was going to be didactic and harsh without being silly and surreal. So I felt like, ‘Okay, it had a good balance.’ I guess that’s what I wanted more than anything: an hour that was very me and uncompromising, but still showed a range of the kinds of things I can do.”

He pointed out that Warn Your Relatives is probably not as harsh as the rest of his work, especially his 2014 debut comedy album, Waiting for 2042, which he considers his rally record. Warn Your Relatives intentionally has a good mix of everything. including visuals. It was designed to give you a good idea of who he is as a person, something you might not necessarily have gotten from Waiting for 2042.

“It just feels so aggressive. And I love that record, but I do think that on this one, [there’s] more visual stuff but then there’s some wordplay, and family stuff. There’s things that give you a pretty broad sense of who I am,” said Kondabolu. “At the same time, it’s uncompromising in a lot of ways, which I do like. It’s not like I toned down what I think, but I did find, ‘Okay, if we’re going to do this, make sure we do something where people are like, he has a mom and a dad and this relationship with them, and make sure they get to see a more complete picture.’ So I think it is a good intro. If you see that, I think you’ll get a good sense of, ‘Oh, this is the baseline. This is what this guy does.’”

You can absolutely thank his mother, by the way, for his incredible sense of comedy — even the dark side. He often mentions that he gets his sense of humor from her, specifically crediting her with the darker side of his humor. Even today, she still lets him know that she’s watching, even letting him know her thoughts on his tweets. He knows that if his mom tells him something is a good idea, it’s definitely a keeper.

That said, like any good parent who wants the best for their child, she wasn’t always super-excited for Kondabolu to start a comedy career — especially since, at the time, there were not many South Asians in standup. There was a lot of hesitancy about the idea of her son being the one putting himself out there.

“I think she was always supportive in terms of me having hobbies and things I cared about, but the idea of doing it professionally, especially when I started, worried her,” said Kondabolu. “Just because there weren’t any other examples, really, of South Asians doing it. Aziz [Ansari] had just started, and Mindy [Kaling] had just started on The Office. It was early and there weren’t that many examples, especially of standup, particularly making it. So to her, it’s almost one of those things that… you don’t want your kid to be the one that breaks ground, because there’s a risk in that.”

When he isn’t doing standup, Kondabolu can usually be found working with his friend W. Kamau Bell in one way or another. From 2012 to 2013 he was not only on the writing staff but appeared as a correspondent on Totally Biased with W. Kamau Bell, which aired on FX Network. He teamed up again with Bell to co-host the podcast Politically Re-Active. Started in 2016, the show was originally meant to document a “changing of the guard,” so to speak, from the Obama administration to the Clinton administration.

The show then continued on for a second season to cover the Trump administration, and then a third to cover the current Biden administration. Despite the assumptions one might make, though, one thing Kondobalu wants to make clear is that he and Bell don’t just see Politically Re-Active a liberal or leftist podcast.

“It’s very much an activist podcast [in terms of] the people we had on, a lot of whom were working on the ground, in addition to artists who were doing great work,” said Kondabolu. “But we definitely, I felt, did stuff on a cutting edge, and not simply Democrats and Republicans. At the end of the day, that’s part of the game of politics. We’re more interested in the parts that affect people’s day to day lives and are about justice and change. I think a lot of this stuff is so heavy, and kind of thick, in terms of the history and the content. Our job was to be funny, and I think we did a pretty good job of balancing the two.”

There is absolutely no one who will tell you that their life and outlook stayed exactly the same throughout the pandemic. Kondabolu is no different, and while the new material he will be working on at his Richmond dates will touch on previous topics he has covered in his act, he will also be introducing a new subject to the mix — his perspective on being a new father.

“I had a baby during the pandemic, so a lot of it is about what it’s like to be a father during that period of time,” said Kondabolu. “Just the experience of the last year and having a kid. It’s a lot more personal than even my other stuff has been. Not to say that it won’t have my point of view, and that there won’t be a political bent, and that racism isn’t going to be involved. But certainly, it’s the most personal hour I’ve written so far.”

Hari Kondabolu will be at Sandman Comedy Club in Richmond, VA from May 19th through May 21st, with shows at 7:30p on the 19th, and at 7p and 9:30p the 20th and 21st. Visit sandmancomedyclub.com to buy tickets, and for more information. Warn Your Relatives is available to stream now on Netflix.