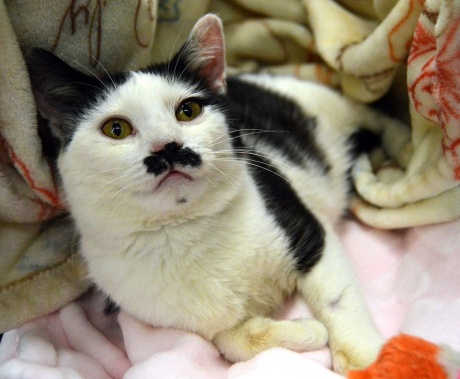 Cat lovers rejoice! Richmond is getting a cat café this spring

Cat lovers stop what you’re doing right meow. (Sorry I will try to keep the cat puns to a mewimum.) Angela and Jeff Sidener, in partnership with Richardson’s Rescue, will open Richmond’s first cat café, Central Purrk and lounge, Zoomie’s in Shockoe Bottom this spring.

Now before you get all excited, no, you can’t pet cats as you sip your coffee and eat your breakfast. They’ve leased two neighboring spaces on East Main Street because you know, Richmond’s pesky health codes and such. The Central Purrk side will be a coffee shop selling coffee and pastries and Zoomie’s will be the lounge and retail space where cat lovers can purchase cat-related items and come in and hang out with cats that are up for adoption.

“The main goal is getting cats homed, I’ve been involved in rescue for years and some of the adult cats, they don’t show well at an adoption stand, it’s very hard to get them adopted so we want a place where you can really see their personality and interact with them,” said Angela Sidener. “It’s a way to help Richardson’s Rescue who doesn’t have a facility.”

Richardson’s Rescue is a local non-profit cat rescue that is providing the cats for Zoomie’s. The all-volunteer group has been around since December 2015 and has about 50-85 cats and kittens in foster homes at one time. It also provides spay/neuter services, veterinary care, in addition to adoption services.

“We have fosters anywhere from Midlothian…to King William, we’re a foster-based rescue,” said Helen Miller, Executive Director of Richardson’s Rescue. “Our passion is with community cats and feral cats so we’re heavy into that and we also help a lot of senior citizens and veterans.”

The group hosts adoptions every Saturday at PetValu in Short Pump as well as Petco in Midlothian. Last year the organization adopted out 378 cats.

Miller said they are always in need of fosters and this lounge is a good way for those not able to have a cat of their own to still enjoy their company in a relaxed, natural setting that’s not a shelter.

“A lot of med students, they’re busy and in that area there’s a lot of apartments…they don’t have time for a pet, but they would love to sit with a cup of coffee and a cat in their lap,” she said.

She added that costs can also prevent people from getting a pet as well.

Angela and her husband Jeff helped to get the rescue off the ground along with founder Jerry Ingram. In fact, Angela said her former job and living situation led to her involvement with cat and kitten rescue.

“I was a court reporter and was fortunate enough to work on the Henrico Circuit Court case of Susan Mills when she was fighting for the right for people to feed feral cats so I got to know some of the resources that were available to the community through that work,” she said. 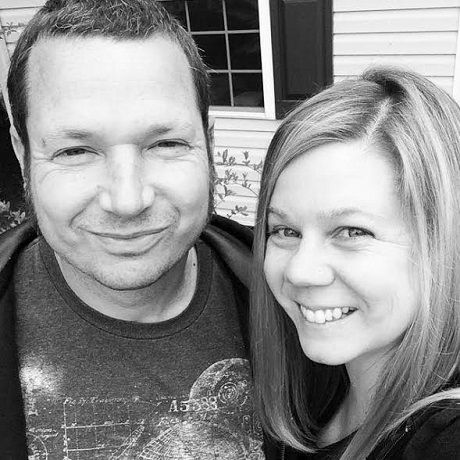 The couple also lived across the street from an apartment complex in Richmond that had a tremendous cat overpopulation problem, which is how the road to her cat café began.

“We got involved in rescue then and haven’t gotten out since,” she said. “We kind of got the idea through reading about the one in New York,” she said. “When DC’s opened, we went up to visit it and that was about a year ago when we decided that we really wanted to take it seriously and writing a business plan.”

The U.S. was slow to catch on to the cat café concept. They seem to have started in Japan and Taiwan and California was the first to catch on to the craze in 2015, followed by New York, and Crumbs and Whiskers in D.C most recently. Style Weekly had the scoop back in December of one woman hoping to bring the concept to Hampton Roads. 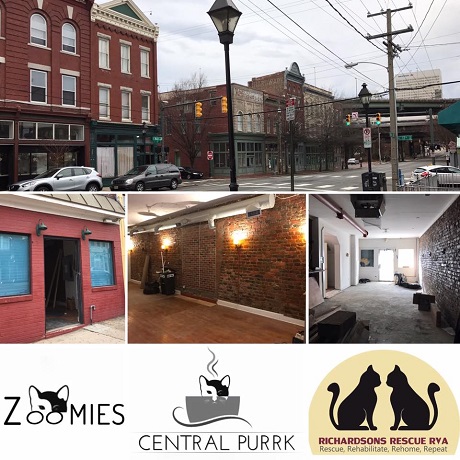 The couple started scouting locations for their potential cat café in Richmond last year and ultimately landed on the two spaces in Shockoe Bottom at 1706 and 1704 E. Main St. in December.

“It’s been a long time coming,” she said. “We’d been looking around Carytown, the Church Hill area, it was so hard to find a place that had separate addresses, but that was close to each other.”

Zoomie’s customers will be able order items from Central Purrk and have their treats delivered while they socialize with resident cats.

The front part of Zoomie’s will be for retail where people can buy kitty toys, custom furniture, hammocks, beds, ceramics, art, jewelry and the back portion of the lounge is where people can book times to visit with the cats.

“At any given time there will be five kitties for you to sit and relax and there will be TV and games,” said Miller. “Every cat that’s in there is available for adoption.”

There will be a TV where people in Central Purrk can watch everything going on in Zoomie’s with the cats once they get up and running as well.

Angela and Jeff Sidener are hoping to have Central Purrk and Zoomie’s open by mid-April. You can follow their progress on their Facebook pages. In the meantime, check out the adorable furballs available for adoption at Richardson’s Rescue here. Adoption fees are $95.

Top image is Nosey, available for adoption at Richardson’s Rescue