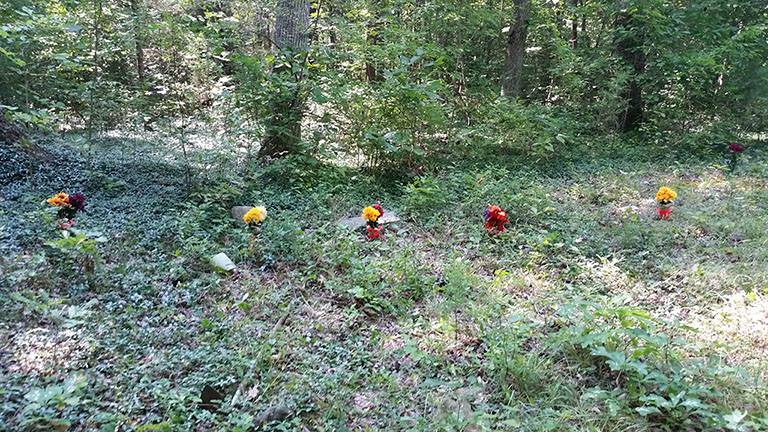 Volunteers for “Will The Stones Whisper Their Names,” a project of the Louisa County Historical Society, climb hills and trek through forests to locate and document African American burial grounds from centuries past.

Gloria Gilmore recalled a man telling her, “When I was a little boy … we used to pick strawberries up a path that led to a cemetery.”

Gilmore works with the “Will the Stones Whisper their Names” cemetery identification and restoration project. Volunteers for this project work with the Louisa County Historical Society to track down historic African American burial grounds in and around the county. The endeavor started in 2017 with a grant from the Virginia Department of Historic Resources.

“At that time, African American cemeteries were determined to be one of the most endangered properties in the state of Virginia,” Gilmore said.

Louisa County, a rural county about an hour northwest of Richmond, has found that family stories like the one the man told Gilmore are one of the most useful ways to identify historic cemeteries. The trip to locate this cemetery led volunteers to private property, where the property owner gave his permission and then joined the search.

“I was ready to give up after a while because I had walked a long way up hills and all over — jumping over some streams and stuff like that,” Gilmore said. “It’s not like a walk in the park.”

The group eventually found the burial grounds on top of a hill. The gravestones were barely visible under the fallen leaves and brush — something the project found to be common.

“The cemeteries were just discarded: trees had fallen, overgrown briars — we’re trampling through them,” Gilmore said.

From the beginning, the project’s main goal was to get the cemeteries on a preservation list. For Virginia, that means either the Virginia Landmarks Register or the National Register of Historic Places, neither of which guarantee funds for upkeep and maintenance.

However, since 2017, Virginia’s General Assembly has been introducing legislation that makes cemeteries eligible to receive funds from the Department of Historic Resources, the same government agency that oversees the Virginia Landmarks Register.

In Louisa County, locating historic African American burial grounds is a community endeavor. The project came together in an attempt to strengthen community bonds across races and generations, but it’s the community that’s helped so many sites be identified.

“Where we could, we coordinated with churches,” Gilmore said.

Church members often led volunteers to burial grounds on private property — some abandoned, some maintained. At one church, a Mr. Thurston told volunteers of a cemetery his family had been taking care of for generations. As part of the identification process, volunteers went out to visit and map the grounds.

“We got on the back of the pick-up truck and bumpity-bump down the road and he stopped and there was this clearing … and there wasn’t a stone at all,” Gilmore said. As the group looked around, they saw tiny rocks, laid out in a line, marking the graves.

“Many times we were in areas that had overgrown,” Gilmore said. “Nobody was doing anything with them — most of them had no stones.”

Without gravestones, volunteers have to identify other signs that a burial ground exists in the location.

“There’s certain things we look for in a cemetery,” Gilmore said.

When it snows, volunteers look for indentations in the snow, where the ground would be sunken-in from being disturbed years ago. A sheet of snow makes the depression in the ground visible to the naked eye.

Plant life is also a good sign of gravesites. Families that couldn’t afford headstones would plant perennials, like yucca shrubs, daffodils, and periwinkle. When gravesites can’t be located, volunteers have even turned to dowsing — a technique they say has been successful for them in the past.

Once located, mapping the grounds of the cemetery helps push the “Will the Stones Whisper Their Names” project to its preservation goal. The Louisa County Historical Society worked with retired engineer Robin Patton to create an app for phones and tablets that uses GPS to help record the geographic location. Volunteers who are mapping the cemetery on location use the app to mark the boundaries — on all four sides.

“The historic preservation group was saying to us ‘we can’t take one point, we got to have at least four,’” Gilmore said.

Identifying the cemeteries is just part of the reclamation effort. After identification, abandoned cemeteries may need cleaning and landscaping, and without funds, it can be difficult to get the work done.

In nearby Orange County, Gilmore and other volunteers work to maintain Woodbury Cemetery. Upkeep of the cemetery is paid for by good old-fashioned fundraising.

“We have singing programs, fish fries,” Gilmore said. But the local fundraisers aren’t enough to keep every cemetery maintained; “Will the Stones Whisper Their Names” is still heavily dependent on volunteers.

The group continues their search for other hidden burial sites. The search can be difficult, but Gilmore thinks the hidden, overgrown, and forgotten gravestones will be found eventually.  “If you be quiet and listen, you’ll find (them).”

To see a map of the gravesites the project has mapped thus far, go to Louisa County Historical Society’s map page here.