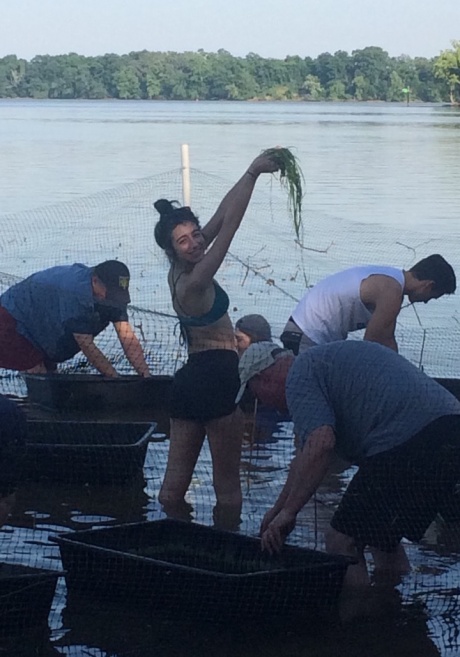 After almost six months of sweat, tears, and conscientious underwater gardening, our bay grasses, as part of the Chesapeake Bay foundation’s Grasses for the Masses program, made a new and more appropriate home on a beautiful shore off the Rappahannock river, a small and seemingly untouched area of forest with the stillest water I’ve ever seen.

Our previous planting date was scheduled for Chickahominy Park but prior weekend’s torrential downpour made it impossible to plant. Though I understood that I would have to be physically planting on the shore, I didn’t realize how big of a deal flooding is until I was in the water myself. Instead of Chickahominy, we decided on the Port Royal planting – a historic yet small town north of Richmond in Caroline County, and a brand new site arranged by the Chesapeake Bay Foundation for this year’s planting.

But before anything, last Thursday, I collected the equipment from the RVA Mag office where most of the sweat and tears were shed because our AC had gone out earlier that morning. It took about five trips to the car and hoping that no one noticed me toss gallons of water from the window off the third floor. (Sorry, but not sorry?) 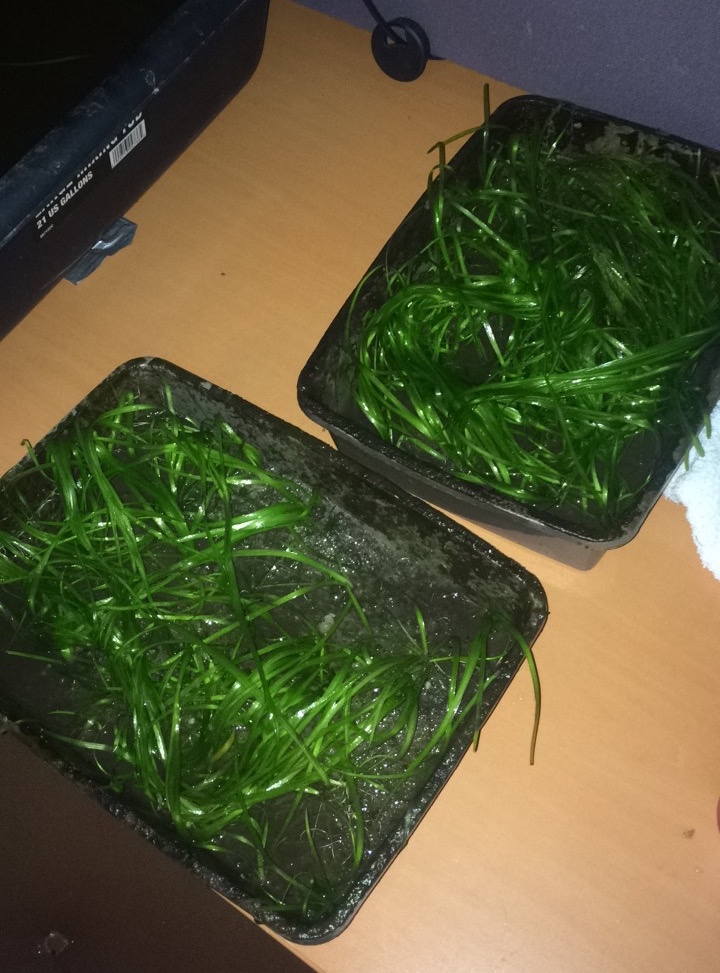 In order for everything to remain alive and well for the hour-long road trip, we left a little water in the pans with wet paper towels on top and loaded the larger aquarium, the lamps, the water pump, and my bucket into the back of my car. After stopping for the obligatory road trip snack, we hit the road at 4 – the planting was expected to run from 5PM to 7PM, to ensure low tide.

Arriving at the planting almost had me thinking that we weren’t in the right place. One of the final turns was into a small neighborhood, and eventually the road turned to gravel where there was a small dirt parking lot where we all had to meet. To our right was a house that looked like it was plucked out of 1804, on acres of land. To our right was the CBF set-up and the rest of the lovely grass growers, where we met up with Grassroots Coordinator Blair Blanchette, who you might recognize from the other updates. As growers kept trickling into the parking lot, Blanchette explained what the plan would be: return our equipment to designated bins and load our grasses into the back of a van that’ll be drive down as far as possible to the shore, and that we’d be walking and following the truck through a mile-long path. 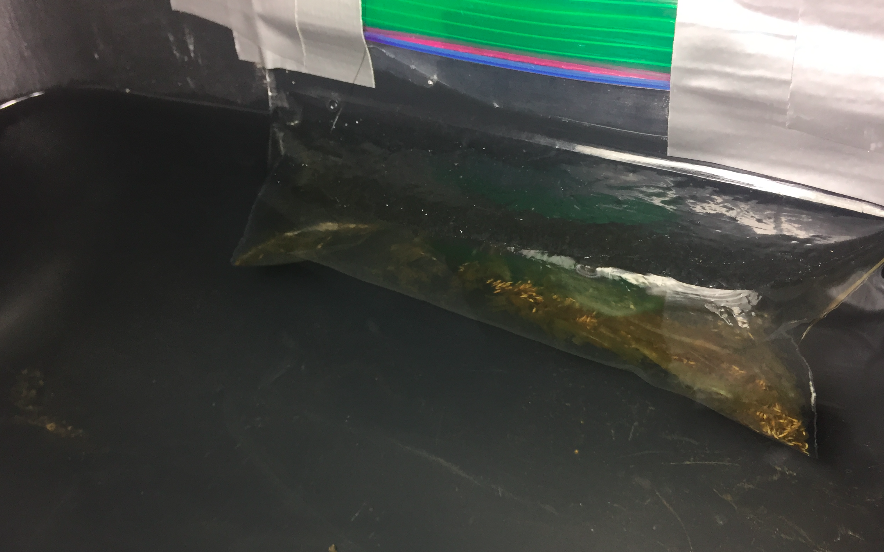 “This is the quietest planting group ever!” Blanchette would say a couple of times. This was one of the smaller plantings and seemed to be going rather smoothly. Other plantings this season weren’t just larger but experienced some obstacles like heavy rain and field trip rescheduling.

The group of about 15 to 20 growers were donned in water shoes, hats, and sunglasses and all of us had traveled some distance. One grower traveled two hours to make the planting. I mean, I know people who don’t have the energy to recycle, so we were clearly among people who really cared about service to the environment. I feel that like explained why they were all so friendly, if a bit quiet.

Blanchette reviewed with us the exact purpose behind going through these months taking care of our grasses every single day – after settling into routine, even I had forgotten exactly what the benefits were. Over the months what we really grew were habitats for underwater life, food for those critters, shoreline protection, a way of restoring the grasses that have declined through the years, as well as a way to mitigate climate change. 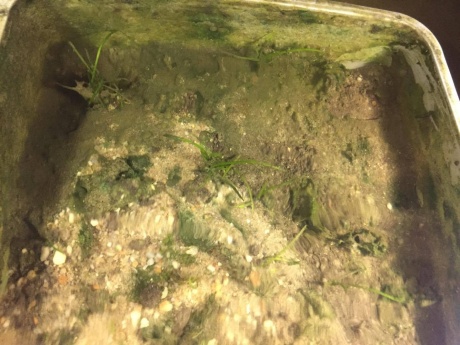 Wow. We did that!

After reviewing basic safety procedures, we set off down the road and into the woods. The shore we were headed towards is part of the Rappahannock River Valley National Wildlife Refuge, which seemed successful at its job due to the large amount of bugs so weird and loud they sounded like they were playing the kazoo. The surrounding area was so peaceful and clean, we would have felt as if we were the first to explore this portion of the river if a path hadn’t been cleared for us already.

Blanchette backed her van as close as she could down the path, but it was up to us to bring the rest of the stuff down to the actual shore. After the walk and carrying stuff down the hill in 90 degree weather, everyone was pretty eager to get into the water.

Blanchette gave out long bamboo sticks to each grower for two reasons: one was to push your bin of grasses down to the enclosure, and the other was to mark the spot where you planted so others wouldn’t step on top of it. I could tell easily who were the experienced growers – one of them got a stick and hopped right into the water towards the enclosure, dragging her grasses alongside her. 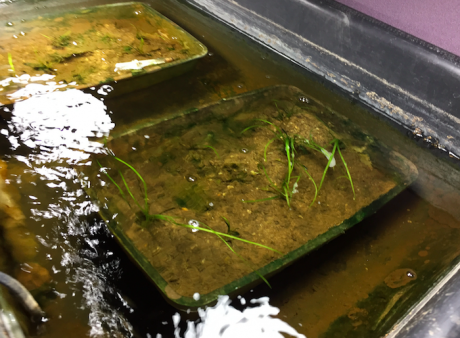 Inspired by this confident grass grower, I hopped in and worked my way through the shallow water – it was about knee-deep but we had to crouch down to plant. We put our sticks down into a spot of our choosing, and following the lead of the experienced growers, I dug a hole around the stick with my hands. If you’re not a huge fan of nature, I don’t think this is something you’ll enjoy, but you should do it anyway because you need to get over it and broaden your horizons.

Then, I double checked with Blanchette for the next step because it seemed a little weird.

“So I just put my hands right in the grass and pick it up and stick it in the water,” I said, a little skeptical. Blanchette explained that yes, I was to stick my hands in the soil and would need to rip the roots, which was actually a good thing. Heavy root formation is indicative of good, healthy grass, even if it felt like I was committing a crime by pulling them apart. But I proudly kissed them goodbye and buried them in the quicksand-esque river sediment that was going to swallow me whole if I didn’t get moving soon. 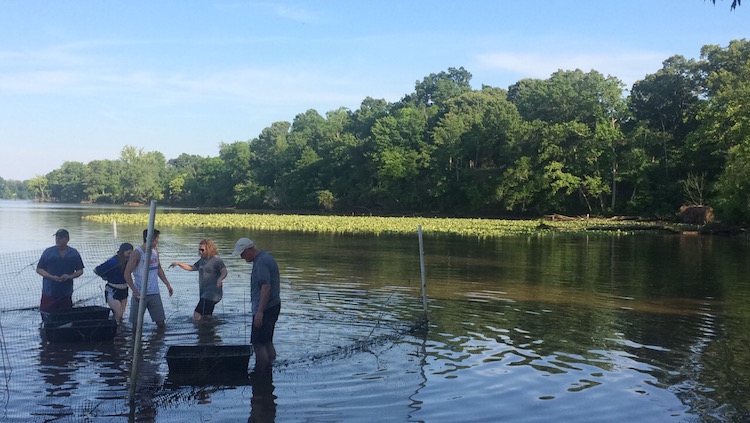 The last step was cleaning the pans and the larger container. If you remember, we had a swampy, smelly algae situation over the past couple months. It’s sorta-kinda like never cleaning a fish aquarium. Our aquarium wouldn’t be as bad as a fish’s, but it was still home to soil and organic matter, which is not what we want to leave Blanchette with after she’s been so helpful and excited. So we all put a little vinegar in the tubs, grabbed some steel wool, and scrubbed away.

The process was surprisingly quick and painless. The water wasn’t cold, the people were kind, and being able to end the process in such a unique and hands-on way was such an exciting experience, save the quicksand-like texture of the bottom of the river that I was sure was going to take me. 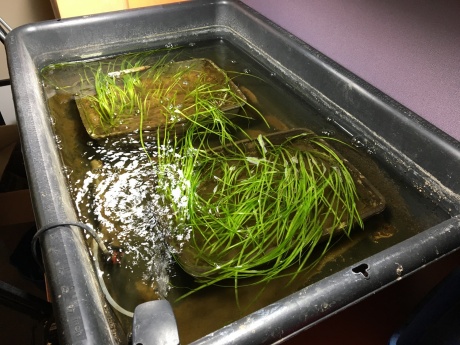 Bay Grass Update #13: Into the wild

Everyone left whenever they were done, so we ended up walking the mile back alone, admiring the open landscape and running from the kazoo-bugs.

Even if the process of maintaining the aquariums became a bit frustrating at times, particularly because it was in our office and not our own homes, the planting was a satisfying end to a very important project initiative from the Chesapeake Bay Foundation. Through the concerted effort of the CBF, the state of the bay has improved slowly but surely.

According to the CBF’s health index, the Chesapeake currently gets a grade of C minus. This takes into account the state of pollution, habitat quality/quantity (our grasses), and fisheries. So while you might be stoked to get a C on an exam, it’s very far from where the CBF says they want to be, and it’ll never be what it once was hundreds of years ago.

But Grasses for the Masses is an extremely important part of improving the overall health of the Bay, and not the only way that you can participate. As you might’ve noticed, the presidential administration isn’t too keen on environmental protection. Work from the CBF, volunteers, and just regular people who want to get involved, can help ensure that we don’t actually go backwards. 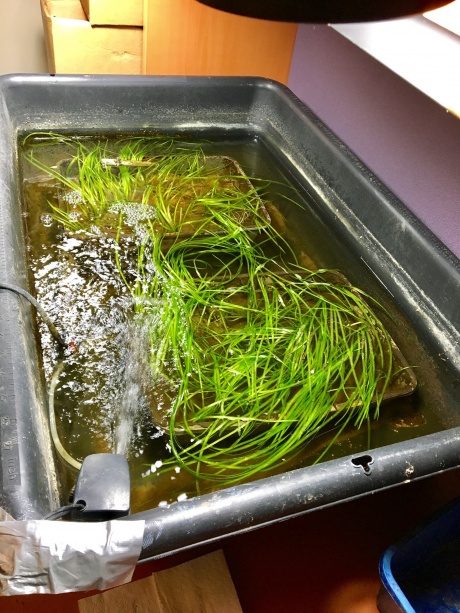 Bay grass update #14: Into the Rappahannock (for real this time)

Best case scenario, I hope you’ll consider participating in Grasses for the Masses in the future if you have the ability to. There’s nothing like physically planting grass to help drive home the value and importance of the effort of just one person.

The CBF has other programs and initiatives you can get involved in too. But if you don’t do anything else, stop leaving your cigarette butts and beer cans all over Texas Beach and Belle Isle. Please. It makes me and the Earth cry real tears.