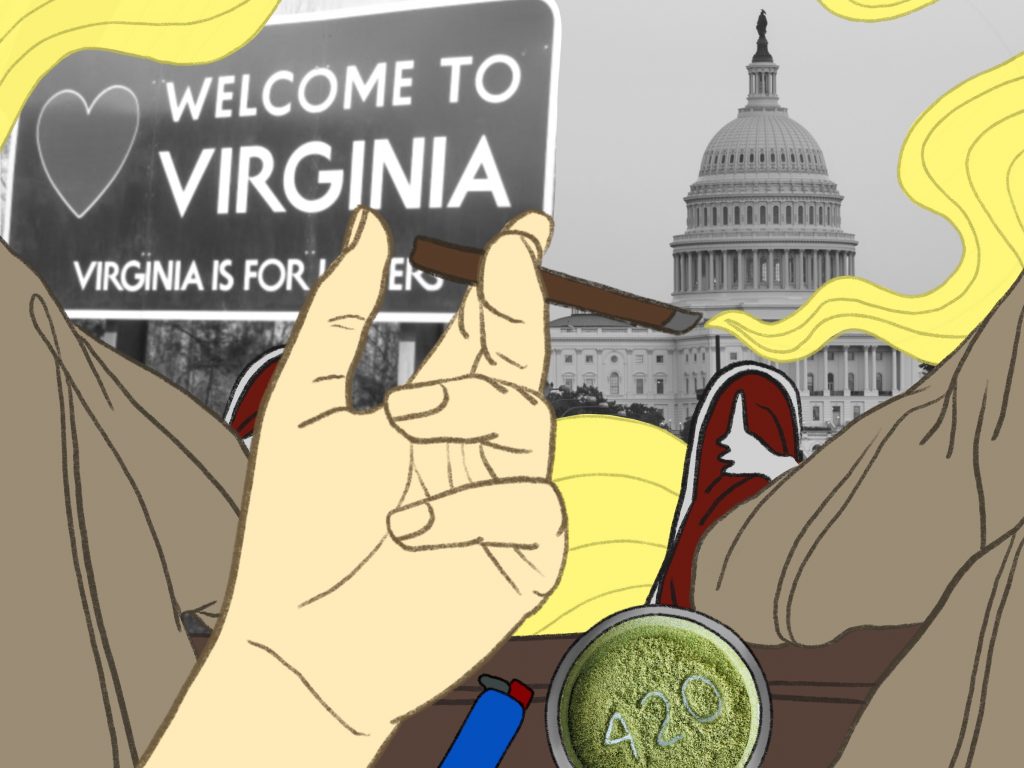 It’s crazy to think that just 200 yards can be the difference between getting locked up and being fined for enjoying a fatty with friends while overlooking the Potomac. With criminal marijuana laws going up in smoke back in February 2015 due to Initiative 71 – which legalized marijuana for those over 21 – there has been tremendous attention centered around the various distribution loopholes and how that impacts everyone along the DC and Virginia border.

Let’s get one thing straight though, Washington DC is not the wild west of weed. While it has been decriminalized, a person still can’t smoke on public property or sell openly. Nonetheless, some of the district’s more aspirational potheads have started to get pretty creative on circumventing the laws; discovering those loopholes to turn what was once an illegal practice into a legitimate business.

For this 4/20, RVA Mag sat down with some people about their experiences with weed in Northern Virginia (NOVA) since the law in DC has been passed – given their proximity to one another.

Unsurprisingly, they requested to remain anonymous, so we will just call them Cannabis Carl and Stanley the Stoner.

“There is no doubt the vibe around smoking weed is different outside of the border since its decriminalization in DC,” said Carl, discussing the proximity issue. He went on to say that nobody in the weed game is still 100 percent comfortable with the ambiguities “Now that the laws are more accepting of weed in DC, cops digression has noticeably shifted to be more lenient in response.”

Yet there are differing perceptions in NOVA. Stanley spoke to RVA Mag about police stalking hot-boxed cars with Virginia license plates right outside of the District’s boundaries – just waiting to pounce. This speaks to containment and a desire to prevent any kind of cross-border ‘weed-culture bleed’ into the surrounding counties.

“Because it is Washington DC, feds are going to be super narky regardless of what the situation is. Weed is still illegal federally obviously, so you will see the saddest of cops itching to bust someone making a wrong turn and ending up in a federal zone with some weed on them,” said Stanley. “It is most definitely not the same as when other more liberal states had originally decriminalized the drug,”

Carl and Stanley both agreed that the cultural experience of smoking has definitely shifted since Initiative 71. “The thing to do back in the day was to sneak around to our favorite secret outdoor spots, said Carl, adding that the Georgetown bridge was his favorite spot given its “sketch factor.” He went on to say that everyone in NOVA now goes into DC to check out the new vendors, which are essentially “pop up shops where home growers showcase their product similar to a farmers market.”

Even as DC has progressed into the 21st Century, it is still important to remember that marijuana laws in Virginia are exactly the same. This means everyone repping the DMV will still not be saved from the DEA. According to Jenn Michelle Pedini, executive director of Virginia NORML, “Washington, DC’s Initiative 71 has had no impact on criminal justice reform regarding marijuana policy.” (Check)

When a bill gets introduced, it must be approved by a committee and sometimes even a subcommittee before making it to the full Senate or House for a floor vote. Senior committee members perceive their legislative districts and the District of Columbia quite differently and are not swayed by the District’s loosened marijuana laws. According to Pedini, it is not the legislature as a whole that prevents marijuana policy reform, rather it is due primarily to the majority of committee members who are former or current prosecutors.

Lack of knowledge and the surrounding social stigmas regarding the plant essentially leaves these officials to act as gatekeepers, preventing these marijuana bills from advancing to a full floor vote.

But keep your hopes high as a kite because Pedini predicts that if and when these bills finally reach the Senate and House floors, they are more than likely to pass in our favor.

Nonetheless, RVA Mag talked to a couple dealers from the NOVA area, who once again preferred to remain anonymous, to dig a little deeper into what sort of backlash Initiative 71 has created for the underground weed distribution industry – both inside and outside of District lines.

“Most of the people I serve are still in high school,” said one of the dealers. He went on to say that Initiative 71 doesn’t impact their business because the kids aren’t of age, but they “have such big networks that weed is almost as accessible as water for them.” This means that a lot of people in NOVA would rather stick with the weed they know as opposed to travelling to DC to pay for a more expensive product.

“I did notice a decrease in the older people I used to serve, like businessmen and parents, as well as the guys that pick up weight more frequently and really harp on consistent quality,” said the dealer. “Which makes sense to me because the inflated DC prices are worth a more convenient and legal transaction given their careers and families.”

Proximity doesn’t end in NOVA though, Richmond dealers are also making the trek to the nation’s capital to explore new products and take advantage of the loopholes. After sitting down with a local dealer, “Patrick the Pusher,” over some “coffee”, he described his entire process – from the acquisition of the product – to the curation and transportation across the border, right up until it reaches the hands of the customer.

“It’s much easier to get my shit in Richmond, but when I do make DC runs, I use wheresweed.com,” Patrick said. This app allows a user to see a list of all the specialized vendors in DC, along with a menu of their product.

“Each vendor is a little different, but after you make your selection and put in a delivery address, it usually takes around two hours for them to respond and deliver, which is just enough time for me to make my way up there,” he added.

The weed game is also a business, something not lost on Patric, “Like any business review on Yelp, their response time, efficiency, and professionalism is a direct reference to the quality of their product and made me feel like it was less quality.”

In the end, it is the loopholes that many people exploit in order to get their stuff.

For starters, the District does not permit the distribution of marijuana in exchange for monetary compensation, but there is nothing stating that you can’t just give it away.  Most vendors sell a sticker or t-shirt that comes with a complimentary nug as a “free” gift depending on the value of whatever you buy.

Even for something like wheresweed.com, it is only available for people living in DC, but there is nothing stopping an outsider from putting a public parking lot or intersection as their home address.

“I feel a sense of pride buying local,” said Patrick. “It almost reminds me of grocery shopping online, it’s really that easy. I have never used the same service twice, but that’s not to protect me, I hadn’t even considered getting in trouble, it is more just to explore my options.”

Although vendor prices are slightly inflated compared to street prices, it is definitely more consistent. While you can still get great quality weed on the street outside of DC, there are no certainties that it is going to be good every time. That being said, you can’t get more than one ounce at a time, which makes it harder for people looking to resale in Virginia.

Initiative 71 seems like a win-win for everyone, fewer people are getting incarcerated, the economy is growing, and people are happier and higher than ever. This happening in the Nation’s capital also has a certain kind of poetic justice to it. Times are definitely changing.

Although the weed game is still highly unregulated, Virginians are still finding their way around the law. It is to early to tell if this newly adopted democratic “weetiquette” will immerse itself into the Commonwealth or trigger a greater containment effort by law enforcement. But until then, happy 4/20 everyone, and be sure to fix yourself a nice bowl of Weedies and milk before bed.