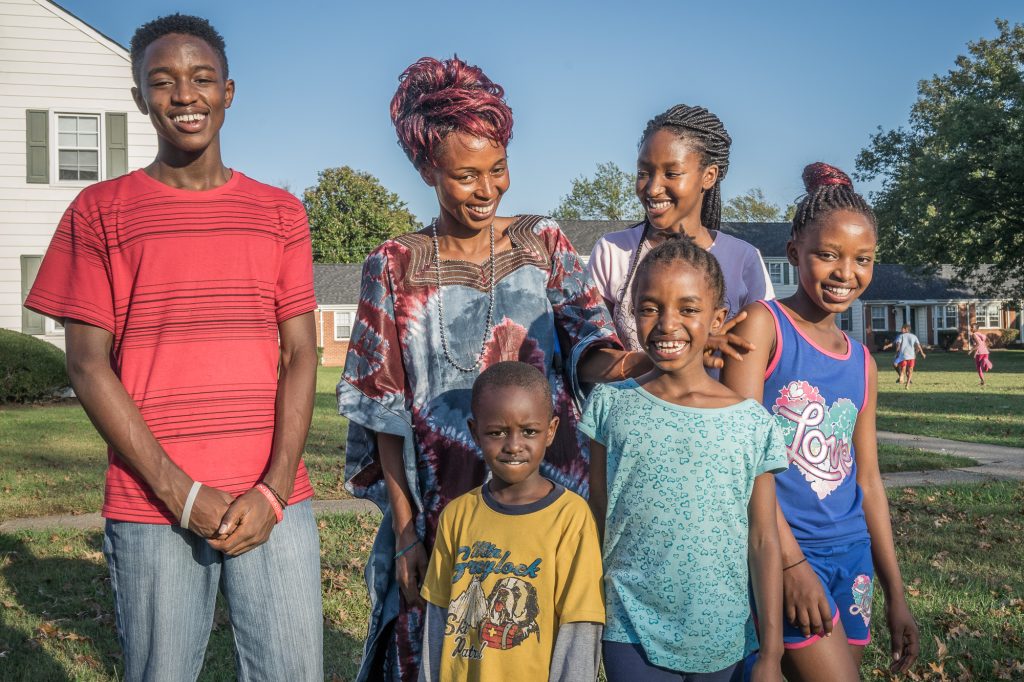 Imagine a scenario where armed militia comes to your neighborhood. They indiscriminately shoot, kill, and rape as a tactic of war. They are hardened men who have been living and fighting in the bush for years on end. There is no compassion in their cause, only cruelty. Some of them are children, recruited to kill by men looking to control vast resources like cattle, gold, and coltan–a mineral used in smartphones and everyday electronics. To these men, material goods are worth more than the lives they are taking.

Try to imagine having to flee into the lush undergrowth of the Great Rift Valley while bullets fly overhead, snapping branches and bones as they find their targets. Imagine losing your family in the process. Not knowing which direction your husband ran, which direction your children ran, only knowing that running means surviving, and surviving spares you a fate worse than death. Then you feel the burning sensation, and the loss of control as blood spills out from where the bullet entered your leg.

Most Americans will never be able to imagine this scenario, but for the people of Central Africa, it is all too familiar. “As soon as we saw people killing and people dying we ran into the bush,” said Esther Nyirarwaka, in her native language, Kinyarwanda, one day at her home in Henrico. “We went in the bush to hide.” Esther, a refugee from the Democratic Republic of Congo (DRC), told me this story while she peeled potatoes and relaxed with a few other women who had experienced similar circumstances in DRC.

“You run for your own life, you spread out.” Esther’s village was attacked by a militia known as the mai-mai, a kind of civil defense force formed to resist the militia that fled into DRC after committing the genocide in Rwanda. The history of the conflict in DRC goes back to the time of colonization by the Belgians, but since 1994, the country has been in a state of war and de-facto instability. That year, Ugandan and Rwandan forces invaded the landlocked country, engaging the Rwandan génocidaire and overthrowing the long-running authoritarian regime of Mobutu Sese Seko in the process. Since then, almost 5 million people have died, either through war, disease, or starvation–making the conflict in DRC one of the most devastating since World War 2.

Ezekiel Gakunzi is Esther’s husband. A thin man with a steely gaze, he was caught in the same attack and got separated from Esther when they fled into the bush. “Some of our people were shot and killed,” he said, describing the experience. “But there was a place where other people fled, like a camp.” After being separated from Esther, Ezekiel ended up in Gatumba, on the border of DRC and Burundi, yet the violence only ended when they reached the border. The mai-mai harassed and killed the people he was fleeing with right up until they crossed over. “I had three children with me,” he said.

The violence experienced by the people in DRC and throughout Central Africa represents some of the worst excesses of human nature. According to human rights monitoring organizations, during the years of Esther and Ezekiel’s displacement, at least 2,500 civilians were murdered, 7,000 women sexually assaulted, and over one million people were displaced from their homes in North and East DRC. And in some instances, the mai-mai militias tortured and killed civilians in public rituals and ceremonies as a way to terrorize the local population.

While Ezekiel was able to make it to Burundi, Esther was not so lucky. “The reason why I was left out in the bush was that I was shot in the leg,” she recollected. The scars of her ordeal are still visible; as we talked, I could see the wound that ran from the bottom of her leg down to the top of her foot. “Some people saw me and helped me out of the bush.” Those same people eventually took her to a hospital where she stayed for almost one year, in 2010. “After I got better, I stayed with those people [who helped me] for another year in 2011. But then the war started again.”

While she was recovering, Esther had no idea where her husband was, or what the fate of her children had been. As hostilities escalated in the DRC, the family she was living with arranged for her to travel with some merchants to Kenya, who were accepting refugees at the time. When she got to the Kenyan capital, Nairobi, other refugees assisted her in finding a hospital that could tend to her injuries. “My foot was not healed, so I was taken to another hospital in Nairobi.”

During this time, Ezekiel was working on the border of Burundi as a farm hand with his three children. When he heard that refugees were also being received in Kenya, he saved up enough money to make the journey. “Because I was by myself, I decided that I should just go there and get help with my three kids, so I went.” Once in Kenya, he set about finding other refugees from DRC, describing the situation as not being dissimilar from living in Virginia. Making some casual hand gestures, he matter of factly said, “You hear so and so is here, so and so is over there… You talk to each other.” This method eventually led to him finding his wife Esther.

Much to my surprise, when I asked what it was like to find each other after such a harrowing experience, the entire room erupted in laughter. “It was just hard to believe,” said Ezekiel, a small grin forming on one side of his mouth. Our interpreter, Antoinette, took a moment to segue from the interview and explain the laughter, “You know, in our culture, we get happy but we don’t show it… We hug, but we don’t show excitement.”

Ezekiel and Esther were separated from October 2009 to March 2013 – almost four years. “Once we found each other, the church rented us a house in Nairobi,” said Ezekiel. From there, they started the process that eventually led them to the US. Ezekiel put this into motion by officially registering as refugees with the United Nations. “We went to the [UN] office; it took us three years from 2013.” Their family finally arrived in the US in October 2016. But according to Stephen Allen–the Site Manager for the International Rescue Committee, who assists refugee resettlement in Virginia–, the average time from displacement to resettlement for families arriving in the US can be up to 16 years. “The vetting process just to get to the US takes between two and three years alone, after registering as a refugee,” said Allen.

Being a refugee anywhere in the world, let alone in Virginia, is almost impossible to conceive. For those who have experienced the worst depravities of war and conflict, there is no motivation or ambition other than finding sanctuary. Only in America could the word “refugee” be corrupted as a means of instilling fear for political expediency. That lack of shared humanity and fellowship for those we perceive as “the other” has become a defining characteristic of our current political age. The story of Esther and Ezekiel is not unique–it is a story shared by almost 23 million refugees globally. It is one that connects the best and worst aspects of the human condition; the best of which can be found in a tiny patch of Henrico, where refugee families from Rwanda, Uganda, and Afghanistan have finally found sanctuary.