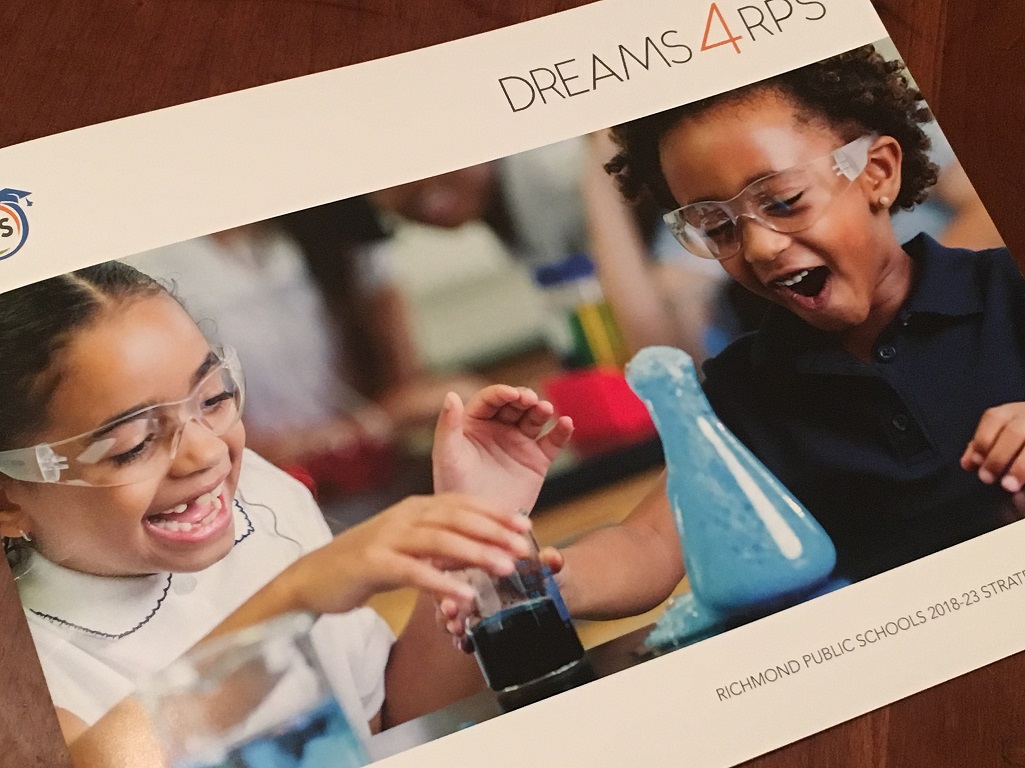 Richmond Public Schools Superintendent Jason Kamras delivered an optimistic message in his first State of the Schools address — even though the district has the worst graduation rate in Virginia and more than half of its schools lack accreditation.

“I wasn’t sure where to begin tonight because it’s been such a quiet year at RPS,” Kamras said Tuesday, laughing as a picture of a nearly two-foot-tall stack of newspapers showed on the stage’s screen. “How many times did we grace the front page? Well … there you go,” Kamras told more than 200 people in the auditorium of Martin Luther King Jr. Middle School.

“Perhaps most powerful of all, we renamed J.E.B. Stuart Elementary to Barack Obama Elementary,” Kamras said. “School names are just symbols, but symbols matter, especially when it comes to Richmond’s history, and present, on race.”

Despite the progress made, Kamras said the district still has work to do. Fewer than half of RPS schools are accredited, and Kamras said the city’s graduation rate is the lowest in Virginia.

“There is absolutely nothing broken about our students … We [the adults] are on the hook for those statistics, not them,” Kamras said.

Dreams 4 RPS is the five-year strategic plan born from 170 community meetings and input from over 3,000 participants. “This isn’t my plan. It’s not the board’s plan … It’s our plan because it reflects the hopes and dreams of everyone in the RPS family,” Kamras said.

The plan also explains the need for increased trauma-informed care. Kamras said 20 RPS students were shot and six were killed in the past 12 months. “Most teachers were never trained to help young people deal with those kinds of tragedies,” Kamras said. He said providing that kind of training is necessary for both student and staff support.

The fully implemented plan will cost $150 million over the next five years, which covers training programs, building improvements, school resources, salaries and more. Kamras said though RPS can and should act more wisely with finances, “We must continue to advocate for more.”

In December, RPS organized the March for More, and last month, the district participated in another march called Red for Ed. Kamras said continued pressure on the General Assembly is necessary to increase school funding.

With a strategic plan in place and problems to solve, Kamras is upbeat as he looks to the future.

“If I were to sum up the state of our schools in one word, I would say we are ‘rising,’” he said.  “We are rising together, and nothing can stop us.”