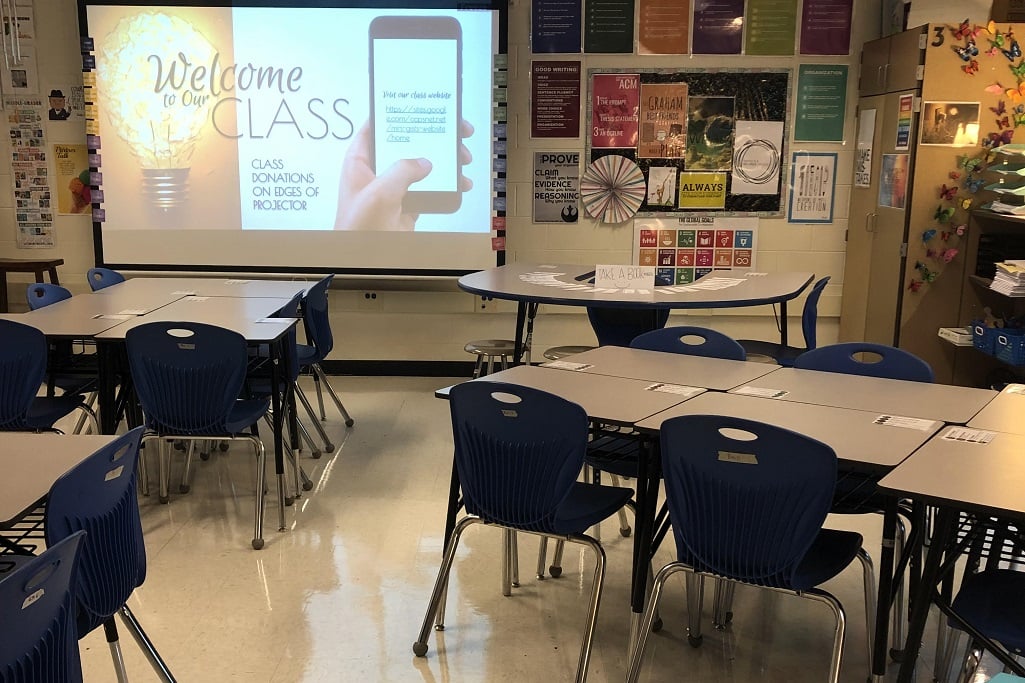 Three Chesterfield County educators weigh in on their unexpected spring, and how internet-facilitated remote education has played out in their lives so far.

After months of anticipation, the Chesterfield County School Board announced on July 20 that all public schools in Chesterfield County would be operating entirely via virtual learning for the foreseeable future. Throughout the four-hour televised School Board meeting, many questions were asked about health risks, benefits, and detriments of different learning plans; the mental and emotional wellbeing of students; and childcare concerns. However, there was very little discussion about the struggles of virtual learning and how to make it as effective as possible.

This spring, educators across the country were thrust into the digital world of teaching as the threat of COVID-19 ballooned. In Chesterfield, schools shut down on March 13 with the assumption that students would return in two weeks. Two weeks became a month, and a month turned into the remainder of the 2019-2020 academic year being conducted virtually. At all levels of K-12 education, teachers were unprepared for such an extended period of online instruction.

“When things shut down, we got a day to plan,” explained Marie Gist, an 8th grade English teacher at Midlothian Middle School. “So teachers in 24 hours had to come up with something totally different and feasible.”

On such a short timeline, educators did the best they could with what they had. Adapting their previous lesson plans to a virtual format, they turned to Canvas, Google Classroom, Flipgrid, and other online resources that were either provided by the district or free online to engage with their students without being in the same physical space. Mark Spewak, an English teacher at Midlothian High School, said he utilized multiple platforms to disseminate information.

“I have what I call ‘class slides,’ which is just a Google presentation that is shared with all of my students, so they can get information in two places, even though my slides are on Canvas as well,” he said. Spewak went on to say that he felt lucky to already be familiar with Canvas, an online teaching tool that allows educators to post readings, videos, assignments, and other materials fully online. He said that the professional development (PD) provided by the district was helpful, but not very advanced.

“Since last year, we have been receiving ongoing support for Canvas [from the district]. However, the professional development provided to us was always tailored to the needs of the teacher. In other words, if you were not great with technology but you wanted to figure out how to populate a class or something, those were the sessions that were available each time,” Spewak explained. “It happened to be that I had messed around with Canvas and done some recording before, so I was able to more or less choose my own adventure and find the tools that worked for me. I cannot say with any certainty that that was the case with other teachers who may have been at a more intermediate or even beginner level with Canvas.”

Gist expressed a similar sentiment and worried for other teachers who may not be as technologically inclined.

“I’m grateful that I’m tech savvy, so there are a lot of things that I feel confident in doing, but we have a lot of teachers that are not, or their course never really required it before,” she explained. “If I were a drama teacher or a music teacher, does it really matter to me that the kids have Chromebooks? Would I really care?”

Thompson, who has been teaching for more than thirty years, confessed that she struggled immensely with the transition to a virtual learning environment. For her, there was a steep learning curve because she had never been required to integrate technology into her classroom before.

“I’m not embarrassed to say that I need help with the technology. I definitely got thrown into it,” Thompson said. “We are lucky that we were given a whole lot of PD [Professional Development] quickly, which was great. We also have a technology integrator that was available to help, so that was good. Very stressful, but we were given those resources.”

In the end, each teacher made their digital classrooms as engaging and positive as they could given the circumstances. However, you can lead a horse to water, but you can’t make it drink. By the same token, since Chesterfield County announced that grades would not be taken for the remainder of the 2019-2020 academic year, students were under no obligation to participate in the classes provided to them last spring.

“I would say on average we probably had 25 out of the 39 students [participating online]. I think on a good day the best attendance I had was 32 out of 39, which I later found out was actually very high,” said Spewak of his high school English classes. “Once the decision was made that grades weren’t going to be counted for the rest of the year, it was much more difficult to keep things systematic.”

Both Thompson and Gist had similar experiences. In Thompson’s 4th grade class, she had about 15 of her 23 students come to each online meeting. Gist’s 8th grade English class had just two students who consistently attended.

“You couldn’t assign any new work,” Gist elaborated. “At a certain point in time we were allowed to introduce new content, but when half your kids aren’t showing up it’s like, who’s getting the new content and who isn’t? We couldn’t grade anything, so for students who are motivated by that, or at least see that and realize they have to do something, none of those things were in place either.” Yet Gist does sympathize with students who are now trying to balance their schoolwork and home life without any separation.

With the elimination of face-to-face interactions and few students with the ability or desire to continue their education on their own, educators turned to parents for help.

“I called parents and said, ‘I just want you to know, out of the five assignments this week, your child has only completed two,’ you know? I would email them, but I had one child that just didn’t show up. They came a couple times in March and I never saw them again,” lamented Thompson.  “Our hands were tied in the fact that we couldn’t grade it. It was optional if the parents weren’t going to push it and say, ‘It’s not optional for you. You need to complete it.’”

“I think it’s really really hard for students to have the intrinsic motivation to log in and start that process. It’s asking a lot,” explained Gist. She expressed the need for accountability on the part of both students and parents, which Spewak echoed, saying that interacting with students through more than just emails and videos is essential to building relationships.

“No matter what content you’re teaching, your relationships are the most important because that means that the students not only bought in, but they’re listening, and they’re also sharing their insights and making valuable connections,” Spewak said. “I think distance learning at its greatest is when I was able to offer an idea or a thought for them to consider and then share on and actually get a conversation going. That’s when it feels like education is really happening.”

Beyond attendance for the sake of education, consolidating student participation would improve teachers’ quality of life immensely. With the parameters they were given in the spring, educators were working night and day to make sure each student received as many resources as they needed.

“I think initially there was no balance,” said Gist. “I have always had my email and Canvas apps on my phone, because if a student does have a question and I am available, I like to be able to answer it. But I needed time to not check my email, or not worry about a notification.”

Gist said that she was fortunate to have a dedicated work space in her home from which to conduct her classes. Thompson said she had a similar setup, but that didn’t stop her from being constantly connected.

“I feel like last spring, I was connected to my computer 24/7 because I wanted to be there for my kids whenever they needed me. I called all my parents on my cell phone. I didn’t care that they had my number. Text me, whatever. I did that for my parents and my kids because none of us has ever been through this before,” said Thompson. “Next year, I think I’d have to set some boundaries.”

As educators move forward with plans to teach virtually for the 2020-2021 academic year, their overwhelming concern is ensuring student engagement and the formation of strong relationships between teachers and students.

“You would have to have smaller groups of kids. It’s just too difficult with a class of 25. It’s hard to keep them all interested and engaged and motivated because they’re in a different surrounding,” said Thompson. “You would have to spend a whole lot of time teaching them how to sit in front of that computer and what the rules are going to be before any curriculum could be taught.”

“If we are going to be relying more on [digital] tools, I think we also need to be focusing more on the social emotional part of teaching and reaching the students. I think content is going to take a backseat to that very important collaboration and cooperation and self-monitoring piece,” said Spewak. “We are making citizens here, not just students. We are showing that we are a community. We’re not just robotically trying to shove people on to graduation. We’re trying to develop people into what they will become as adults.”

Emilia is a data journalist and designer who splits her time between Richmond, VA and Providence, RI, where she is a senior at Brown University. She loves to tell stories of all kinds and is always excited by new projects and endeavors. See more info at tinyurl.com/emr-website or find her on twitter @EmiliaRuzicka.

Last year's move to campus closures, quarantines, and distance learning was necessary to minimize the spread of COVID, but had a negative... READ MORE

PopUp Market at The Diamond Will Run Through July

Every Saturday at the home of the Flying Squirrels, local businesses set up in the parking lot for The PopUp Market at the Diamond: a... READ MORE

Last year's move to campus closures, quarantines, and distance learning was necessary to minimize the spread of COVID, but had a negative... READ MORE

PopUp Market at The Diamond Will Run Through July

Every Saturday at the home of the Flying Squirrels, local businesses set up in the parking lot for The PopUp Market at the Diamond: a... READ MORE