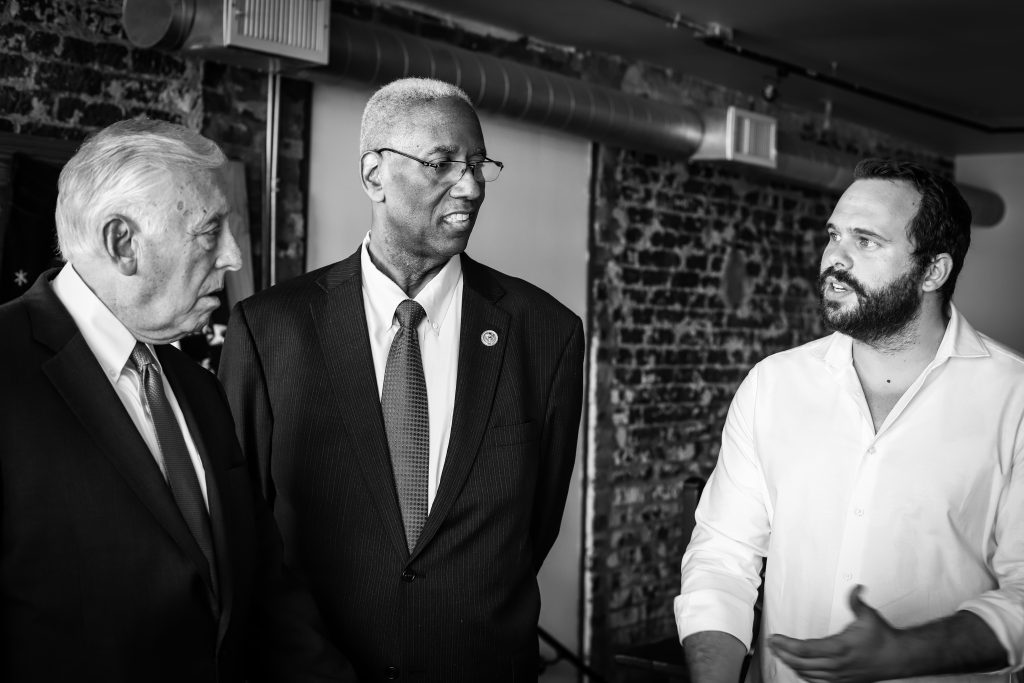 Congressman Donald McEachin and House Democratic Whip Steny H. Hoyer toured Shockoe Antelier (Shockoe) in Richmond earlier today. The visit, part of  Hoyer’s Make it in America tour, has been focusing on job creation, entrepreneurship, and how government can help grow and support small businesses: which makes Shockoe Atelier a great local establishment for a fact-finding mission. One of Richmond’s premier establishments for denim couture, the business has a back-story that is uniquely American, being founded by immigrants from Romania and France.

Shockoe is a unique spot for fashion in the River City, as their denim is handmade in a workshop attached to their showroom. Touring the workshop floor, the Congressmen eagerly listened to stories from owners Anthony, Pierre, and Brigitte Lupesco along with their operations director, Robert Nolley. Along with chatting to workshop employees, the Congressmen took in Shockoe’s process, learning how their denim is sourced, supply chain issues, and how their business has grown in the 21st Century economy.

Sitting down for a roundtable after the tour, the Congressmen congratulated Shockoe on their success. McEachin opened the roundtable by saying it was time Congress did some nation building at home, and that “we need to create more well paying jobs that grow the Middle Class.” He also said that policymakers needed to create economic conditions that allowed companies like Shockoe to be competitive and thrive.

“American small businesses can out-compete anyone in the world, they just need a level playing field,” said McEachin, before saying that Congress has missed opportunities to help small businesses gain access to capitol. “I believe we can change that in the next congress, that’s why we’re here. We want to hear the challenges you are facing…and take those insights across the country.”

Hoyer who was in town stumping for 7th District Democratic Candidate for Congress, Abigail Spanberger, spoke next after an introduction from McEachin. Observing the minimalist and stylish interior of Shockoe, Hoyer noted that it was refreshing to be in a place that wasn’t overly pretentious.

“Normally, I come into these fancy buildings and everything is brand new, but that is not how 90 percent of businesses start,” going on to say, “what you’ve done is taken an old place, and made it vibrant and new.”

He was quick to articulate that the U.S. needs to make sure jobs are available to make quality American goods that people around the world want to buy.

“We’re five percent of the world’s market, but 95 percent of the market is outside our borders,” he said. Addressing this challenge, he said his Make it in America agenda focuses on three interdependent issues: skills training, entrepreneurship, and infrastructure, and that the name of this program was a play on words; moving away from the old idiom “made in America,” as a way to better reflect the goals of small businesses succeeding in 2018.

Given the immigration story of Shockoe, Hoyer spoke extensively about the immigration experience in the U.S. and how it has always been a positive force in the American economy. Referencing The New Colossus poem on the Statue of Liberty —  which reads — “Give me your tired, your poor, your huddled masses…the wretched refuse of your teeming shore,” — Hoyer said, “She was dead flat wrong. We didn’t get the wretched refuse, we got some of the most entrepreneurial, courageous, risk taking, and ambitious people in the world.” Looking at Pierre and Brigitte, he said, “You two are two of those people.”

“I love your slogan, made in America by immigrants.”

Asked “Why denim?” by McEachin, Anthony said it was about legacy and taking his parent’s legacy and making it American.

“There is not much more of an iconic American product than a pair of jeans,” he said. Building on this, Brigitte pointed out that moving to the U.S. gave their family more options than staying in her native France, where the opportunities to engage in fashion design were predicated exclusively on who you knew (as opposed to the quality of your product).

As the roundtable ended, both Congressmen were interested to learn that the majority of their business was done online, with Shockoe’s primary fashion markets being located in places like New York, Los Angeles, U.K. and Europe.

“We got a lot of support from the Richmond community,” said Anthony, when Hoyer asked about how they connected to capitol to grow their brand. “We don’t have a fabric source in the U.S. anymore,” he said, highlighting that their main supplier went out of business. “So all of our fabric is imported from Italy or Japan.”

Acknowledging these challenges, especially with finding quality denims, Anthony said there is a still a fair amount of boot-strapping with a scrappy fashion brand like theirs — which is precisely why the House Democratic Whip and Congressman McEachin showed up at their shop in the River City this morning.