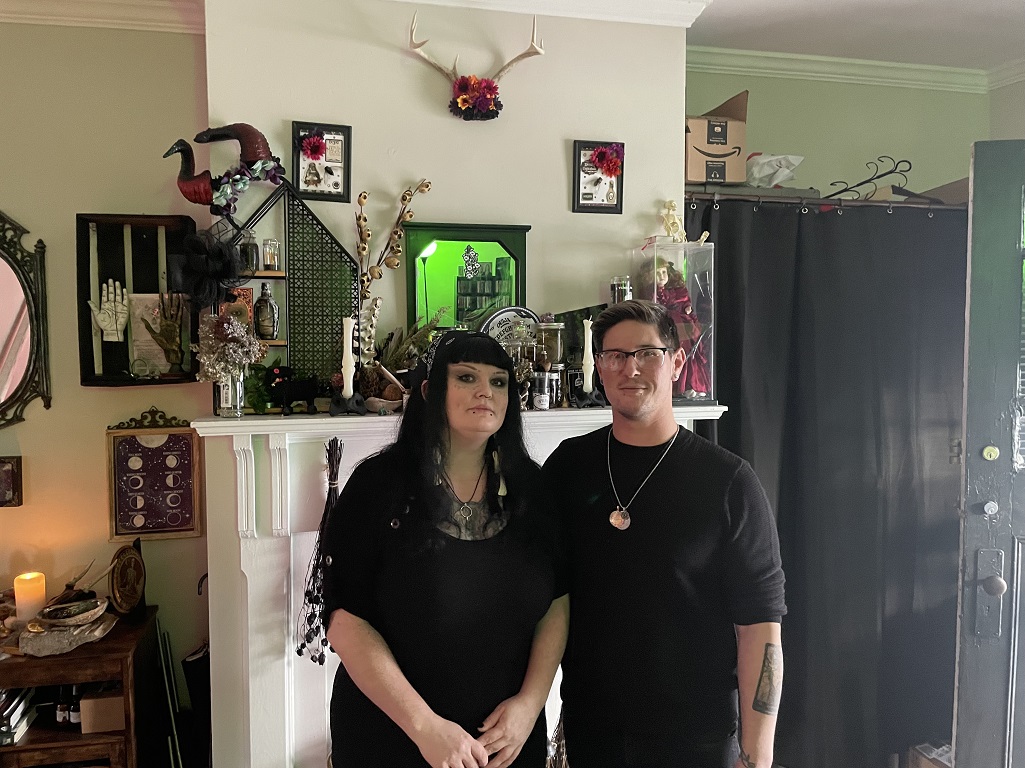 Coven In the Community

From witch-themed markets to workshops, tea parties, and more, River City Witches are getting a lot done in the Richmond community — and working to improve community perceptions of witches while they’re at it.

When you think of a witch, you may think of spells, black cats, and communing with the spirits around you. If so, you’re partly correct. But being a real-life witch can be far more complicated than that, involving identities and practices that mix magic with the practicality of everyday life. “Witch” is a catch-all term for dozens of different practices and focuses, getting more and more specific as you go down the rabbit hole.

Witches have received more and more attention in the last decade, much of it placing witchcraft into a newly positive light. In many places, though, it can still be difficult to find like-minded individuals. Luckily, Richmond’s population of witches from all paths and walks of life is ever-expanding. This is, in part, thanks to the work of River City Witches.

Four years ago, safe spaces for Richmonders who found themselves drawn to witchcraft were almost nonexistent. If you wanted to find a place to speak with other witches, you would most likely have to seek it out on the internet. Misty Van Cleave saw this as a problem, one she wanted to solve. On a whim, she went to her friends at Fallout RVA in Shockoe Bottom to see if she could host a market for witches in their space. They allowed her to do so, and to her surprise, it blew up, with an estimated 1300 people in attendance on that hot July afternoon.

“I didn’t know we had such a large community,” she said. “People lined up around Fallout to get inside. It was ridiculous.” After witnessing how much of an impact she could have, Misty set out to find more opportunities to bring people together around their love of witchcraft. Thus, with the help of others including her friend and co-founder David James, River City Witches was born.

Soon after that first market, River City Witches was hosting a variety of other events, from workshops to tea parties. These were positively received by the local community, and an increasing number of people gravitated towards the markets – and, in turn, to each other. Richmond’s witchcraft community was coming together as a cohesive unit, expanding and learning from each other as River City Witches grew.

The group’s frequent markets have had a clear impact on the community of small businesses that have taken part. Dozens of vendors from all across Virginia, along with several from surrounding states, come to the markets that River City Witches hold throughout the year. During the markets, the parking lot and events room at Diversity Richmond are packed with different witch-based stalls, offering tarot readings, wands, herbs, and anything else that a witch could want.

A market for witches may sound like an adult affair, but the reality of it is the whole family can have a good time at a River City Witches event, whether they’re spiritual or not. The open, inviting atmosphere is obvious to both attendees and vendors. Jayne Geist, a local witch who owns Black Ankh Designs, is a frequent vendor at these markets. She sees a constant stream of people, both newcomers and regulars, who visit her stall at these markets, helping her connect and form relationships she never would have had before.

“I have seen a lot of young people with their parents at the markets,” Geist said. “So River City Witches has also created a place where families can share their interests and learn about witchcraft without the influence of negative stigmas.”

Stigma is something that River City Witches is familiar with. The presence of freely roaming witches has not been accepted by everyone. During their very first market, Van Cleave and James say there were protesters outside of Fallout RVA. There have been other instances of their markets and pop-up shops encountering pushback from members of the public as well.

“Of course, we’re not for everyone,” said James with a laugh. “But at this point in our lives, we’re pretty used to it.”

Van Cleave and James both began their practices as witches early on in their lives, and have developed their craft over many years. They are still constantly working to improve and learn more about the natural world around them, but through very different methods. Van Cleave focuses her energy on necromancy — communication with the spirits of the dead — and green witchery, which bases itself around plants, herbs and the natural world. James focuses on the natural world as well, but he specifically calls himself a poison witch. Their religious paths are also vastly different, Van Cleave subscribing to the belief system of the Church of Satan and James being a devout pagan.

“It’s very interesting,” James said. “We work so well as founders and for our classes and things of that nature, but we’re completely different.”

Thanks to these two individuals, River City Witches has made steady progress throughout its four years of operation. They don’t plan to slow down either, constantly planning for the future and working to ensure that there will always be a space for witches in Richmond. Their markets exist not only to create space in the moment for witches to get out of the “broom closet,” but to create connections that will continue long after the stalls are taken down and the workshop has finished its sessions. The community thrives, and River City Witches breathes and grows as if it is a living being.

“It’s its own entity at this point,” Van Cleave said. “When you stand back and look at it, it’s everyone. We’re all just one, and it’s amazing.”

The next River City Witches market is the Spring Equinox Market. It will take place at Diversity Richmond, located at 1407 Sherwood Ave, from 1 to 6 pm on Saturday, March 13. Admission is free.