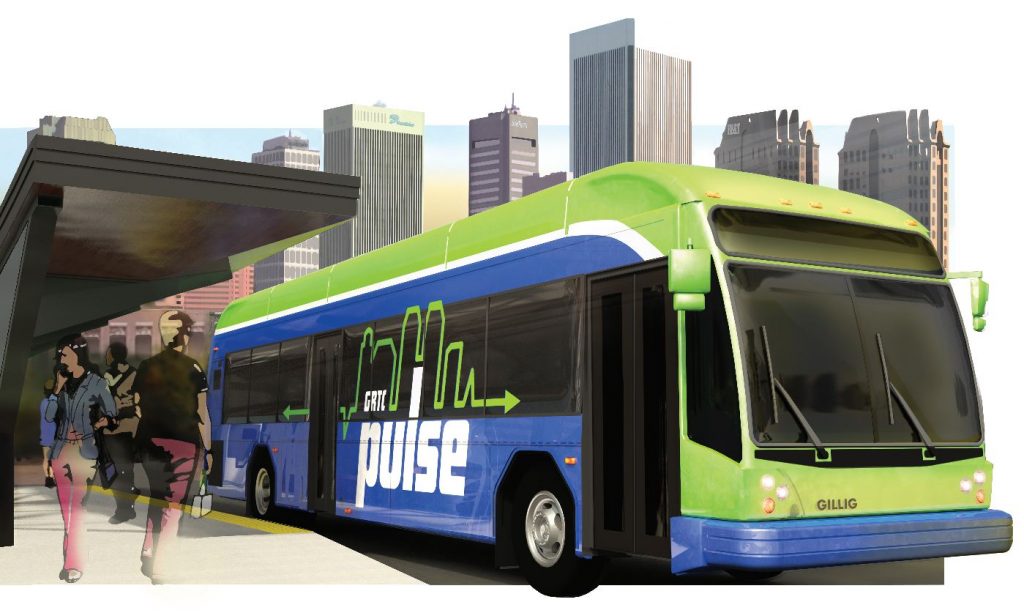 Meet the newest, most exciting form of public transportation in 2016: the bus.

Meet the newest, most exciting form of public transportation in 2016: the bus.

Well, not just any bus. GRTC is in the earliest stages of building a bus rapid transit (BRT) line called The Pulse, and it hopes the line will be the first part in the transformation of Richmond’s public transit system when it opens in the fall of 2017.

BRT is a relatively new form of transit, think more of a light rail than your standard city bus. Of course it doesn’t have track and still moves alongside other traffic, but certain features allow it to emulate the continuous flow of a rail service.

“It is a new type of transportation in Central Virginia, we haven’t had anything remotely like this since the streetcar trolley system in 1949,” said Carrie Rose Pace, Director of Communications for GRTC. “It’s a faster, more frequent service. It acts a lot like light rail in that it stops less often and it utilizes dedicated lanes for a portion of the route.”

The line will span 7.6 miles from Willow Lawn along West Broad Street, turning down 14th street to Main Street and going east on Main to Rocketts Landing, where it will terminate. Buses will run every 10 minutes during peak hours (7:00 AM to 9:00 AM and 4:00 PM to 6:00 PM) and every 15 minutes all other times. The system will operate from 5:30 AM to 11:30 PM on weekdays and 6:00 AM to 11:30 PM on weekends, and GRTC’s estimates say it will take about 30 minutes to get from one end of the line to other, down from about an hour with the current system.

“This corridor is ripe for help from a recovery standpoint, economic development, revitalization, to new development. The history of broad street has had its ups and downs but we’re already on the cusp of an up,” Rose Pace said. “… Improving transit has been proven by the federal government and other cities that had similar projects to lead to revitalization.”

Going West from Willow Lawn to I-195, the bus will run like a typical GRTC bus, mixing with traffic and stopping at a curbside stop at Staples Mill Rd. But after 1-195, the bus will move to a dedicated bus-only median lane, making five stops at median platforms before moving to a dedicated curbside lane for three stops Downtown. After a brief run on 14th it’ll head east for four more stops between Main Street Station and Orleans Street.

The Pulse will have priority at many traffic lights as well, using technology on the top of the bus that can communicate with traffic signals to stop the intersection momentarily and allow the bus to proceed.

Dedicated lanes and signal-priority aren’t the only time-saving mechanisms The Pulse aims to employ. At the station, everything has been reworked to limit the amount of time the bus sits idle while getting people on and off. 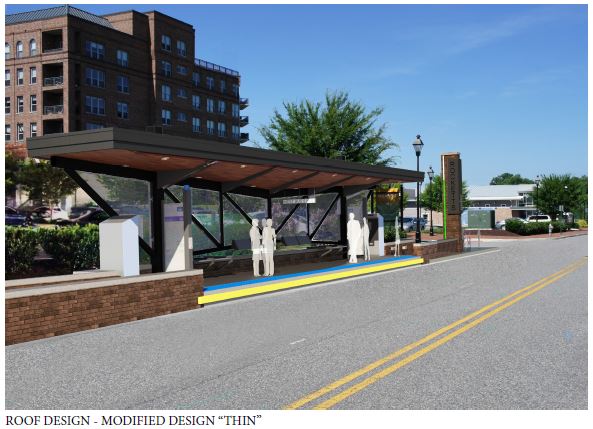 For starters, the station’s will have an elevated platform, lining up with the bus floor so that people don’t have to climb stairs to get on on descend to get off. In addition, fares, estimated to be the same as current bus fares at $1.50 a ride, will be paid at kiosks at the station, so passengers can board in the front or the back, eliminating the queuing that happens at the front of the bus during busy hours.

Finally, the stations will be built right alongside the lanes the bus will travel in, meaning that the bus won’t have to pull into a parking lane to pick up passengers and then wait for traffic before pulling back out into the road.

Oh, and the stations will be legitimate stations as opposed to street signs in the sidewalk. They’ll provide shelter and shade, come equipped with benches and bike racks, system information and the waiting time until the next bus. They’ll even have space for public art.

The 40-foot “BRT Plus” model, made by California-based Gillig, will run on compressed natural gas, like much of GRTC’s current fleet. The busses will have space on the front for three bikes and will come equipped with on-board wifi.

When VDOT first sought construction bids, it estimated the cost would be about $35.8 million. The Lane Construction Corporation won the contract with the lowest price tag of the bids that came in at about $47.8 million. Lane has built other similar projects, like the new BRT Metroway system in Alexandria.

Part of the deal in getting the project funded was that the state would cover any cost overruns after the estimate, so as of right now the state’s contribution stands at roughly $29 million, the U.S. Department of Transportation is providing about $25 million in the form of a TIGER grant (a special infrastructure grant stemming from the 2009 stimulus package) the city won.

“What the federal government saw is that in other cities like ours with similar situations where there’s been a movement away from this corridor and there’s been some loss of life and vitality that this is the kind of injection that can really lead to help to come back,” Rose Pace said. “It’s almost like giving a garden fertilizer. You already have the plants, you already have the grounds, you already have some ingredients but you need something extra to help give it that jolt.”

Richmond’s contribution will remain at $7.6 million and Henrico County is chipping in about $400,00 for the station across the county line at Willow Lawn.

The Implications for the entire system

With the BRT expected to begin operating in the fall of 2017, the city is taking the opportunity to rethink the entire bus system, something it hasn’t done in decades. The city, GRTC (which is a private corporation funded by the city and counties) and a team of consultants are conduction the Richmond Transit Network Plan and have developed three different concepts for what the system should look like when the BRT comes on line.

One concept values high frequency, with fewer total lines running more frequently in the most heavily-used corridors. Another prioritizes coverage, with more lines reaching more areas but at a lower frequency. The final concept keeps things largely the same with tweaks for efficiency.

Public meetings will be held over the next two weeks to get input from the community on what riders value.

Physical construction of the stations won’t begin until this fall, but crews from Lane have been conducting brief soil tests along the route. That kind of scope work will continue until August, after which the construction will begin. As of right now, things are on track for the fall opening, and the contract includes incentives for the on-time completion of the project, but this is Richmond, so one can never be sure.