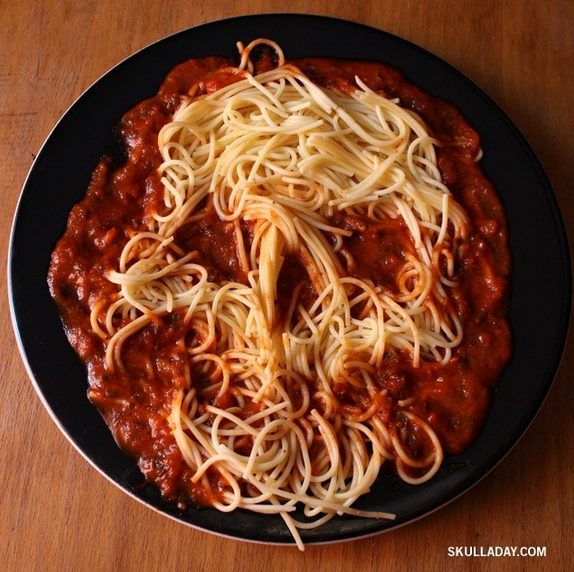 Scalin’s idea of starting a project of making a skull every day for a year started in 2007.

Hitting a point in his career where he was no longer inspired to make art put him into a position that no artist ever wants to be in.

So, he came up with the idea to make something every day, hoping to “reignite [his] love for creativity and making art,.” The idea to make specifically ‘skulls’ every day was kind of an idea that came out of thin air.

“I didn’t think really hard about it, and so I just thought ‘oh skulls, I like skulls’. It was the most arbitrary thing… At the time I started the project, I already had a few skull tattoos, and as a kid I liked them,” said Scalin. “Skulls have always been something I’ve liked, so at the time of the project that’s just what I thought of, ‘I could spend every day with a skull and not hate that experience.’”

Although the idea of this project was “arbitrary”, the product from the year-long skull journey is far from it. “Of anything I could have chosen, what’s interesting about skulls is that they’re meaningful to everyone, everywhere. There are very few images you can show somebody, and regardless of language, religion, age, that they’re going to have an actual response,” said Scalin.

He started to make connections with people all over the world who were interested in his project for different reasons. He has spoken at colleges, businesses, and even was invited to speak at the Mutter Museum in Philadelphia, Pennsylvania, a place which already enthralled Scalin’s interest because of the museum’s collection of medical oddities (skulls included!).

The image of a skull means something to every person who sees it, especially considering that everybody has one.

Since the conception of this project, Scalin’s skulls have contributed to the large trend of popularity that skulls around the world. He posted on a blog every day for a year, and not long after its first few posts, other people wanted to share their skull creations with him and the world as well.

In the year after his project, Scalin created “Skull A Day 2.0” where he shared pictures of other peoples’ creations. This blog is now in its eighth year, or “Skull A Day 8.0,” and People are still voraciously sharing their art here as well as on all other edifices of social media.

Because of its wide popularity on the internet, it can be hard to go back, find, and sort through all of Scalin’s original images, which is part of what inspired him to put it in book form where you can easily hold in your hands and experience his journey in full.

Originally, Chop Suey came into play by selling Scalin’s first book, Skulls, containing less than the first half of his yearlong project of creating skulls.

“The [new] book [idea] came about because we had been selling Skulls the book,” said Tefft.

Because Scalin’s project became so popular where he had been sharing it in blog form on the internet, people begged him to publish a book about it. Of course, once the book Skulls was being sold it flew off the shelves until it went out of publication. “They stopped printing it, and it was a shame because people were asking us for it,” Tefft continued.

“I think probably two or three years ago I extended to Noah, like ‘hey, if you ever want to do something [new], I’ll put time and money behind it.’” So, when Scalin came to Tefft with the idea of a book completing focusing on his 365 days of skulls, Tefft enthusiastically offered not only to sell it in his store, but to publish it and wholesale it as well.

Since the store is stepping up to go beyond just selling books and venturing into the publishing world for the first time, this is the chance for Richmond locals and supporters of local business to directly support an original project borne directly out of the community itself.

If skulls, local business, books and bookstores, and the art of Noah Scalin interest you in any way, please go to their kickstarter page to support them before the June 30th deadline!!