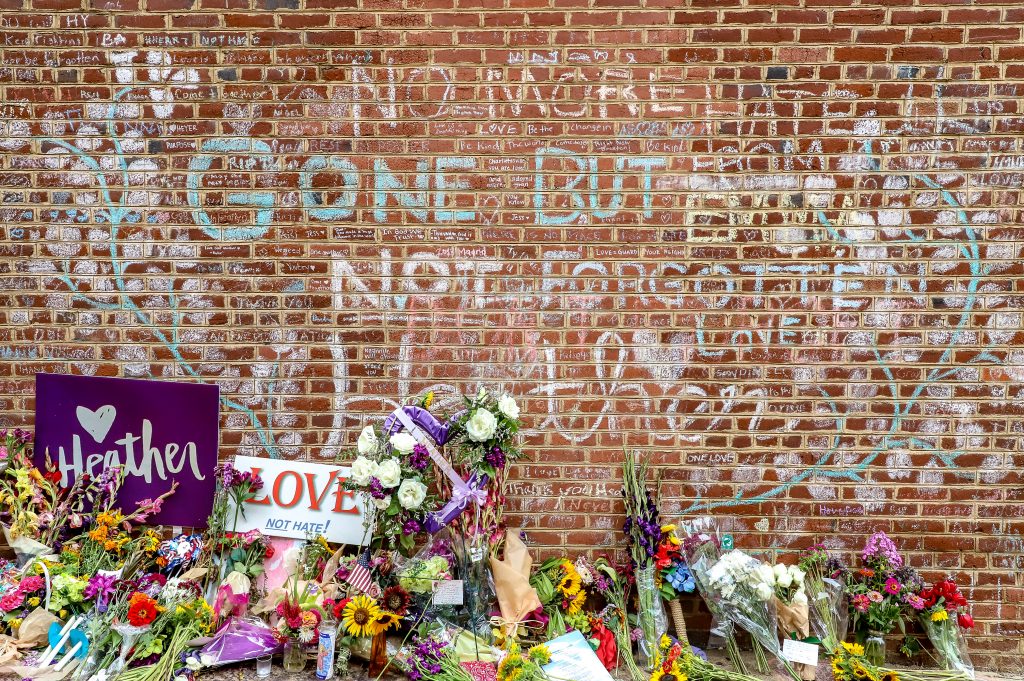 A year after Unite the Right, residents of Charlottesville took to the downtown mall to shop, eat lunch, and mourn the loss of Heather Heyer, a counter-protester killed by James Alex Fields, Jr., at the alt-right rally.

Mandatory bag searches, described as “consensual” in a press release on the city website, were strictly enforced for people entering the downtown mall. Hundreds of state and local police marched through and around the mall, as helicopters flew low overhead. Within the cordon, city residents, business owners, journalists, and police ate lunch, took photos, and walked freely. Both outside and within the cordon, members of the clergy, Democratic Socialists, and anti-fascist demonstrators marched and protested both the hate groups from last year and, in many cases, the overwhelming police presence.

Early in the day, two young parents were walking the mall with their toddler, near one of the checkpoints. They didn’t want their names used, but were happy to talk. When asked if they were scared, the mother said, “Do we look nervous?”

“We live here,” her husband added. “I’m just happy to see everybody out, peaceful. This is what Charlottesville is.”

Just down the block, Abigail Jefferson said she was downtown for an annual family reunion. “I’m from here, we hold our reunion every year,” she said, but the security impacted their event. “It’s been tough to get around. It’s been changed this year. Half my family can’t make it.” She said it was sad, but they might have to change their plans for next year if this would be an annual event.

Maxicelia and Troy Robinson, owners of Order Up! Mobile Food Cart, felt comforted by the security. “The atmosphere was really apprehensive,” Maxicelia said, but, “The police presence is really reassuring.”

Troy interjected, “We have three kids in college–that’s what’s scary.” While business was down this weekend, they’d seen regular customers, and were happy to be on the mall.

Nearby, RVA Mag ran into Vonzz Long, a friend of DeAndre Harris, the black man assaulted by white supremacists last year, said he wasn’t nervous. “I’m just trying to get something to eat today. Nothing’s going down,” he said.

Asked about the police presence, a source of contention for some anti-fascists on the other side of the cordon, he said, “It’s perfect. They should’ve done this shit last year. They shouldn’t call it an anniversary, though, it was a tragedy. That’s what’s making me feel weirded out.” He agreed to a photo with his friend, who went by “Young Hef,” before they went on their way.

At Fourth Street, where Fields took Heyer’s life and injured some 30 others, the ongoing memorial to the woman had grown. A local woman who introduced herself as “Lexx, with two x’s,” was adding to the display with a Bible quote about love. She was with an unnamed friend, visiting from Georgia. “Today, I’m here to spend time with the people I love. A lot of hate has been spread,” she said. She wasn’t scared to be on the mall, but her friend said she had been before they arrived.

“That’s why I brought you here,” Lexx told her. “What happened last year, that’s not who Charlottesville is.”

On the east end of the mall, restaurants and retail shops were closed–except for Ike’s Underground. The proprietor, James “Ike” Eichling, had a hand-scrawled sign out front in support of journalists. “It’s the first time I put out a sign that made a statement,” he told me. “I just wanted to say I support the First Amendment and the people who keep us informed.”

He was in good spirits, though. “The police presence is an overreaction, it’s justified, but it’s also a display of guilt over last year’s inaction,” he said. “I was a little upset by the message from someone in authority, the city maybe, to not go downtown for the weekend.” Mostly, he said he was just “pleased to see laid-back people walking, enjoying the town. Their very presence is a declaration that this is what our town is.”

On the west end of the downtown mall, at the Omni Hotel, a very different group was in town. The Miniature Book Society had selected Charlottesville as a place to host their annual conference, where members get together to swap books and talk about their passion.

This year’s co-host, Molly Schwartzburg, the curator in special collections at the University of Virginia, said the event had been planned before last August by Rick Hill, who she said “Did all the real work.” Schwartzburg gave the group credit for not cancelling their plans. “Over one hundred members came, our biggest turn-out ever despite all this,” she said. While it was harder to get around today, tours and events had gone as planned for their members, who have come from as far away as Japan. “Between Jefferson, our library at UVA, and our tour of Caroline Brandt’s collection, there’s just so much here,” she said. “And I’ve made sure to send people of the hotel to enjoy the city. Charlottesville is a great city for book lovers.”

While a few misdemeanor arrests were reported by Virginia State Police, I only saw one; that of a man identified by Twitter users as John Miska, a Charlottesville resident known for pro-Confederate activism. Miska was detained not for his handguns, but for a package of razors he’d purchased at CVS, along with two flats of Arizona Iced Tea. Anti-Confederate activist Goad Gatsby also witnessed the arrest. “How am I? I don’t know, I just saw a man escorted out yelling, “I made a legal purchase at the drugstore.” This whole day is just traumatizing for so many of us.”

John Donegan contributed to this report. Cover photo by Landon Shroder; other photos David Streever or Shroder as indicated.