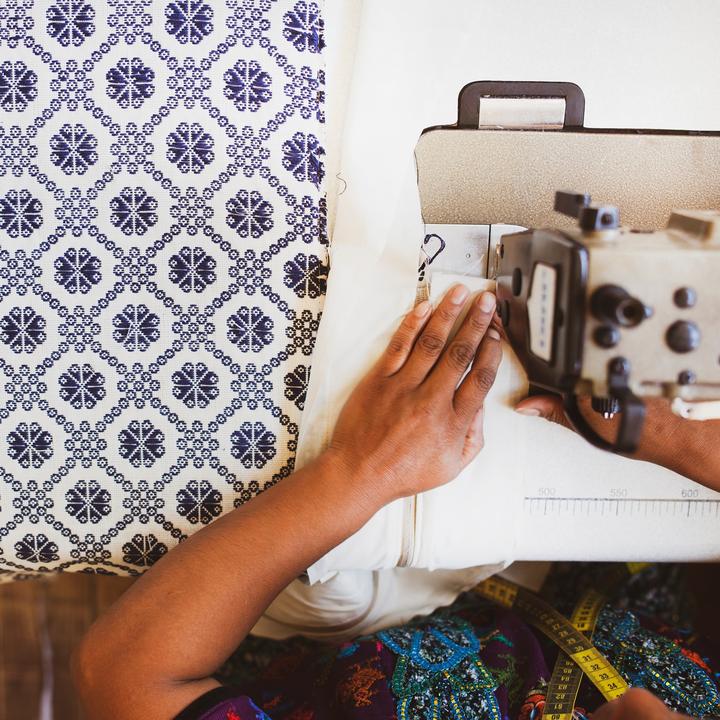 How often do we know the origins of the products we buy? At AlterNatives Boutique, the answer is every time. We caught up with owner Guadalupe Ramirez as she embarks on her 25th year in Carytown.

The story of AlterNatives Boutique begins and ends with one idea: if you give someone the opportunity for education and the access to possibility, they will be empowered to help themselves.

Guadalupe Ramirez, owner of the Carytown boutique, remembers tagging along with her parents and grandparents as a child in Guatemala. They attended community meetings for their family’s cooperative in the small village of Tejutla, located in the Western Highlands.

Ramirez’s family worked to help locals during the devastation of the Guatemalan Civil War. Their involvement would eventually inspire Ramirez when she opened her ethically-sourced boutique: a person of color helping other people of color to aid their communities.

“[It’s important to] not just have the complex of a white savior,” Ramirez said, “but to also learn a little bit more that as people from the area, who understand more of these struggles — we can have a better impact.”

Ramirez believes in the importance of knowing the origins of the products you buy. Often, she says, ignorance is the reason that the overwhelming majority of consumers don’t know or care if they buy from unethical sources. AlterNatives seeks to combat that. With fair trade jewelry, clothing, and home decor, the store’s products are transparently produced, and their creators are paid fairly.

“Many times, we make poor choices not because we want to… but because we don’t know exactly what’s happening,” Ramirez said. “My mission is to communicate and educate about how those items are made. The person who made the item has a biography; they have wishes and energy that they put into the items.”

The marketplace is sacred to Ramirez, she noted, for exchanging energy between the creators of her products and the people who buy them.

Ramirez’s interest in social work was fostered by the peasant’s movement in Guatemala. It was revolutionary, but not for the reasons the Guatemalan army believed. According to Ramirez, instead of the communist group the army thought they were targeting, the movement was a cooperative of highland farmers joining forces. They wanted better crop pricing, and to be educated by a group of Belgian nuns.

“My parents organized in order to find good prices for the crops,” Ramirez said. “It was the help of some nuns from Belgium that gave them the opportunity to learn bookkeeping, organizational, and business skills to put together this cooperative. Between meetings my parents’ trainings around different communities, I was along, trying to be quiet and entertain myself.”

Ramirez’s family was targeted by the military, resulting in the death of her uncle and threats to her father.

Despite her family’s cooperative being decidedly pro-market and pro-business, Ramirez believes the army’s persecution became a sad example of harm done by a lack of education and fear of the unknown.

“In reality, for us and for my town where I come from, we were looking for better prices for goods [and pooled resources],” Ramirez said. “You pay what you can, and support this movement.”

When she was 16, Ramirez left her hometown to continue her education with a teaching diploma. By the age of 18, she was teaching a second-grade class to send money to family in her hometown, struggling after her father was forced into hiding. Her attempt to study sociology at the University of San Carlos ended abruptly when the army targeted the department, kidnapping and possibly killing some of their faculty.

“When we came back to the university to do our report, the humanities faculty was taken over by the Guatemalan Army,” Ramirez said. “They said ‘One more step on this school and you’ll be killed.’ Everyone left that night for good.”

Ramirez continued her work following in her family’s footsteps, working with marginalized groups in the wake of Guatemala’s devastating civil war. She aided orphans in the Guatemalan jungle, widows of political violence in a small Mayan town, and children of plantation workers by teaching them while their parents fought for rights in the capital.

In the face of tragedy, Ramirez’s upbringing in a small peasant town has taught her resilience and resolve to help others. These traits have helped her guide AlterNatives through a 2007 fire, the Great Recession in 2008, and now through COVID-19 harming small businesses.

“[This resilience] is about always learning to adapt to the next challenge, and become stronger than before,” Ramirez said. “We need the opportunity to learn things… and adjust to the market again. We need variety. Then there will be more creativity.”

Ramirez’s husband, Ben Blevins, traveled to Guatemala as a human rights observer after his graduation from the University of Richmond. The couple decided to settle in Richmond, and eventually she became a licensed peddler to sell cloth woven in Guatemala by women who needed funds to recover from an unsuccessful potato farming business.

“The concept that only white people can help brown people is not really the truth,” Ramirez said. “That was my understanding. thought, ‘Why can’t I help my own people? Why does it have to be a white person to save a brown person?”

After years of selling handmade items on the streets of Carytown and in front of Plan 9 Records, Ramirez was able to rent her first storefront. The brick-and-mortar location for AlterNatives was born. Located at 3320 West Cary St., the building called to Ramirez with a mural of a jungle while she was still peddling her fair trade cloth and jewelry.

While Ramirez said the streets of Richmond were generally welcoming, she did experience racism and distrust from many of her original patrons as a peddler. She was often asked about the percentage of sales going back to the women producing the items, and some customers seemed wary of her helping other people of color.

Despite those instances of racism, Ramirez thinks Richmond — and especially Carytown — has an open-mindedness that helped AlterNatives survive through many challenges in its 25 years. Her husband often jokes about Ramirez being a hippie at heart. She thinks her nature of love and understanding is the reason AlterNatives will continue to thrive.

“We are excited,” Ramirez said. “We are getting ready for a new chapter in our lives.”

Jamie McEachin is a junior at James Madison University where she’s majoring in media arts and design with a concentration in journalism, and minoring in political communications. Jamie believes that knowledge is power, and she wants to empower readers with the stories she writes. She loves any excuse to add to her plant collection.