Inside the General Assembly with a Legislative Assistant - RVA Mag 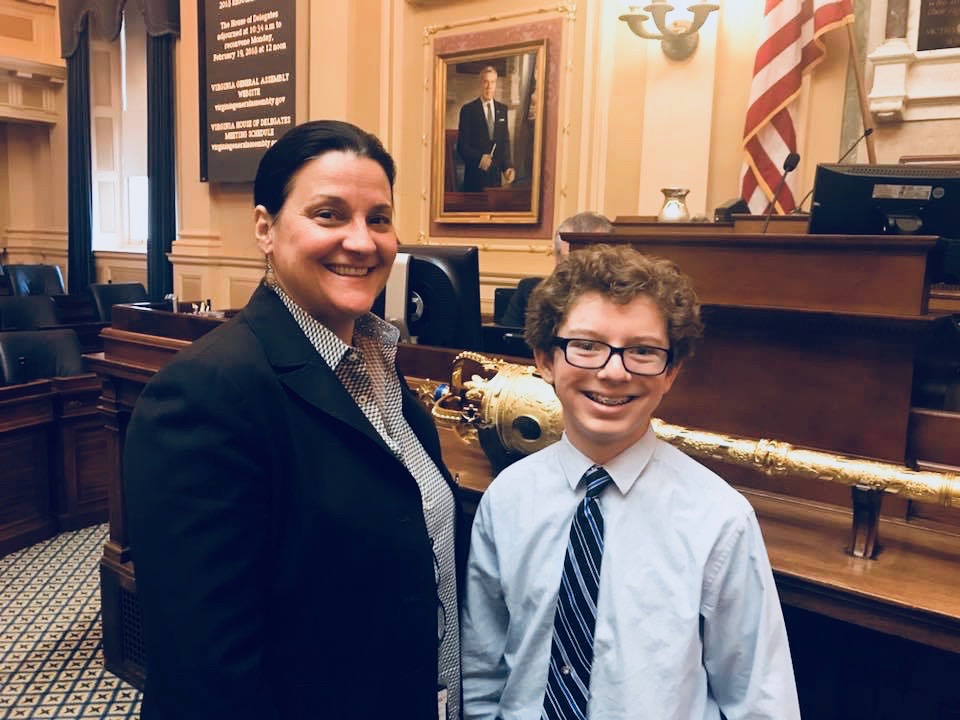 Last Friday, I had the experience of a lifetime. I visited the Virginia General Assembly as a legislative assistant for Del. Dawn Adams of the 68th District, working with her assistant –  Maureen Hains. I first met Adams during a phone interview last year, which actually ended up becoming an article for RVA Mag. A few weeks later, she won her delegate seat and my family was invited to the swearing-in ceremony. After the main event, she talked to me about the Legislative Aide for a Day program.

I was intrigued, so of course, I said yes. After pages of forms, I was finally ready to skip school last Friday so I could work at the Capitol during the morning session. Right away, I was put right to work – starting with converting the long list of sign-ins from the guest book to an excel spreadsheet. This was interesting but tedious. As you can imagine, it was extremely difficult to read some people’s handwriting, abbreviations, smudges, and messy cursive. On the other hand, it was cool to learn how delegates in the General Assembly actually care about their constituents and visitors; enough to spend hours writing thank you’s and messages to the people.

I can’t think of any other political office that does that. After being paid in chocolate, juice, soda, and chips, it was time for session, which started at 10:00 am. We went to the General Assembly Delegate building, and while everyone was waiting for session to start, I started flipping through the schedule to look at the bills and voting schedule. Apparently, the delegates read through and discuss bills three times before they vote. Unfortunately, this was only the second reading, which was a bummer because I wanted to see the voting process in action. The speaker eventually banged the gavel, which happened to be much bigger than the gavels we use at Model UN – and then the session would start – or so I thought.

We started with the Pledge of Allegiance. At school, I sit during the pledge to protest institutionalized racism on the basis of economic disparity, gerrymandering, voter disenfranchisement and restrictions, monopolized industry of pharmaceuticals, and the threat of congressionally-assisted gun massacres.  I was fine standing this time despite my anger over the “Under God” section. Anyway, I thought that would be the only sketchy part of the day, but afterward, we were introduced to a priest.

This was a little strange for me especially when the priest started leading everyone in prayer. It wasn’t even subtle; he specifically mentioned following Jesus Christ to lead a successful and fulfilling life.

Some lines cannot be crossed, especially when it is a constitutional violation to merge religious beliefs and the people’s government. Taking the constitution out of my pocket, I quietly asked Hains how this was legal. Apparently, the courts ruled that it was, despite the First Amendment, “Congress shall make no law respecting an establishment of religion.” After that disquieting event, the delegates proceeded into session.

The delegates were very down to earth. They were all visibly grateful that it was Friday and everyone cheered when the motion to close session passed. They were, contrary to what most expect, very polite and nice to the colleagues that they disagree with. Popular belief suggests that political debate is chaotic and immature. While this is true in some cases, our state legislature rises above those expectations.

Other than doing a couple votes to reschedule debates and committee meetings, there were a few speeches. Before the speeches, a delegate made an announcement that the delegate next to him just had his tenth grandchild, to which everyone cheered. The speeches reminded me of Model UN – more specifically when someone you didn’t expect to speak walks up with a few messy notes and gives a speech that leaves the opposers stunned. This happened with an anti-expanded Medicaid speech and a speech about the people who should be commemorated for their outstanding work in the Civil Rights Movement during Black History Month.

Although I dislike the idea of not expanding Medicaid, I could respect the work put into the research, notes, and public speaking. The delegate who gave the speech had enough decent ideas about politics to be in office, and it showed in his work. This kind of respectful opposition and debate is what I like about politics. Politics, if not respectful and well-articulated, does not belong in any office, especially in a time where ad hominem fallacies, or personal attacks, are thrown around like cats and dogs.

After that, we went back to the Pocahontas Building to do some extra constituent data work. I put the information I could read into a site that tracked what district people live in. Then, it was almost noon and time for my legislative aid session to end.

As I was leaving, Adams introduced me to other delegates. I met Schuyler Vanvalkenburg, Deborah Rodman, and a few other delegates who took some pictures with me. I had seen a couple in the halls, but didn’t know that they were delegates. I wondered how many delegates, senators, or other important people I had bumped into in the elevator or the halls without knowing it. Once again, I saw how down to earth these people were. I told them about my petition to demand police transparency, and Vanvalkenburg asked me when I would rule the world, right before another delegate gave me his card telling me to hire him when I’m older.

Maybe next time I’m there I’ll be a page, a Legislative Assistant, or a representative.