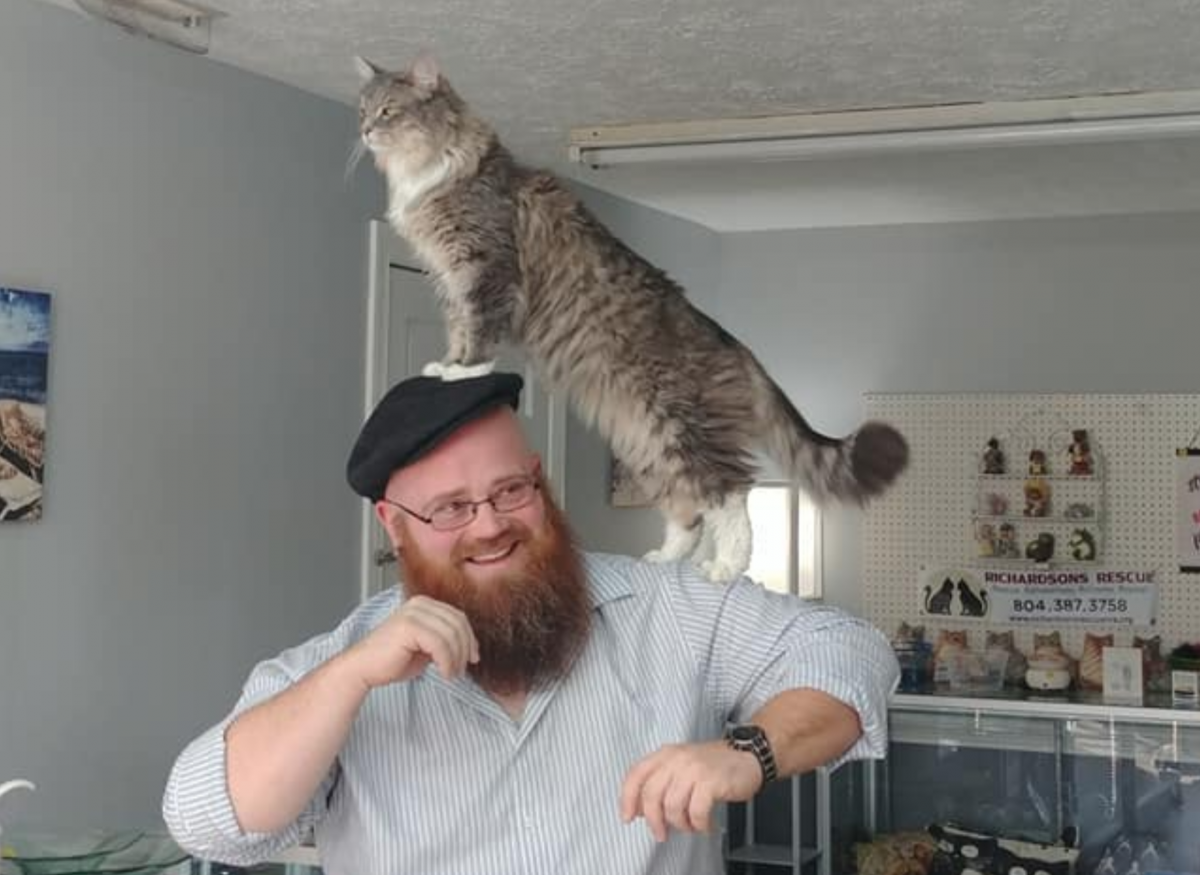 “It takes a village to raise a child, but it takes a city to run a shelter.” At Richardson’s Rescue, volunteers care for cats in an open environment, exchanging kennels for a consignment-shop environment.

Upon entering the Richardson’s Rescue boutique, visitors may be greeted by Reese: a stunning calico cat that likes to scale the windowsill of the room. The classic rock of “Hotel California” by The Eagles fills the room, and the smiling face of Helen Miller, Executive Director of the rescue, welcomes new visitors. It’s a comfortable, safe environment, and inspiring that feeling, both for visitors and the cats that live there, is certainly the goal.

“This is a way for them to live in an in-home environment,” said Miller, who is also a retired scientist from Altria. “People can come see them and see how they really are, because most of them cower and hiss in a cage at a pet store.”

Richardson’s Rescue, founded in 2015 by twins Jerry and Terry Richardson, was originally a home-based rescue that used foster homes to care for local cats. They are a non-profit, entirely volunteer-powered organization that continues to run with communal support and “the kindness of strangers.” Assistance comes from various groups within the Richmond area, including different low-cost veterinary clinics, monetary donations from sponsors, visitors who keep the cats company, and even veterinary science students at a local high school. It takes a village to raise a child, but it takes a city to run a shelter.

“I’ve got a bunch of kids that volunteer for us,” Miller said. “We’ve got the Tuckahoe IB students that volunteer on a regular basis. Hermitage High School’s ACE program has been with us for about four years now. They foster for us in the classroom — it’s a lot of fun. I love working with the kids.”

As Richardson’s Rescue began to grow, they searched for a larger space. They needed an area to house supplies and bring in cats for evaluations, as well as an area for quieter cats to work on socializing in a comfortable environment. For all these needs, they felt that a quaint, apartment-like location would fit the bill.

Thus, the Richardson’s Rescue boutique was created. Located on Ladiestown Road in Mechanicsville, the space checks all of the boxes. As we toured the facility, Miller described the necessary transition, and the way the new space offered opportunities that were once unavailable. An example of the boutique’s benefit to the shelter is the various items for sale throughout. Cases filled with vintage jewelry and colorful artworks are displayed upon the walls, all available for purchase.

“We need to make money and keep the lights on,” Miller laughed. “All of the items in here are for sale, and everything is donated.”

The goal is  to use the shop as a space for hosting events. The organization has big plans on the horizon for future opportunities.

“We’re going to have belly dancing classes! We’re going to try Family Night and Game Night [as well],” Miller said. “Vendor events on the weekends, we’re not quite sure yet. We are newly opened with this, and we’re going to see what works. But we know this is working for the kitties.”

Richardson’s Rescue has hosted many community-centric events, which began long before they moved into the new space. One is their recurring “Kitten Cuddles,” which takes place at various venues around the Richmond area, including breweries, corporations, and festivals. These events bring small cats from the organization to the hands of the grateful public, serving as both the ultimate de-stressor and a way to spread the word about potential adoptions.

“It gets our name out there, but it also [gives] people who love cats but can’t have them… a way to snuggle a baby,” Miller says.

Every year, Richardson’s Rescue also hosts an annual fundraising auction. Each event has its own purr-fect title, like “Caturday Night Fever” and “St. Catrick’s Day.” Attendees bid on donated items, ranging from gift cards, art prints, and designer items to furniture and even vacations. Miller joked that they would “take anything!” that people want to donate. Last year, local meteorologist Mike Goldberg hosted the event at the beautiful Jefferson Lakeside Country Club, in exciting and comical auction.

These efforts are important to keeping the business afloat, but money is not the most important thing to the volunteers at Richardson’s Rescue. If you cannot donate monetarily, Miller explains that a donation of your time is just as valuable.

“We would love people to come in,” Miller added with a smile. “You don’t have to buy anything… just come in and see the kitties. We have WiFi, a TV, a radio. Come in and hang with them, they need more attention than just us. You might even find your perfect match.”

The organization has rescued cats from numerous life-threatening situations. In the cozy sitting area of the boutique, a young and cuddly cat named Darla lounged while we conversed. A black cat with patches of white, Darla is one of 28 cats the organization rescued from Hurricane Dorian this past September.

“There was a coastal shelter that was in the direct path where Dorian came through,” Miller said. “There was a guy named Cowboy Jim who went down and evacuated the entire shelter… There were 28 nice cats, and we took them all.”

While stories like these are particularly impactful, other less dramatic tales are much more common for the boutique’s cats — many of whom have been mentally affected by their environments. One in particular is Goose, a gray female cat who sometimes sends casual growls to visitors as she perches with small toys.

Goose was one of the first kittens to arrive at Richardson’s Rescue in 2015, and was initially adopted. Unfortunately, the family had a child who was allergic to cats, and had to bring Goose back to the shelter. Upon arrival, she was shattered.

“She’s not a bad girl anymore,” Miller said. “She was just a product of her environment. Her life was turned upside down, confused.”

Miller and her volunteers have been working with Goose since the day of her return, making great strides working on her behavior. Despite her improvements, Goose has been the longest occupant of Richardson’s Rescue. Miller hopes to change this soon, promoting her adoption heavily on social media.

“My daughter says Goose will be here until the walls disintegrate,” she said. “I don’t believe that.”

Despite the struggles, Miller spoke fondly about all of the current and past cats of Richardson’s Rescue, showing off photos of each successful rescue with obvious love for each cat. She feels the same for all the current residents. Mama, a sweet tabby, makes herself at home upon visitors’ laps with content purrs vibrating throughout her small body. There are many cats that come from different backgrounds, both bad and good.

“There are highs and lows,” Miller said. “It is hard. You see a lot of wonderful things, but you see a lot of bad things. You meet incredible people, but you also see the not-so-good people.”

Many of the situations these defenseless animals find themselves within are indeed “not-so-good,” leaving them to find homes at the shelter. Miller described many instances in which she was struck by the mistreatment of these animals. However, she always attempts to keep her composure and remain professional.

“We try not to judge,” she said. ”We just want to help the animals.”

The state of Virginia recently passed “Tommie’s Law,” which makes animal cruelty a felony in the Commonwealth. Tommie’s Law was passed after the death of a pitbull named Tommie, who was found tied to a pole and set on fire in Richmond’s Abner Clay Park. His rescuers advocated to pass the law, which prohibits “cruelly or unnecessarily beating, maiming, mutilating, or killing a dog or cat,” as well as abandonment. Shelters are especially grateful for this increased penalty, since the majority of their residents come from situations of neglect like Tommie’s.

In spite of the bad experiences many animals have endured, Miller reflected on the highs of her profession with obvious happiness, showing true care for what she does.

“What’s fun is bringing in a super sick kitten, and watching it flourish,” she said. “From being almost dead to turning into this amazing animal, and getting to go to a fabulous family forever. Lifesaving.”

Volunteers who find time in their schedules to create a bright future for cats, and many other animals in need, are vital to this shelter’s upkeep. Meeting the wonderful feline faces at Richardson’s Rescue shows that even though volunteering is, at times, a thankless pursuit, it is still possible to do significant work for the community while saving vulnerable lives in the process.

As Miller says, “For every cat you foster, two are saved.”

Find Richardson’s Rescue on Facebook and Instagram at @richardsonsrescue. To support the shelter, visit their Help Our Cats page to donate to their PayPal, bring in supplies, and learn about fostering a cat.