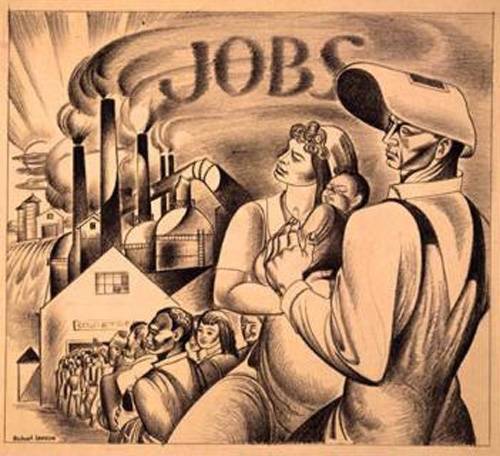 Good day everyone! Hopefully you’ve slept in, and are now having a nice late breakfast. We hope you’re planning on perhaps grilling out today, in honor of, you know, labor, and stuff.

Good day everyone! Hopefully you’ve slept in, and are now having a nice late breakfast. We hope you’re planning on perhaps grilling out today, in honor of, you know, labor, and stuff. Perhaps you’re painting yourself a nice “Obama = Hitler” sign, and plan on spending the day making clearly logical arguments about how health care reform is simultaneously communist, marxist and fascist. But why? No, I’m not questioning your tea-bagging, or your god-given right to yell about things. What is Labor Day?

In a nutshell, Labor Day is communism. It’s the big government acknowledging that there is a federal role in how labor and business interact; Labor Day is a concession made by the government to the workers, much like weekends, maternity leave, minimum wage and other pinko liberal ideas.

In 1893, the United States saw a serious depression. It was a rather complicated fiasco, but in the end it was caused by railroad overbuilding that was financed by shaky deals, causing a series of bank failures. Twenty-four years earlier, the Union Pacific and Central Pacific railroads had met, completing the trans-continental railroads. Uninterrupted (kinda) travel across the country was possible, and railroad expansion was one of the top businesses. Industrialists (“fat cats”) were getting extremely rich building railroads, much of it unneeded, and built largely with underpaid labor. Most of the expansion was being funded via speculation. Currency was unstable due to mass amounts of silver available, as the rapid expansion of railroads led to new silver mines being accessible. The government was buying silver, but the notes given out in exchange for silver were quickly turned in to redeem gold from the government. The government’s gold reserves ran out, and as the U.S. currency was pinned to gold, currency value plummeted. Silver was flooding into the market, so it’s value plummeted, too, and the notes that had been given out for silver were made worthless.

Government : Sell us silver, and we’ll give you notes that are good for gold.
Person : That’s great! Here’s some silver.
Government : Wasn’t that easy? Here’s a note!
Person : I’d to redeem this note for gold, please.
Government : All out, sorry, and quit whining, what are you, a baby?

How do these things effect laborers, though? They didn’t. Most major corporations, especially the railroad industry, were fiscally conservative, and responsible, not engaging in currency speculations. Ha! Just kidding, no, major companies and banks were dropping like like frogs from the sky during a plague, except with worse fiscal fallout than when the Jews left Egypt. In total, 15,000 companies and 500 banks hit the dirt, and during the depression’s peak, some estimates say that one out of five people were unemployed.

Let’s bring it back here for a minute. How did all of this lead to Labor Day? Well, it’s a tale of two men. One was a socialist (although he wasn’t a socialist when the following events transpired), and one was a total dick. although he may appear to be a badass, this guy sucked.

Let’s start with the boss. George Pullman was an inventor, industrialist, entrepreneur, and such an asshole that his body had to be buried in a lead casket covered in concrete for fear of post mortem retribution. That’s right: he was SUCH a bastard that his family feared people would try to exhume and beat up his dead body. Pullman owned the Pullman Palace Car Company, and built fancy-ass railroad sleeper cars.

Pullman’s Sleeper Cars: luxury built on the backs of the bruised

He owned the town of Pullman, Illinois, where his factory was located. He owned all the structures, and although Pullman was a far from being as crappy as most company-owned towns (most of which were extreme slums), things in Pullman weren’t exactly peachy. As the economy declined, demand for sleeper cars dropped and the company’s revenue plummeted. Pullman increased wages but cut hours, resulting in a net loss of pay for the workers. Pullman did not, however, reduce rent, utility, or any other costs of living in his town. Due to the diminished wages and long working days, his workers then went on strike. Enter Eugene V. Debs. Many of the Pullman workers were members of the American Railway Union, controlled by Debs, and the ARU quickly called for a boycott on all trains pulling Pullman cars. The factory shut down, and within days of the boycott on June 26, 1894, 125,000 workers had quit rather than pull or switch Pullman cars.

There comes a point in many arguments where words and reason break down, and people decide that it’s time to break shit. This happened, starting on the 29th of that month, after a peaceful solidarity gathering, when workers started burning buildings. Things generally went downhill from here, with President Grover Cleveland sending in U.S. Marshals and twelve thousand U.S. Army regulars. In the end, thirteen strikers lost their lives, and many more were wounded. Debs was tried & jailed, and spent most of his six months behind bars reading Marx, later became one of America’s most prominent socialists, joining the ranks of Carl Sandburg, Jack London, David Dubinksy and anyone Glenn Beck doesn’t like.

The breaking of the strike was a press nightmare, and Cleveland feared organized retribution from unions. Six days after the strike, congress unanimously passed legislation designating the first Monday of September as Labor Day. Forget that the rest of the world’s Labor Day, International Workers Day, which falls on May 1, and that May 1 is “Law Day,” “Loyalty Day,” or more basically “don’t be a fucking commie day” as proclaimed by Dwight Eisenhower. The banks and industrialists clearly learned a good lesson, and have never caused economic havoc via market speculation again, and as Labor Day has since existed in America, there have never been any problems between workers and industrialists again, because we get one Monday a year off.