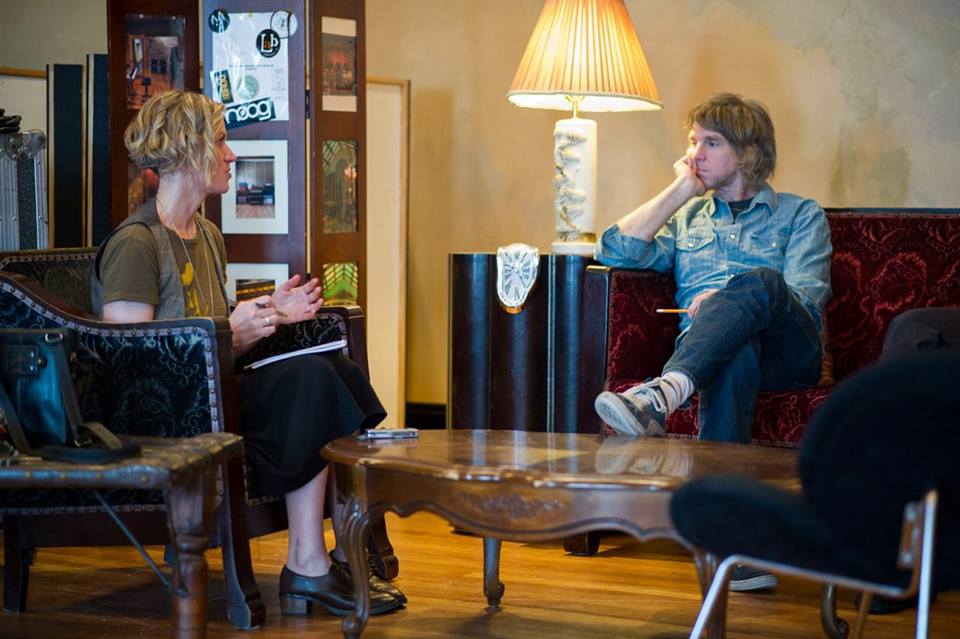 Alli Marshall never intended to be a journalist. She studied global studies as an undergrad and then received her MFA in creative writing.

Alli Marshall never intended to be a journalist. She studied global studies as an undergrad and then received her MFA in creative writing.

But now here she is, Arts Editor at Mountain Xpress, an alt weekly out of Asheville, NC, and author of the new novel How to Talk to Rockstars.

Her career began when Marshall submitted a piece to Mountain Xpress about one of the original Monument’s Men. While the editor at the time couldn’t use it, he offered her a job in the Arts and Entertainment section.

She writes about all kinds of events and acts coming through North Carolina, but most of her work revolves around the music scene. She’s now interviewed hundreds of musicians including seasoned performers like Cyndi Lauper, Yoko Ono, Ziggy Marley and many more.

“It wasn’t something that I set out to do,” Marshall said. “I just kind of evolved more and more into that.”

While not a musician herself, Marshall’s love for all kinds of art, whether it is literary, visual or musical, has made her an effective interviewer.

“I’ve just really kind of gotten away from the whole, you know, ‘who are your influences?’ and that kind of thing,” said Marshall, who said she now knows to focus more on things like the creative process, or how to deal with artistic rejection. “Those sorts of things that creative people deal with.”

Marshall said one of the hardest parts about her job is when she may be asking the right questions, but she just can’t get any enthusiastic responses.

“You get like the one word answer or you can just tell that the energy is not there and they’d rather be doing anything other than talking to you,” Marshall “But somehow you have to get through it. You have to get some answers so you can write something. That’s hard.”

How to Talk to Rockstars is the culmination of more than 10 years experience interviewing musicians and her spark for creative writing. Marshall said she’d written many drafts of novels but didn’t feel connected enough to them to go through the tedious editing process.

The proof for "How to Talk to Rockstars" just arrived. This is getting exciting!

It was her husband, who happens to be a musician, who told Marshall to write about what she was passionate about and not worry about what she thought would sell well.

“And I thought, this is the thing,” Marshall said. “These are the conversations and the ideas that I take home with me at the end of the day. And these are the people who I continue to really think about are these musicians who I’m interviewing for work. The storyline just kind of presented itself in that way.”

Her novel stars Bryn Thompson, a shy girl who managed to find her dream job as a music journalist. The plot thrives on the balance Bryn works to maintain while interviewing bands she loves, but must remain professional about. Bryn starts to break those rules when she meets musician Jude Archer.

Marshall said the story line is fictional, particularly the romantic aspect as she has been married since she began as a reporter, but she draws on many of the interviews she’s done.

But Marshall does call her work “emotionally autobiographical.”

“I would say that there’s a lot of internal dialogue just about the love of music and wanting to talk to people, wanting to reach out,” she said. “I think that a lot of that is based on my own feeling.”

Even though Marshall never felt drawn to a musician in the romantic way her main character does, she does understand the struggle to maintain an emotional distance when you love a band.

She said as a writer, you research bands you love and find out all of these cool facts about them, so that when you interview them you feel a connection. Marshall said it’s easy to get caught up and think after you’re amazing interview, you’re going to hang out at their show and become fast friends.

“It’s just that understanding that none of that is real,” Marshall said. “And the better job that you do with your research, the better questions you come up with and if they like the questions and actually respond to them well because you’re doing a job but it’s not because you’re going to be best friends.”

Now Marshall is taking those thoughts and her book on the road with her own indiegogo funded book tour. She managed to raise more than enough for a publicist and small tour, including a stop at Chop Suey Books on May 16.

How to Talk to Rockstars is published through Logosophia Books,a small independent press, which Marshall said was great because small presses allow so much artistic freedom. However, they don’t have a lot of excess funds for publicity and book tours, hence the indiegogo campaign.

It’s harder and harder to get published by big names like Random house or Penguin but Marshall said the best advice she can give to aspiring writers is to never give up.

“I would say for both, whether you want to pursue journalism or write a novel or nonfiction book or whatever, that you need to write a lot and you need to be undaunted,” Marshall said. “Do not fear failure because you’ll learn from every article you submit that you don’t get paid for and you’ll learn from every time you try to write a draft of a book and it doesn’t go anywhere.”

Speaking to that belief, How to Talk to Rockstars won’t be Marshall’s last novel. She has also written a draft of a new young adult novel and a rough version of a historical novel, which she plans to revisit after her tour. She said the process is always weird when sending out new work because it essentially means a lot of rejection.

But in the mean time, her premiere novel will garner the attention of music and literary lovers alike. Marshall said the people who will really love this book are people who really love bands, which sounds broad but is actually a very specific kind of love.

“People who really relate to bands and go to shows because they want to really feel that connection; want to be there with live music,” she said. “And when you have that experience of like, these songs were written for me. Some how this band is going through whatever it is that I’m going through. Those are the people that I think the book will speak to.”