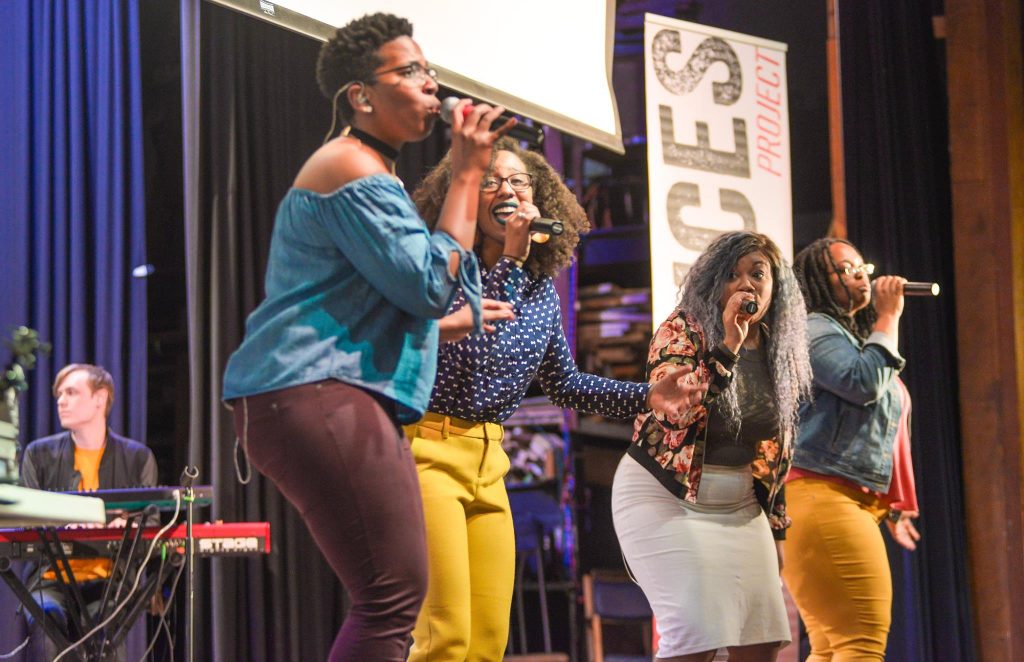 A new documentary about local work towards racial reconciliation premieres this Sunday at The Byrd Theater in Carytown. Titled 11 AM: Hope for America’s Most Segregated Hour in homage to Martin Luther King, Jr., who said church was “the most segregated hour in America”, the film focuses on Urban Doxology, a music ministry of the local nonprofit organization Arrabon.

A doxology is a liturgical praise to God, which is what the group offers: Contemporary hymns dealing with the challenges of racial reconciliation in this city and beyond. Arrabon Executive Director visited RVA Mag to talk about the group and the unique collaborative songwriting process that they derive their music from.

“It’s an eight week internship, with a diverse group,” he said, during which participants learn about “white supremacy, race, identity, class, and cultural issues… instead of a paper, they write a song about what they’ve learned.”

The internship is a partnership between East End Fellowship and Bailey’s Arrabon, which he founded in 2008 after moving back to Church Hill. “I saw two church hills, and wanted to bring them together,” he said about the motivation that led him to create his nonprofit. The group works with faith communities to share resources and a study series for churches seeking to engage in racial reconciliation.

Bailey been working towards racial reconciliation for the last 15 years, “especially in evangelical communities,” he said. Part of that work was a musical tour with Urban Doxology, visiting  historically black colleges and universities, which is where he first met filmmaker Sebastian Rogers of Peripheral Vision PDX who had a proposal to film their work. “What we are doing is so unique, and he’s just such a gifted filmmaker, I knew it was time to do it,” Bailey said about the collaboration.

The film features local interviews and scenes of racial reconciliation work, along with Urban Doxology performances, including clips of them singing at a prayer vigil in Charlottesville the night before violent “alt-right” protesters would take to the streets during the supremacist Unite the Right rally last August. The trailer was released earlier this year on Jan 31.

Bailey said his work is rooted in churches because of historic injustices in the faith. “There’s a one hundred year problem with race in America,” he added. “Christians should be the answer, but more often not we’ve been the problem.”

He pointed to the origins of Christianity as a faith that sprung up in the shadows of oppression. “Jesus came into form as an oppressed person. He was a refugee, an immigrant. When we forget that narrative, we lose track of what the religion is all about.”

Although he wants to talk about and address wrong-doing both historical and contemporary, Bailey stressed that demonizing people is not part of the agenda. “This isn’t a documentary blaming folks, but it’s an invitation, with truth and hope to come together and understand racism.”

He’s optimistic about reconciliation, contrarily pointing to some current unrest as proof that society is moving in the right direction. “Diversity guarantees conflict,” he said. “Things are changing. People who are used to feeling power are starting to experience equality, and it feels like oppression to them. We can’t leave them behind, we have to bring them up with us.”

He described honest engagement as the key to solving that unrest. At the end of the screening he’ll provide some of that dialogue with a question and answer session, which he hopes will serve as a “starting point” for people to begin reconciliation work.

Bailey said his goal for the film is to “serve as a catalyst.” He even wants people to learn from the “alt-right” marchers in Charlottesville, he added, saying, “The people in Charlottesville were bold although wrong. Can we be bold and right?”

The film begins at 2 PM. Tickets can be purchased in advance for $5.