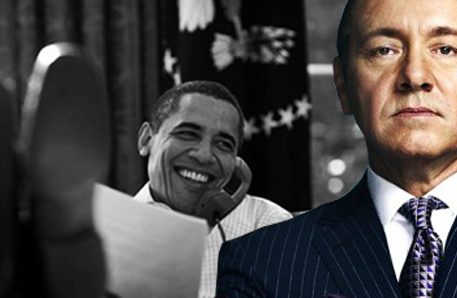 In what seems to be becoming an annual tradition, the most powerful man in th

In what seems to be becoming an annual tradition, the most powerful man in the free world has reached out to the world’s largest distributor of digital content and asked for a snow-day favor.

As President Obama awoke this morning, along side the many other Americans buried in the latest snow storm, he put a call in to Netflix CEO Reed Hastings.

“This might sound like a joke, as if we’re in the movie Ground Hog Day,” said Obama, referencing the same phone call he made last year, according to a press release sent out this AM. “But, Reed, I’d be great if you could start ‘House of Cards‘ early this year. Again, we’re buried in snow. Again, the American people want to know what happens to Frank Underwood and that stone-cold fox of a wife Claire. And again, we’re stuck in our homes due to bad weather.”

Netflix’s House of Cards follows Congressman Underwood (Kevin Spacy) as he attempts to gain power through a fictional modern US Government. Helmed by famed director David Fincher, the show stood out as not only being incredibly well produced and written, but also capable of keeping fans attention despite their lack of understanding the larger plot.

Check out the newest trailer for season 3 below:

“I know you said ‘no’ last year,” Obama continued. “But it never hurts to ask.”

Much to his, and the rest of the country’s dismay, Netflix declined the Presidents request.

“As we said last year,” Hastings told the Prez in the early-morning phone call. “We plan our release dates many months in advance, and we can’t change that – even for the leader of the free world.”

From his sunny, warm mansion in California, Hastings laughed and asked the Commander-in-Chief for patience. “We can’t just alter our business plan because of bad weather,” he remarked.

For a second year in a row, the top-secret info leaking website Wikileaks has since released an audio clip of a recorded phone call between Obama and Hastings. In the background, you hear First Lady Michelle Obama popping pop corn. “Please Mr. Hastings, it’s cold and I’m still in my PJs!” says a distressed Obama in the tape.

Last year Obama made the exact same request as most of the East Coast was similarly buried in snow the day before House of Cards season 2 was slated for release.

About 670,000 people binge-watched the entire second season of the show when it premiered last February – about 2% of Netflix total subscribers.