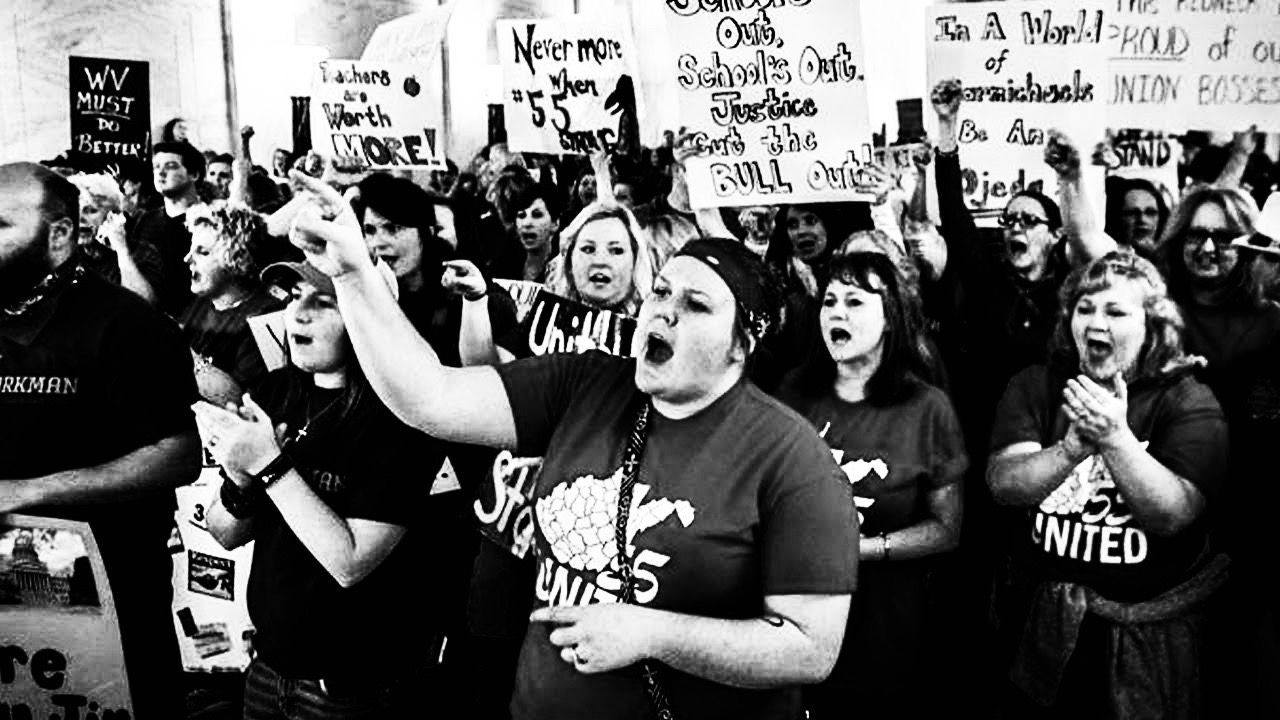 On March 5, 11 days after the first day of the historic statewide strike, the West Virginia Capitol was packed wall-to-wall with educators, students, workers, and their families. Despite threatening Right-to-Work laws, government bullying, and intimidation, and around betrayal by union leadership, all of which could have prevented or debilitated a weaker movement, WV teachers are more agitated, organized, and determined to win than ever before.

They are striking for a natural gas severance tax that creates a self-sustaining source of revenue for public employee insurance and pay, a stop to regressive taxes, a pay raise of 5 percent per year over the next five years for all public employees, a permanent tabling to all legislation pertaining to co-tenancy and joint development, and a permanent tabling to all legislation to charter schools, voucher systems, and any attempts to privatize public schools.

The connections between their demands and the needs of public sector employees and educators in Virginia are crystal clear. And they have revolutionized the playing field for teachers, workers, and right-to-work states across the country, including the imminent statewide strike Oklahoma teachers are poised to unleash as soon next week.

The question is, will Virginia educators and workers join the fight that our “wild and wonderful” neighbors have started? Will we let them stand alone?

Some educators may respond with cautious deflections, protesting that organizing or unionizing is illegal in Virginia because of Right-to-Work provisions, but this is simply not true. Right-to-Work does not mean you can be fired for organizing in your workplace; it simply prohibits any contract that requires a worker to join or pay dues to a union as a condition of employment (VA Code Sec. 40.1-58et seq).

Others may demur, ‘well, we don’t have it as bad as West Virginia, our average incomes are not so low.’ To the, I would respond, as the Washington Post recently reported, that though the average Virginia teacher salary may exceed West Virginia’s, our income-to-rent ratio is roughly the same or worse, depending on the level of education. So while we may make more on average, the vast majority of us still struggle to afford rent and basic living expenses, let alone dig ourselves out of the hole of debt required to become an educator in Virginia (which, as the Virginian-Pilot has reported, has led to a statewide teacher shortage crisis).

Furthermore, these comparative numbers only encompass public school teachers, and do not speak to the increasingly desperate circumstances that the booming numbers of adjunct professors face, let alone substitute teachers, teacher assistants, graduate assistants, on-staff tutors, and supplementary instructors, most of whom make below the poverty line for doing utterly essential work, sometimes identical to that of the work done by full-time faculty.

I am among these workers, making near minimum wage to do the same work of lesson planning, curriculum development, lectures, and educational support that professors do. This exciting phenomenon of equal work for half the pay has not gone unnoticed by Virginia school administrators, who are increasingly laying off full-time faculty in favor of the much cheaper option of adjunct professors.

The most obvious example of this, of course, is the now very public battle at Tidewater Community College, where, as the Virginian-Pilot recently reported, full-time faculty have already organized to fight back against a wave of full-time faculty layoffs, to be replaced by lower-paid adjunct professors. This is only the most recent chapter in a long history of rampant administration abuse at TCC, perhaps most elegantly illustrated in the fact that, as student enrollment has dropped by 31 percent, TCC administration hiring has gone up by an even greater 47 percent. I guess you need a lot of salaried administrators to figure out which teachers to fire next!

But TCC is not anomalous in taking this approach to budget shortages, nor is a simple replacement of the president and vice president, as demanded by the TCC faculty, enough to ensure job security for full-time faculty, let alone improve the working conditions for adjuncts or educational support staff. If TCC full-time faculty truly wish to make lasting change and build the broader base of support and solidarity that would necessitate, they ought to organize with adjuncts and wage workers to demand lasting systemic change in the form of better working conditions for all TCC workers and educators in Virginia, not simply a transition of power.

Though Right-to-Work does not prohibit workers from organizing or unionizing, laws do exist in Virginia that render unionizing illegal for public sector employees, including teachers employed by the city/county (public primary/secondary schools) or the Commonwealth (community and public colleges). However, this law makes the specific provision that “Nothing in this article shall be construed to prevent employees of the Commonwealth […] from forming associations for the purpose of promoting their interests before the employing agency” (§ 40.1-57.3). This essentially means that public sector employees legally can (and should) organize and unionize, we just can’t legally call it a union. But what’s in a name?

Though by contrast, it is legal in West Virginia for public sector workers to unionize and strike, the WV Attorney General and the Governor declared the strike “illegal” soon after the teacher’s union leadership sold them out during negotiations, urging them to accept a shoddy proposal and go back to work. Regardless, they continued the strike in all 55 counties. If our Appalachian neighbors have shown us anything, it’s that legal technicalities and injunctions can’t stop a body of organized workers if we don’t let them. Teachers across the country have already started taking up the fight that they started, as well as workers in other industries like the Communications Workers of America, who just announced a strike in locations across Virginia and West Virginia on Sunday.

So, fellow Virginia educators, it’s clear the iron is hot. Will we strike?

Editor’s Note: This story was submitted by a Virginia educator who wished to remain anonymous out of professional concerns.