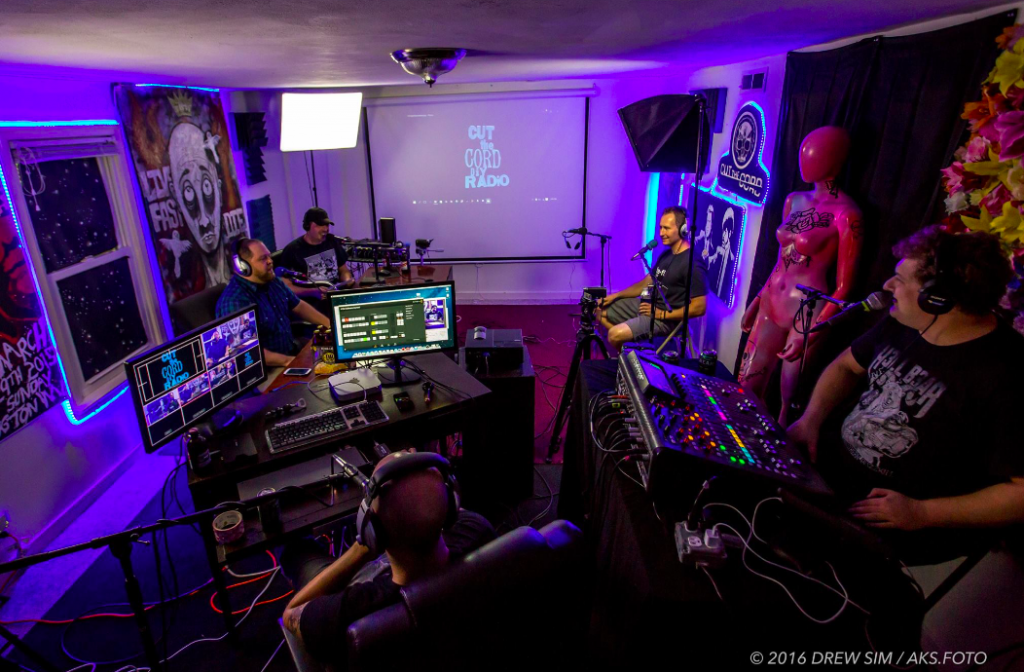 Mike Bickett gets together with five or six friends once a week to drink beer, talk about comic books and movies, make each other laugh and, quite often, take each other down a notch with a well-placed but loving insult.

Mike Bickett gets together with five or six friends once a week to drink beer, talk about comic books and movies, make each other laugh and, quite often, take each other down a notch with a well-placed but loving insult.

Not so impressive, right? That’s an average weekend evening for a 20- or 30-something with nothing else planned.

The difference for Bickett, and a growing community of others in Richmond, is that their jokes and observations don’t exist in a vacuum. During that weekly gathering that Bickett hosts at his apartment, he and his friends are sitting at microphones in a makeshift studio.

It’s not a simple get-together – it’s a recording session for his podcast, Geeks Under the Influence.

“The whole idea of Geeks Under The Influence was that this is basically what we do when we hang out with each other anyway,” Bickett said. “We would get to the point where we were crying laughing over just picking on each other, just riffing back and forth, and I’m like, let’s record it. It’s basically like our poker night. But instead of playing poker we’re talking about how Sandman needs a really faithful adaptation.”

A growing collection of local podcasters have started interacting through a Facebook group, the RVA Community of Podcasters. This summer, several podcasters have met up for a series of crossover episodes to compare notes, share ideas and just talk shop. In addition, local podcasts have started gaining attention through RVA Magazine’s podcast page, which can be found at https://rvamag.com/podcasts.

Geeks Under the Influence panelists Stephen McKiver and Matthew Crumpler said that despite the growing number of podcasts in town, the community isn’t competitive, partially due to the fact that each show has a distinct and nuanced personality.

“None of us do this because we think we’re going to be successful from it,” Bickett said. “I grew up with that punk rock ethos of bands supporting each other in a community.”

“Even if you’re doing the same type of podcast as other podcasts, let’s say, even in town, there are what, like, eight nightly interview shows on TV? Each with different announcers and different jokes and different people being interviewed. There’s all these people doing different versions of the same thing, but you find the one that connects with you,” Bickett said. “We’re not in direct competition with each other.”

Inside The Pallet House has a similar concept to Geeks Under The Influence, Bickett said, but is executed in a completely different way. The panel podcast has a similar “poker night” feel without a specific topic or theme, providing a way for friends to get together and laugh, drink beer and catch up with one another.

“At first, our name was a play on Inside the Actor’s Studio because they’re talented and we’re not,” Inside the Pallet House host Brendan Kennedy joked. He said his weekly show is “mostly focused around beer, shit we care about and music.”

While Inside the Pallet House and Geeks Under the Influence prefer a newer style of genre specific-podcasting, Cut The Cord Radio, hosted by Tyler Matthews, aims for a more shock jock-style, multi-platform product. Matthews said he’s influenced by Howard Stern and his contemporaries.

After being introduced to Stern at a young age by a father figure who was a radio enthusiast, Matthews went on to develop a fascination with audio gear and production. His show, which is streamed live, posted as a downloadable podcast and also shot for YouTube, began in an efficiency apartment. Today, it’s recorded in a studio full of recording equipment.

“I just kept adding gear,” Matthews said. “I do podcasts, but I consider myself internet radio because it’s live. People can call in. I go live on Mondays at 6 p.m., and it’s always happening at the same time.”

“The difference between Cut the Cord and GUI is that I was influenced by Pump Up the Volume, and you were influenced by some weird baby of Howard Stern and Wayne’s World,” Bickett told Matthews.

Bickett, who has dabbled in stand-up comedy and played in bands, came to podcasts with performing experience, but very little technical know-how. He had talked about starting a podcast for more than a year before he finally got the courage to try recording.

“What really did it for me was that I was a little sad sack – I was not in the best spot,” he said. “I realized what I really needed to do was find something that gave me drive, and I had this podcast idea that I’d been sitting on for a while, so I went through with it.”

Now, Geeks Under the Influence is looking at branching out from a single podcast to a network. Plans are in motion for several podcasts hosted by regular panelists, including The Good, The Bad and The Hungry, a restaurant review show hosted by McKiver and his Wife, and Tales From The Bar Side, hosted by Crumpler, which will feature stories from those who run or work in bars.

Endless Bummer, a podcast by Mike Engle, focuses squarely on music and comedy, the host’s two passions. Engle said his inspiration came from many hours of listening to comedy podcasts to ease the boredom and frustration he felt working at a sedentary, dead-end office job.

He finally took the plunge and tried his hand at both stand-up comedy and podcasting.

In addition to stand-up gigs and regularly publishing his podcast, he also hosts a monthly live show, A Comedy Show feat. Music, at My Noodle & Bar.

“The fact that this is a thing I can do it – my child self would think I’m living the dream,” Engle said. “I’m a big advocate of creating your own culture. Make the world you want to live in.”

Nick Nundahl, who hosts a YouTube video podcast called Instant Replay Live with his brother, Joe, said the two started their show to spend time together.

“My brother and I had drifted apart,” Nundahl said. “We lived in different states and hadn’t been talking a lot – probably a decade had passed since my brother and I hung out. We were like, hey, people are playing games and recording it – that’s a way we can catch up and have some fun. It worked out really well for us.”

Eric Schmiel, who has a video blog called Schmiel Show, said it can be hard to keep going in the early days of a podcast or vlog.
“You’re putting all these hours into making a thing, and what’s more, no one’s listening to it. No one knows you’re out there, no one’s seeing it,” Schmiel said. “I think that’s one of the greatest hurdles, and it’s one of the earliest ones that has to be overcome.”

That’s one of the reasons, Bickett said, 80 percent of podcasts don’t make it further than eight episodes.

Nundahl agreed, and said the struggle doesn’t ever fully end.

“Success will mitigate that in some way, but no matter how much we’ve grown, I’m always looking at why we haven’t grown as fast as that guy,” Nundahl said. “It’s not anything I think anyone should do, but you can’t help but compare. What I’ve found is when I start getting into that state where I’m depressed or I feel like no one’s watching, I try something new. You need to love what you’re doing, and if you find yourself in a place where you’re not enjoying it but you still want to keep doing it, change something. You’re not beholden to anyone. Your audience, however many people it is, maybe they don’t like one episode. But maybe they will, and they’ll share it out to like 50 friends.”

Dylan Ilvento of the Ward Games podcast said the key for him is remembering why he does it. “I’m doing this for myself. And whether or not someone else is going to come along, that’s on them.”

That said, the collaboration of a group of panelists keeps things interesting. Ward Games, which focuses on video game design, theory and development features local panelists and guests from the game industry.

“I’m used to doing solo work a lot,” Ilvento said. “Podcasting is very much a group creative effort. You may have an idea of what you want the podcast to be. Everything you might want to say or want to communicate with the podcast might not come out, and you have to accept that.”

Schmiel said the simplest advice can be the hardest to follow.

“If you want to do it, just do it,” Schmiel said. “It’s nice to actually have something you can show people. Don’t worry about how good it is. There’s something so validating about actually having a body of work. Even if it’s bad, just having it exist legitimizes you as a creator in some way.”

As for the idea that content and consistency are key, Engle agreed. As long as you’re putting together a product and regularly releasing, improvement, he said, will come with practice.

“At first, it was me whipping out my phone, going to voicemail and hitting record,” Engle said. “That’s about as DIY as you can take it.”

For Bickett, pushing through doubt and barriers led to development, learning, and ultimately, satisfaction.

“The real trick was just knowing to celebrate every single moment that you got a little bit better. Even if it’s not important to the rest of the world, it’s important to you. And that’s what matters at the end of the day.”