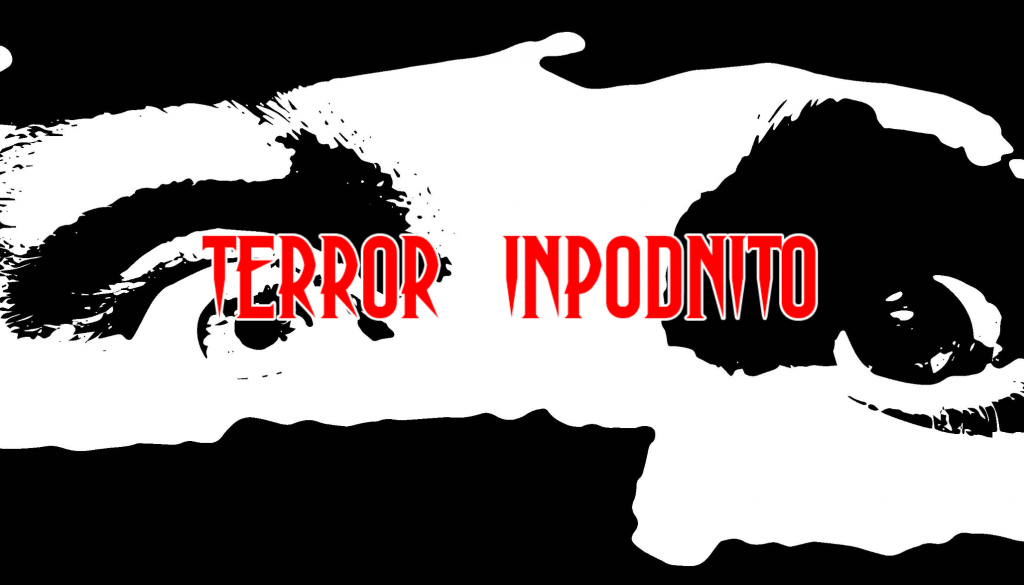 October has ended, but every day is Halloween in my heart. It’s nice when everyone happens to be in the spirit at the same time, but what am I to do when that month ends? Luckily, there’s a horror podcast that spends the entire year talking about horror films and the surrounding pop culture, which I can listen to anytime, whether it be October 31st or February 2nd.

Terror InPodNito is a weekly podcast that discusses all things horror: from movie reviews to news and theories, they cover every nook- and blood- and gut-soaked cranny they can get their hands on. Started by three friends (Palmer Sturman, Alex Lootens, and Sam Berson), Terror covers everything that is badass about the horror genre.

I went to visit the podcast on one of their recording nights, and fitting enough, it was when the Richmond area was under a tornado watch. Of course, it rained and flooded on my way there, and the power went out toward the end of our interview.

The podcast records in Sturman’s home, which was covered in Halloween decorations and ready for the season — with bins of more decor ready to go up when he and his wife got a chance. I was also greeted by Luna, the world’s biggest, fluffiest, and friendliest dog. Not exactly what I would have expected out of an interview about horror, but it was a much-welcomed surprise.

They had been friends for a long time, and shared a love of discussing horror films. After a good drinking session, they wondered the question we all would in that situation — Why not do a podcast?

“It started with off with us giving a synopsis of films,” Sturman said. “We kind of got bored with that really quickly, so we started adding new segments and seeing where things went.” Lootens added that it got more analytical as it went on, even though they laughed that none of them have any kind of film education.

One of Lootens’ favorite parts of the process is how they choose not only the theme for each month, but which films fit the chosen theme.

“We [choose them] as a group, and I feel like sometimes it has to do with the holiday,” Lootens said. “This month would of course be Halloween-themed movies, and Christmas would be Christmas-themed movies. But for the months that don’t have a specific holiday, we try to bounce around with different topics.”

Sturman added that they try to come up with a variety of different topics in order to keep things interesting. They keep a Google Document together so that any time someone has a new idea, they can add it and check it out.

“Generally someone comes up with a theme, and then they’re like, ‘Oh, this movie would fall under that!’,” Sturman said. “For instance, one of the ones that I have included on the document recently is Wild West films that are also horror films. And I’ve found more and more that fit that niche.”

I wondered if they ever came up with a great idea only to not find films to fit the theme — but they assured me that the opposite has happened. If anything, once they come up with a theme, they generally have issues narrowing the films down. After all, Wikipedia currently lists over forty different Christmas Horror Films in that category, so I guess anything really is possible.

The horror genre has been more ripe for remakes than any other genre, it feels like; so naturally, there are going to be feelings about the handful of remakes announced this year alone. Their take on remakes? Make it original.

“For instance, the remake of Psycho, which was a blow-by-blow remake of that movie? Don’t do that,” Sturman said. “This is going to be really controversial, but I really liked the Rob Zombie remake of Halloween. Part of the reason that I really like it is because he went in an entirely different direction from the original films, and gave Michael a purpose. A lot of people think that was a shot and a miss, but I enjoyed the fact that if you are going to take a franchise and try to reboot it, you go in a different direction.”

One thing that we for-sure all agreed on, though? The remake of Dario Argento’s Suspiria is going to be all kinds of glorious.

“When I first heard about [Suspiria], I was adamantly against it, but I have seen so many trailers for it that now it’s one of my most-anticipated movies,” Sturman said. “We finally saw it on the big screen. The trailer looks even better when it’s a hundred feet,” Berson added.

We would be remiss if we didn’t acknowledge that focusing on one thing changes your views on things. Despite not having studied film, the cast can make a solid argument for being on-par to film students at this point. One of the main things that has come from doing this podcast has been not only how they analyze films, but also the fact that they just can’t watch a film in the theater anymore.

“I don’t like watching movies in theaters anymore because I can’t pause it,” Berson said. “I can’t rewind and double check if I saw something. There are still some movies you have to see in theaters.”

“It’s harder for me to watch movies I’ve seen now,” Sturman said. “Now I’m not watching them for pure enjoyment, I’m watching them to pick them apart, whether it’s for good reasons or bad reasons.”

Thanks to overwhelming support from fans and the horror community, Terror InPodnito has received the opportunity to experience some pretty stellar things. From a friendship with Red Vein Haunted House, to interviewing a major horror icon, to even just meeting fans who loves their podcast, things have been pretty great so far for the trio.

“In Williamsburg, there is a horror convention called Scares That Care, and it’s a charity event and a horror-con,” said Lootens. “We had the opportunity to interview Doug Bradley, who is the original Pinhead, and Adrian King. For 45-50 minutes each, they took the time out of their day to sit down with us. Interviewing Adrian King was amazing and just… I got to talk about David Bowie, my favorite singer, with Doug Bradley, my favorite horror icon, and it changed my life.”

“The biggest draw for me, and the reason I continue to do this, is the people,” said Sturman. “We’ve connected with so many people that we just never would have an opportunity to otherwise. Not just horror icons, but fans. At Scares That Care, we met a fan that listens to the podcast and it blew my mind.”

So what do the next five years bring? As they all took a moment and sighed, unsure how to answer, they all agreed that mostly, they want to keep doing this for as long as both people enjoy it — and as long as it remains fun for all three of them.

“If it gets to the point where we can start making this a source of income, that’s great, but ultimately if it just becomes something where we read a couple small advertisements to keep the podcast alive I’m happy,” said Sturman.”

“I think really we just want to do it until it’s not fun anymore,” said Lootens. “When you break it down to the bare bones, it really is just three best friends talking about stuff that they love and also getting to meet and interview awesome people along the way.”

As we round out the spookiest (and best, let’s all be honest here) time of the year, it’s easy to get sad while we begrudgingly check off the days on our calendar like Linus awaiting next year’s Great Pumpkin. But don’t you worry, horror fans: Terror InPodnito has horror picks and news for you every month of the year — even around Christmas when Aunt Betty wants to ask you, once again, how life is going.

Terror InPodnito can be streamed and downloaded on iTunes, Google Play, Stitcher, and Buzzsprout.