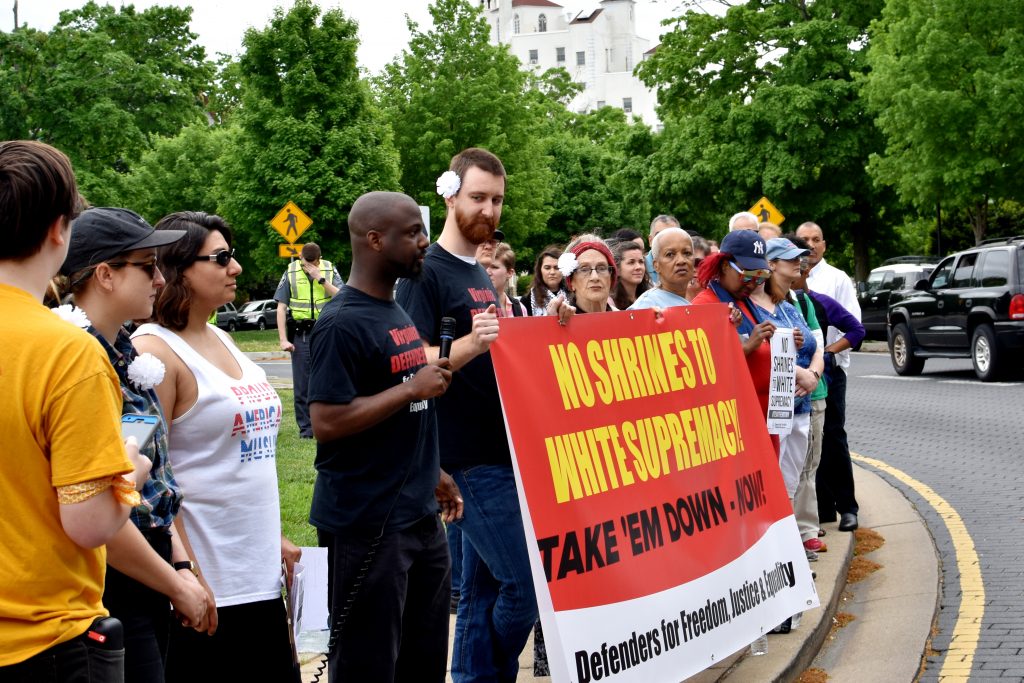 At least 70 supporters gathered around the Robert E. Lee monument on Saturday for an anti-racism rally organized by the Virginia Defenders for Freedom, Justice, & Equality and the Richmond chapter of the Democratic Socialists of America. Clergy and community activists spoke about the Monument Avenue Commission, the Civil War, and the impact and legacy of racism in Richmond.

A concurrent rally took place a few yards away, where 10 or so Confederate monument supporters held their own flags and signs, organized by the Tennessee-based New Confederate States of America. This was their third visit to Richmond since their first last September. Both groups were far smaller than the 200 or so Richmond police spread out across the neighborhood.

Before the event, I had the chance to meet with Joseph Rogers of the Defenders, a historian and anti-racist activist who was galvanized to action after the murder of Heather Heyer in Charlottesville. It was reading the name of her killer, James Alex Fields, the same as his great-great grandfather James Apostle Fields, that he said was the turning point. His relative was a black legislator, one of two in Virginia before Jim Crow laws disenfranchised black voters for nearly 80 years, and he wanted to do something positive to honor his memory after the heinous act by Fields.

The monuments to Confederates can’t be separated from the racist history of the state, he said, adding, that the first act GA passed after forcing his ancestor out “was to instruct the Governor of Virginia to accept on the behalf of the Commonwealth the Lee Monument.” From memory, he quoted the newspaper of the day, the Richmond Dispatch, as celebrating the election results as “A victory for the white man and an end to mixed politics.”

Although Rogers was no stranger to activism and causes, the Virginia Defenders was the first organization he joined. The 15-year-old group is concerned with prison reform, racial equality, and a host of community causes and concerns, and Rogers described it as a “majority black and female organization.”

He’s sympathetic to Richmonders who want to ignore the CSA folks and others, but said history shows the danger of ignoring similar movements. Other groups with overlapping interests, like the Ku Klux Klan, flourished despite a lack of attention and condemnation, and Rogers said, “I believe that countering racism with education is the only way that we win.”

Rogers was skeptical about changing the minds of CSA members, at least at their competing rally. He said, “If they’re coming into town loaded for bear, that’s not the time to have a conversation. We want to reach the person who isn’t at the rally and make sure that [the CSA’s version] of the story isn’t the only one heard.”

Separately, I met with three others who were part of the effort, all residents of the immediate neighborhood around the Lee statue. They were Seema Sked, a Muslim activist who protests neo-Confederate rallies and President Trump’s Muslim Ban, a local man who goes by Goad Gatsby, well-known for public art performances that irritate the Virginia Flaggers who hold Confederate flags outside the VMFA, and Rachel Robinson, who gives out white roses in memory of the peaceful anti-Nazi activists of World War II.

All came to their activism through slightly different channels, but all were inspired by neo-Confederate groups and rallies to do more and speak out. Sked said her activities first began when “President Hitler [Trump] was elected, and I want you to quote me on that,” but that Charlottesville was a turning point.

For Robinson, it was a long-standing family and cultural tradition. She said, “My papa was president of the Jewish Federation [of Richmond], and he taught me, as Jewish people, we need to stand up for the underdog. I want to make my pop-pop proud of me.”

Although all three have long histories of activism, Gatsby had the most experience with neo-Confederates, a group he seems to terrify and entertain. His origin story began, he said, “when the Flaggers posted pictures of me riding by them on a tricycle, playing Kanye’s New Slaves.” He saw the group on a daily basis, just a few blocks from his house, in front of the Virginia Museum of Fine Arts. “It started as a joke, but it became real,” he said about his protests.

Gatsby described the counter-protest last September against the CSA as successful, and pointed to recent articles on the dissolution of white supremacist organizations in response to ongoing protests. Sked quoted a friend who called the September protest “cathartic” in the wake of Charlottesville, and Robinson agreed, saying, “it was just great to see our city come together.”

They admitted they were a little surprised by the second and third return of the CSA, which was described as ridiculous. Sked initially thought they wouldn’t return after they had to start a GoFundMe to get home, asking, “Are you not embarrassed enough?”

Like Rogers, though, they were focused on their own rally, which they said was about racism, the legacy of racism, and posing a question to their fellow neighbors: What does a Richmond without monuments that represent hate and bigotry look like? They all echoed his call for a weapons-free event, with Sked asking, “If you are committed to peace, why would you have a weapon? If it’s heritage, not hate, don’t bring a weapon.”

The CSA rally mostly followed the usual script, although with two surprises: First, several of the typically well-armed protesters were not carrying their standard long rifles, possibly because of a sense within the group that the Richmond Police would be treating brandishing offenses seriously according to some Facebook threads, and second, the former communications person for the husband and wife Confederate memorabilia store that plans the rallies, Tara Brandau, was not in attendance.

The activists stuck to their script, however. Rogers gave the kick-off speech on the history of Richmond and the Civil War, while Robinson handed out white roses to members of both rallies. Adria Scharf, Director of the Richmond Peace Education Center, called for a “bold” recommendation from the Monument Avenue Commission to remove the Confederate statues, calling contextualization or new statues alone not enough.

Off to the side, Gatsby had a civil and friendly, but ultimately unproductive, conversation with a man who went by Bogeyman, who was there to support the statues.

Bogeyman was willing to speak with a reporter, although he wouldn’t say more about his name than “I earned it.” He compared slavery in the north and the south, pointing to moral failures in the north to defend the Confederate side, and stressed that his ancestors had slaves, but maintained that they were treated well. Leaving aside their enslavement and forced labor, he said they weren’t abused by his great-grandfather. He had some praise for Gatsby, who he said, “was OK, a funny guy. I see where he’s coming from, I don’t agree, but we can talk about it.”

He thought critics should just ignore the statues, pointing to the Arthur Ashe statue, dedicated to the tennis player and educator and built in 1996. He said it was of “a tennis player and a gay,” added that he didn’t like it, but asked that the anti-racist rally-goers would look at Lee the same way he looks at Ashe, adding, “I just ignore it.”

Bogeyman isn’t a member of the CSA II, but as a lifelong Virginia resident who proudly traces his family roots back to German immigrants before America was founded, said he wanted “to stand for my heritage and our right to have a statue.”

Phil Wilayto, editor of The Virginia Defender, an independent newspaper, paused on his way back to the anti-racist rally after a brief talk with the CSA. He described their conversation as brief and simple, saying he told them, “The bottom line is we don’t like people coming into town with Confederate insignias and guns. As long as they keep coming back, we’ll be here.”

Another man who wouldn’t give his name but identified himself as a Richmond resident and a history teacher told me he was out to support the statues, bearing a small “Support our heroes” sign he’d made with images of an American flag and a Confederate flag.

He said the real issue wasn’t the statues or the American Civil War, but the Spanish Civil War, which he said was Gatsby’s real influence, pointing at him as he left after talking to Bogeyman. “He knows all about it. He’s inspired by the leftist movement in the Spanish Civil War.” He characterized the conflict as being between traditional government and religious authorities and “the left”, and said, “the left always wants to tear down the past, while the right wants to preserve and build on history.”

Before he left, “because I have a life, unlike [the anti-racist activists],” he claimed that there’d be a lot more religious folks at his rally, although the anti-racist rally was coordinated in conjunction with a number of religious leaders and Christian pastors. I spotted four ordained ministers wearing the white collars of clergy, representatives of the Interfaith Community of Greater Richmond.

As the history teacher left early, the CSA amp started playing the racist song “Dixie”, originally performed by white musicians in blackface as part of the minstrel tradition. On the other side of the statue, the crowd joined in a rendition of the traditional spiritual “Wade in the Water,” led by the Rise Up Sing Out choir connected to the First Unitarian Universalist Church of Richmond.

After a day of peaceful demonstrations and music, the two rallies came to their conclusion, with no arrests or disturbances. If the frequency of the last few events is any indication, Richmond can probably expect to see the CSA II back by August.

Funny That Way: An Interview With Julia Scotti

Julia Scotti is a transgender comedian with roots in the 80s comedy boom. Now, only weeks after her documentary, Julia Scotti: Funny That... READ MORE

Welcome to another week of Missed Connections, where starting things off on a down note is just another aspect of life's rich pageant.... READ MORE

Funny That Way: An Interview With Julia Scotti

Julia Scotti is a transgender comedian with roots in the 80s comedy boom. Now, only weeks after her documentary, Julia Scotti: Funny That... READ MORE

Welcome to another week of Missed Connections, where starting things off on a down note is just another aspect of life's rich pageant.... READ MORE