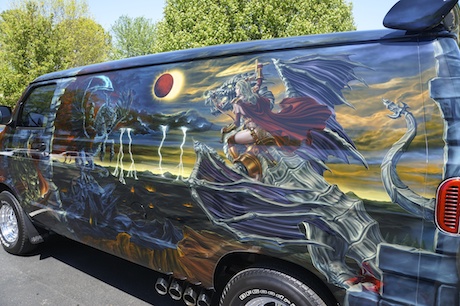 No city is complete without it’s own science fiction fantasy convention and RavenCon is looking to be Richmond’s quintessential convention for all things Sci-fi.

The name is a reference to Virginian writer Edgar Allen Poe but the event itself covers much more fiction than just Poe.

This year’s RavenCon was held at the Doubletree Hotel on Kroger Center Blvd just off the Midlothian turnpike. The event spans three days, just like any other convention. RavenCon is filled with a litany of events, costumes and contests. Mike Pederson who heads the event says “If it is science fiction, fantasy, horror related, we’re going to try and cover as much of it as we possibly can.“ There really was something for everyone with a variety of panels and workshops.

Staff member Carl Kesner gave me a tour of the event and said “the first RavenCon was 1 room… we had 1100 people come out to this year’s RavenCon. The entire event took up two floors of the hotel. Instead of a large main floor, RavenCon had many different rooms for varying interests. There was a game room where people were engrossed in various role-playing games. There was an anime theater room. There was even a room for Magic: The Gathering matches where tournaments were organized. However the busiest room was the dealer room. It was the largest room with vendor tables set up selling art, books, apparel and even swords.”

RavenCon has a reputation for being focused primarily on literature but it has a little something for everyone. The smaller rooms were home to more specific interests, workshops and panels. The event schedule was full of workshops on everything from writing, programming, publishing and even 3-D printing. There were even panels focused on social themes like From Geek to Chic, Women In Gaming, and Can Fandom Break Free of the Geek Social Fallacies

I was able to catch up with Lilith Lore who ran a panel called Lilith Lore’s Poison Apples & Pretty Witches where she re-tells classic fantasy stories adding her own gothic flair. She said she has been going to conventions for a while but it was her first time at RavenCon. Lilith explained how RavenCon was very “book and panel heavy.” She also mention that it was smaller and more low-key than other “cons” she had been to.

But she seemed to like how it was different and surprised at how easy it was to organize a role play.

Another interesting event at RavenCon was filking. The name “Filking” sounds something more like a sex act but Lilith explained, “Filking is folk musicians doing geeky songs and geeky parodies of more mainstream songs. It’s a lot of fun. Thats why we listen to weird al as a kid.” There was a full panel dedicated entirely to Filking. It was these kind of niche hobbies and interests that really made RavenCon unique.

Filking from a different Con

Out of all the speakers, writers and artists at RavenCon each year they invite one Guest of Honor to stand out at the convention. This year the Guest of Honor was fantasy artist Ed Beard.

I thought I’d seen all of what RavenCon had to offer until Ed Beard took me out to see his fully customized Dragon Lord van. We walked out to the parking lot and it was soon apparent which Van belonged to Ed. His van was custom painted with a dragon mural that was nothing short of epic. The mural wrapped around the entire surface area of the van. One side illustrated the origin of dragons and the other side depicted a massive battle between a valkyrie and skeleton demon; both riding on dragons of course.

Then Beard opens the doors and the interior of the van is completely decked out with cave like decor and a full bed. The level of detail was impressive. Every square inch of this van was modified in some way. He even painted the circuit breaker and fuse boxes under the hood. in addition to the aesthetic additions, Beard also upgraded the vehicle’s guts. The Dragonlord Van is fuel injected, boasts 360 horsepower and gets better fuel economy then when he bought it new.

It took Ed 2 ½ years to fully complete the van and now he takes it to shows and conventions like this one. He’s won awards for it and he was even featured on the Today Show. He even got the van appraised at $119,000. Ed says “I never would’ve thought it would become this when I bought this new.” Ed tells a story of a day when he visited the dealership where he originally bought the van. He says “I pulled in and all the mechanics and dealers are staring at it, I roll the window down and said “special factory paint job.” Now he says he can barely take it to a gas station without people gathering around it to take pictures.

RavenCon had a little bit of everything for fans of sci-fi and fantasy. You could go just to browse the vendors or find an interesting panel, there was so much to do. This year was their biggest turnout yet and it seems to keep growing. If RavenCon sounds like something up your alley make sure not to miss it next year.
​